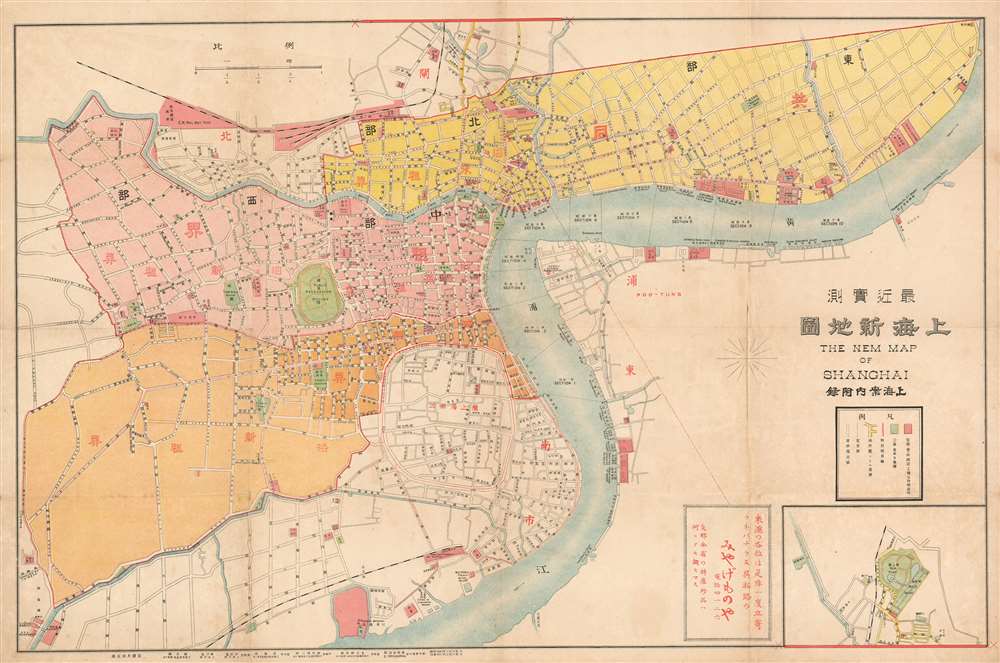 This is the 1917 bilingual 'Nem' map of Shanghai, China by Jin Feng She (金鳳社) / Chojiro Shimazu (島津長治郎). 'Nem' is of course a typo, with the Japanese publisher erroneously inverting the 'W' in 'New'. Centered on the Bund, the primary riverfront business district of the International Settlement, the map covers the International settlement, British Concession (pink), and French Concession (orange)- which had just been radically expanded (light orange area) in 1914. There is an advertisement, to the left of the inset, for 'みやげもの相连' a Japanese specialty and souvenir store on Wusong Road.

This map is unique for its inset in the lower right, actually an extension of the map that can be cut out and pasted to the top of the map, a cleaver and flexible way to deal with irregular urban forms, intended to incorporate the expansion of Lu Xun Park ('New Park'). Also known as Hongkou (Hongkew) Park, this part was initially proposed in 1896 as a shooting range for the multinational Shanghai Volunteer Corps. In 1917, this small park underwent several major expansions, incorporating golf course, tennis courts, a swimming pool and a blowing green. There can be down doubt that interest in these developments inspired the cartography to add it to this map. The park subsequently hosted the Far Eastern Championship Games in 1921.

On April 6, 1849, Lin Kouei (麟桂), the Chinese governor of Shanghai, granted French Consul Charles de Montigny (1805 - 1868) a proclamation ceding extraterritoriality to France in order to establish a trading colony. The Concession initially occupied a narrow collar of land around the northern end of the Chinese City, south of the British settlement, an area of 66 hectares. It was subsequently expended several times. A further small strip of riverside land to the east of the Chinese City was added in 1861, to allow for the Quai de France, docks servicing shipping between China and France. Between 1899 and 1900 the French Concession further expanded, nearly doubling in size with new territory extending west of the original grant. It expanded again in 1914, reaching as far west as modern Huashan Lu (Avneue Haig) - as seen here just 3 years after the expansion. By the 1920s, the western part of the French Concession had become the most desirable residential area of Shanghai, popular both with foreign nationals and wealthy Chinese. The concession was mistakenly bombed during the chaotic 1937 Battle of Shanghai, fought between the National Revolutionary Army (NRA) of the Republic of China (ROC) and the Imperial Japanese Army (IJA). In 1943, the French Concession was handed over to the Japanese puppet Wang Jingwei Regime by Vichy France. The turnover was officially ratified after the war by the Sino-French Accord of February 1946, signed by the French Ambassador and Chiang Kai-shek. Today the French Concession, with its tree lined boulevards and French colonial architecture, remains Shanghai's most desirable neighborhood.

This map was printed on printed on March 16, Taisho 6, 1917, and released 4 days later on March 20. It was issued by Chojiro Shimazu (島津長治郎) of the Jin Feng She (金鳳社) press. Examples are exceedingly scarce. We have identified no examples outside of China, but at least two examples in Chinese institutional collections. There also appear to be at least two editions, one with and one without the inset in the lower right. It is unclear which is earlier.