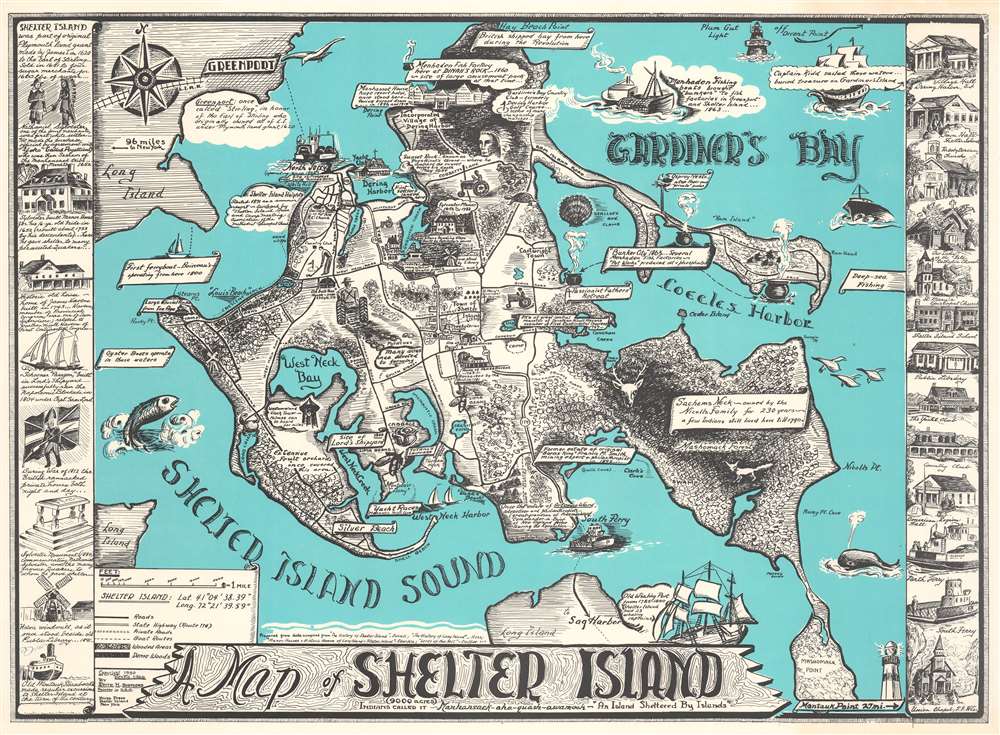 This is Edith Hawkins Shepherd's rare 1966 pictorial map of Shelter Island, Long Island. Shelter Island is 'sheltered' between the north and south forks of Long Island and retains much of its traditional charm amidst the glam and glitz of the Hamptons. Shepherd identifies the basic geography of the island as well as local folklore (the place where Sachem Pogatticut watched the sunset), historical sites (such as the Westmoreland Clock Tower and the site of Lords' Shipyards), and more. The region's agricultural and maritime heritage are emphasized. Even Captain Kidd, the notorious pirate, is noted in the upper right. Historical buildings form sidebars to the left and right of the main map.

This map appeared in two editions, 1950, and as here 1966. It is rare by any measure. We have seen only two examples and have been able to identify only one example in an institutional collection. There are no known examples of the 1950 edition. In all previous examples we have seen, the map has been glued to a board and varnished over, leading to it being in very rough condition. The present map is by contrast unmounted and well preserved. We have encountered only two such examples, and the present example eclipses the other in terms of brightness and clarity, making it the finest known surviving example. A real Long Island rarity.

Edith Hawkins Shepherd (June 4, 1918 - May 6, 2007) was an American artist based on Shelter Island, Long Island, New York. We have been able to trace few facts about Shepherd's life. She is listed in the 1980 New York census as living in Patchogue with her husband. At some point she relocated to Cartwright Town on the eastern side of Shelter Island. We have been told by people who knew her that she was a lively and active woman who enjoyed daily swims in Coecles Harbor, near her home, well into her 80s. Shepherd produced just one known map, a pictorial illustration of Shelter Island, first in 1950, with a revised edition in 1966. Learn More...

Very good. Exhibits light toning only visible on verso. The best example of this piece we have encountered.