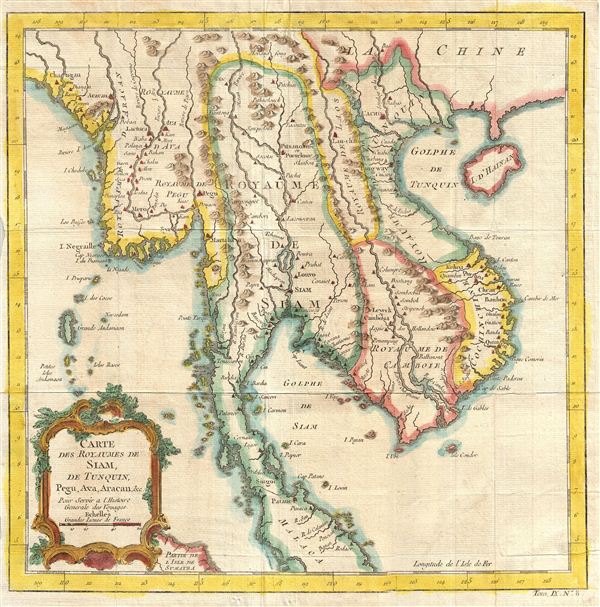 A beautifully detailed and engraved c. 1750 map of Southeast Asia. Centered on the Chao Phraya River, this map covers from the Kingdom of Aracan to the Gulf of Tonkin and from China to the Malay Peninsula, including the modern day nations of Thailand, Cambodia, Laos, Vietnam, Burma, and Malaysia. Generally speaking this map represents a considerable advancement of mapping of the interior of Southeast Asia with numerous cities, fortifications, temples, and mountain ranges noted. Identifies the cities of Siam (Ayutthaya), Bangkok, Lau Chang (Luong Prabong), and Pegu. Many of the island in the Gulf of Thailand, including Samui, and in the Andaman Islands are noted as well.

Drawn by Jacques Nicolas Bellin and published as plate no. 8 in volume 9 of the 1752 French edition of Abbe Prévost's Histoire Générale des Voyages.

Library of Congress, Map Division, g8025.ct002397.
Looking for a high-resolution scan of this?