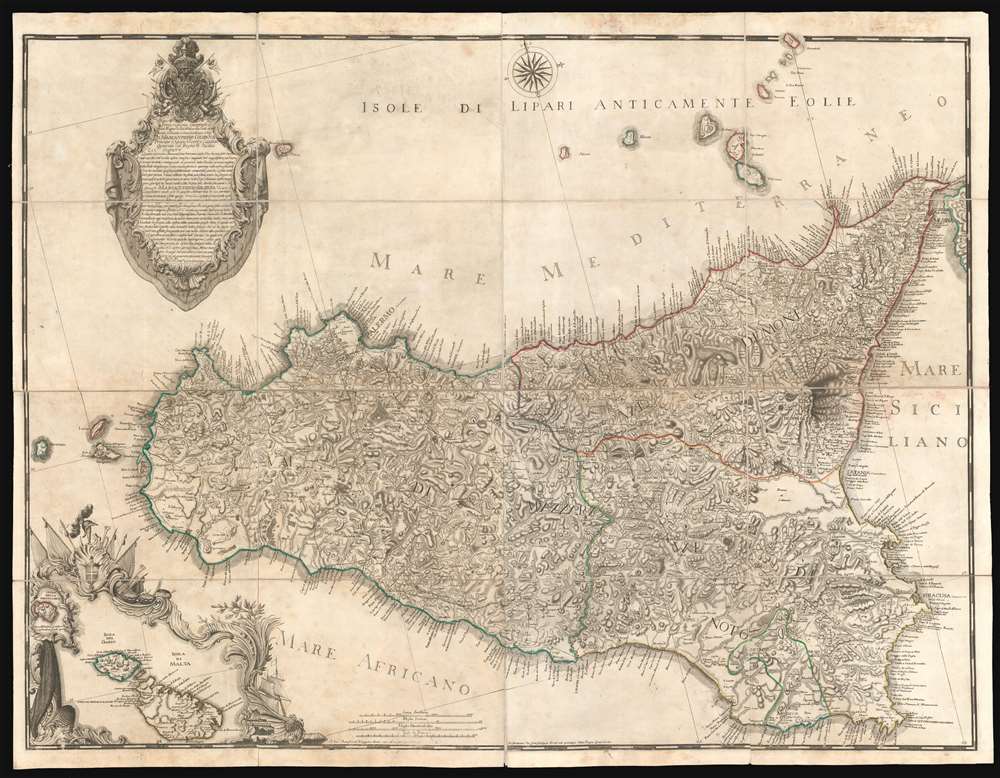 Issued in 1779 by Gian Giuseppe Orcel, this is the greatest map of Sicily to appear in the 18th century. One of the few maps published in Sicily (Palermo), this map is derived from a survey completed in 1720 by the Austrian Field Marshal Samuel Graf von Schmettau, but is much advanced upon, with significant corrections, and on a far grander scale. Oriented slightly to the east of north, coverage extends to the whole of Sicily with the Aeolian Islands, and an inset mapping nearby Malta and Gozo. The map is dedicated to Marc Antonio Colonna II, Prince of Stigliano, who from 1775 to 1781 was Viceroy of Sicily under the House of Bourbon of the Two Sicilies.

This map is closely based upon a 1720 - 1723 survey of Sicily completed by Samuel Graf von Schmettau, but is on a vastly larger scale and features significant updates and revisions, particularly in northern Sicily. The Schmettau survey was precipitated by the War of the Quadruple Alliance (1718 - 1720) between Spain and Austria. Both Austrian and Spanish forces invaded Sicily in in 1718. Spanish and Austrian armies warred back and forth on the island, each claiming battlefield victories, until Austrian forces, with naval superiority, achieved the upper hand in 1720. The Treaty of the Hague in 1720, which formally ended the war, left Sicily in Austrian Hapsburg hands. The original manuscript map drawn by Schmettau during the war, survives at the Austrian National Archives, and was subsequently published in Vienna in 1722-3 under the title Nova et accurata Siciliae Regionum. Although the original manuscript map is comparable in size and detail to the present map, the 1723 published map was actually a much smaller production. Nonetheless, it was the first map of Sicily based upon modern geodetic, astronomical, and topographical survey techniques. The map, and it's derivatives, would remain the definitive map of Sicily until the 1808 - 1809 state survey published by the Palermo Topographical office. Of this 1723 printed map, only 3 examples survive, in the Kriegsarchiv of Vienna, the Newberry Library of Chicago (Novacco 6F 34), and of the National Library of Naples (Palat. VII 61 bis).

This is one of the few 18th century cartographic productions engraved, printed, and issued in Sicily - at the time an intellectual backwater with no publishing industry to speak of. Nonetheless, the publisher Gian Giuseppe Orcel, was able to find an engraver, Garofalo Panormit based in Palermo, to complete his grand ambition. This map is of considerable rarity. We have been able to identify no sales records and only 2 institutional holdings.

Gian Giuseppe Orcel (fl. c. 1775 - 1793) was a French bookseller and publisher based in Palermo, Sicily, during the second half of the 18th century. Orcel opened a bookshop in Palermo, operating in partnership the brothers Martinon, one of who had a shop in Messina. Orcel and a few others were solely responsible for selling and publishing foreign language titles in Sicily and thus keeping the lines of intellectual exchange open. He greatest cartographic achievement was the publication of a massive wall map of Italy based upon the original 1720 manuscript of the Austrian military officer and surveyor Samuel Graf von Schmettau, his expanded and revised map, on a much larger scale the Schmettau's 1723 publication, was the finest and largest map of Sicily yet published.


Samuel Graf von Schmettau (March 24, 1684 - August 18, 1751) was a Prussian Field Marshal and cartographer active in the first half of the 18th century. Schmettau was born in London at the Royal Prussian Amtskammerrat the Embassy of influential Hugueont stock. He joined the military at just 15, serving under various flags for various commanding officers, most of whom were his relatives. He saw battle on multiple occasions and rose quickly through the ranks, being made major in 1707 and lieutenant colonel in 1708, and field marshal lieutenant in 1733. In 1741 he was made Imperial Field Marshal, but transferred to the Prussian Army to become instead Prussian Field Marshal. In 1842 he received the Order of the Black Eagle. He was an excellent self-educated cartographer, producing his first map, a detailed survey of Sicily issued in 1723. A plan of Berlin followed in 1748, and a plan of Ostfriesland in 1751.


Garofalo Panormit (fl. c. 1750 - 1800) was an Italian engraver based in Palermo and Rome. Most of his extant work consist of ecclesiastical portraiture. In 1779 he did engrave one large map of Sicily in partnership with the French/Sicilian publisher Gian Giuseppe Orcel.