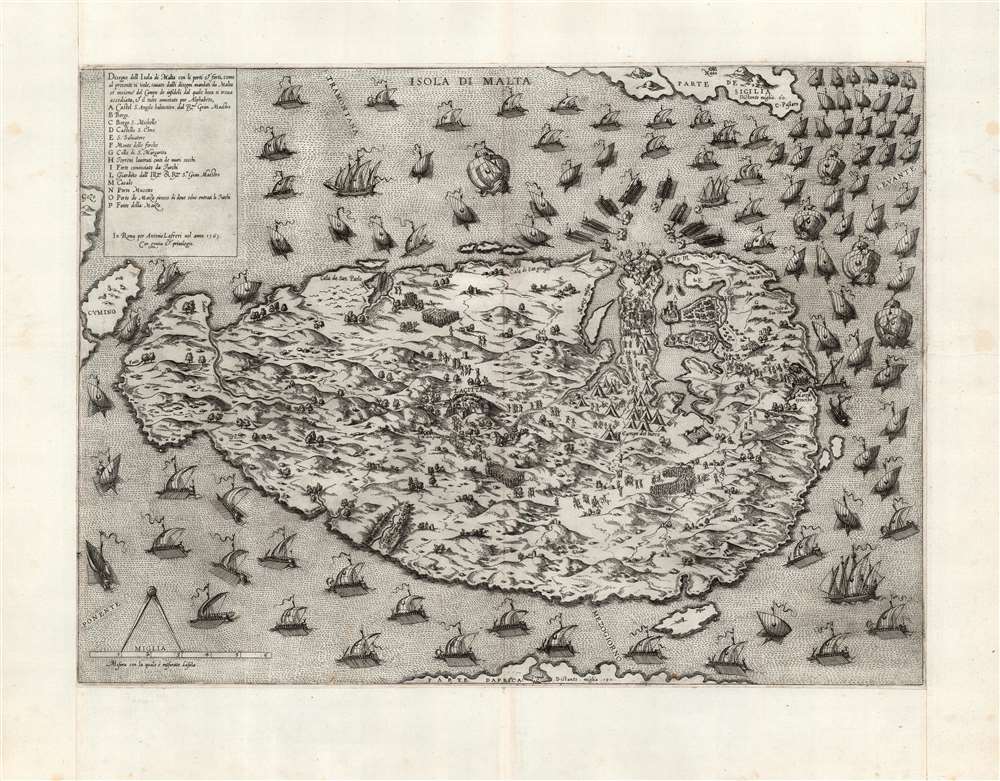 Contemporaneous Depiction of the Most Celebrated Battle in 16th Century Europe.
$27,500.00

This is an extremely rare and striking 1565 Antonio Lafreri map of the island of Malta, in the midst of the momentous Great Siege of Malta in 1565, engraved just a month into the four-month-long battle. At the time, Malta was the last major redoubt of the Knights Hospitaller, a militant monastic order of the Catholic faith that can trace its origins to the Crusades. The siege was thus framed in Europe as an epic good-vs-evil struggle between European Christianity and the Islamic Ottoman Empire. The ultimate defeat of the Ottoman forces became one of the most celebrated events not only of the 16th century, but for centuries to come: in the eighteenth century, the French writer, historian and philosopher Voltaire write, 'Nothing is better known than the siege of Malta.'

Although modern historians disagree about the importance of the Siege, to contemporaries the unfolding events on Malta were of widespread alarm and interest: Queen Elizabeth I of England wrote that If the Turks should prevail against the Isle of Malta, it is uncertain what further peril might follow to the rest of Christendom. From its earliest days, news of the Siege captivated Europe. Lafreri's rapid production of this superb engraving shows both his exacting awareness of events, and a shrewd sense of market demand. The lasting fame of the Siege, at least in part, is due to maps such as this. Of the many printed works recording and celebrating the siege, this is the first, drawn and published in June 1565, barely a month into the four-month-long battle, and the best, made by one of Italy's great cartographic masters.

Background of the Siege

The Hospitallers established their headquarters in Malta in 1530, tasked by Holy Roman Emperor Charles V to hold the island as a naval base. This was an effort to project Christian power across the Mediterranean, and to interfere with the Muslim Barbary Corsairs, allies of the Ottomans. It put the Knights particularly at odds with the famed Ottoman naval commander, Turgut Reis (1485 - 1565), or as he was known to the west, 'Dragut.' Dragut was renowned as the most dangerous of the Corsairs, a military genius and legendary pirate. The Hospitallers, now known as the Knights of Malta, were accomplished pirates in their own right, albeit focusing their efforts on non-Christian shipping. The Ottomans and Knights of Malta alike sent thousands of captives into slavery during the course of the decades-long conflict. A coup scored in 1564 by the Knights (the capture of the governors of Cairo and Alexandria, aboard a booty-laden ship, owned by the chief eunuch of the Sultan’s Seraglio) led the Sultan to commit to utterly destroying the Christian presence on Malta.

The map includes a letter key, indicating key positions for both the Maltese defenders and the Ottoman attackers and detailing the very initial stages of the siege: the Naval blockade of the island, the beginning of the attack on Castel St. Elmo, and the early Turkish investiture and the isolation of Maltese forces in and around Valetta. The armies themselves, the fortifications, and the fleet are shown pictorially and with dramatic verve. The main defenses of the Knights of Malta were in and around the Grand Harbor of Valetta at the Castel de St. Angelo (A,) the Birgu (B), and the Birgu S. Michelle (C,) and the fort of St. Elmo (D.) The Ottoman fleet, thought to be the largest assembled since the classical era, crowds the waters. Galleys are shown exchanging fire with the garrison at Castel St. Elmo. At the same time, the Ottoman armies set up camp at the base of Sciberras Peninsula near the Fountain of Marza (P). Further along the peninsula, the map shows at (I) a Forte cominciato de Turchi (Fort begun by the Turks) at the base of the Sciberras Peninsula, to cut off Valetta and St. Elmo from the rest of the island. This fort would, on May 27 begin a relentless bombardment of Castel St. Elmo but there is no indication of this yet. In the early days of the siege, the Ottomans would also set up batteries on Santa Margherita Hill, but that location (G) shows no such activity. Turkish soldiers can be seen disembarking at the Marza Syroccho, and moving towards the forts at A, B, and C but there is no indication yet of the attacks on the Birgu and the Senglea peninsula which would occur on May 21 and 22 respectively.

Thus, the map depicts the very earliest days of the siege: before the June 23 fall of Castel St. Elmo, before the relief of the Maltese garrison, and before the eventual breaking of the Siege. The map shows the field of battle when all still remained in the balance. In its captivating depiction of contemporary events still fully in motion, this map qualifies as one of the very first printed broadside news maps.

The map, oriented to the northeast, presents some of the qualities of a bird's-eye view in its oblique presentation of Malta's topography, and its pictorial representation of forests, towns, fortresses and marching soldiers. Also, while the island itself is shown with its features in accurate proportion with each other, it is greatly distorted in relation to the rest of the Mediterranean: the coastlines of Sicily to the northeast and of Africa (and, specifically, Tripoli) to the south are shown without the benefit of accurate scale: Lafreri includes them to fix Malta's position in relation to them, but also by shrinking the sea areas he is able to exaggerate the proximity of the island to those key locations. Also, by doing so he is able to emphasize the vastness of the Ottoman fleet, and the completeness of their envelopment of the embattled Malta.

This map was engraved in June 1565 for distribution as a separate sheet. The trimming of the page and the broad extension of the margins indicates that it was later included in one of Lafreri's composite, made-to-order atlases. This example corresponds to what Tooley characterized as the first state of the map, but Bifolco has determined this to be a second state. We see only three examples of this map cataloged in OCLC, appearing in the British Library, the Bayerische Staatsbibliothek, and Studienbibliothek Dillingen.

Antonio Lafreri (1512–1577), born Antoine du Pérac Lafréry, was a Burgundian engraver, cartographer and publisher active in Rome in the 16th century. Apart from his birth in Orgelet in Burgundy, nothing is known about his early life, education or training. He is thought to have arrived in Rome by 1540 and was established as an engraver and printmaker in 1544. He became a business partner with Antonio Salamanca the Elder in 1553, until his partner's death in 1562. He would continue in the trade as a successful publisher of maps in the 1560s, and by 1570 he was selling made-to-order atlases both of his own maps and those of his collaborators. By the time of his death he was the leading dealer of engravings in Rome. His work was instrumental in disseminating the geographical ideas of Giacomo Gastaldi, but his battle scenes and maps focusing on the wars between Venice and the Ottoman Empire (particularly the famous Siege of Malta) are particularly prized. He is also noted for his 1758 Speculum Romanae Magnificentiae, a three volume collection of engravings of Rome.Other mapmakers in Rome and Venice sharing both Lafreri's aesthetic and geographical sources such as other Battista Agnese, Antonio Salamanca, Francesco Camocio the Younger, Donato Bertelli, Ferando Bertelli and Paolo Forlani are collectively generally referred to as belonging to the 'Lafreri' school of mapmakers, although this was not a formal organization. The terms 'Lafreri Atlases' and 'IATO (Italian, Assembled To Order) Atlases' are used to refer to the same class of works. He died at Rome in 1577. Learn More...

Fine. Trimmed to platemark and re-margined in the Lafreri manner but with none of the expected trimming. A bright, superb example with a bold, sharp impression.