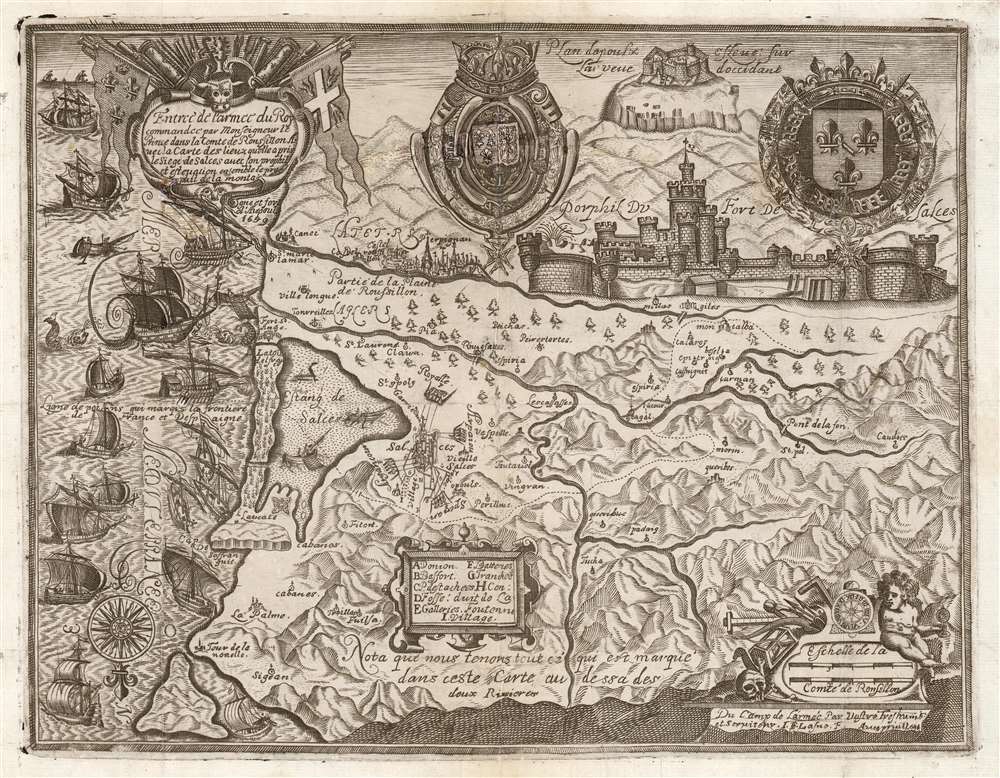 This is a rare and highly evocative 1639 Jean-Etienne Lasne map of the region around Salses-le-Château, Roussillon, France, depicting its first siege during the Franco-Spanish War (1635 - 1659). The south-oriented map embraces the Province of Roussillon, including the Étang de Salces (Étang de Leucate), the cities of Salces, Leucate, and Perpignan, and other towns.

At the left side of the map - the east - the Mediterranean coast is full of the galleons and rowing galleys of the attacking French fleet. The map is embellished with the coats of arms of Henri II, Prince of Condé, and the arms of the King of France and Navarre. Below these is an accurate profile view of the Fortress of Salses - recognizable even today, with the fort's defenses having been updated in the eighteenth century - and a view of the Castle of Salvaterra, or Opoul, a mountaintop castle overlooking Salses. The mountainous terrain of the French Pyrenees is boldly depicted. A dotted line weaving through the mountains marks the border between Spain and France: Salses appearing south of it, in Spanish territory.

The fortress of Salses-le-Château was built by Spanish architect Francisco Ramiro Lopez in the late 15th century to defend the Catalan border. Its specific site was chosen because of its access to fresh water springs, an essential element for withstanding siege. Nevertheless, static fortifications were not immune to capture, and Salses was no exception. During the Franco-Spanish war it and its garrison town would be captured by the French in 1639, recaptured by Spain in 1640, and ultimately recaptured by the French in 1642.

Salses-le-Château (named Salces on the map, as spelled in Spanish and Catalan) appears west of the saltwater lagoon Étang de Salces, on the Mediterranean coast. Here it is surrounded by besieging French forces during the 1639 first Siege of Salces. This French army of 16,000, led by Henri II, Prince of Condé, captured the fortress after ten days. The map details the French batteries and trenchworks arrayed against the fort, the fort's conduits to its fresh springs, and the other key features. The four French batteries are labeled with their commanders.

The success of the siege was short-lived. Six weeks later the Spanish returned with an army of 40,000, which besieged the French garrison of 2,000. An army sent by Condé to lift the siege was defeated in battle, and hunger forced the French to surrender on January 6, 1640. By this time only 800 Frenchmen remained, 300 of whom were sick. The Spanish also lost 10,000 men to disease and desertion. The French returned in 1642, capturing the city of Perpignan (also depicted) and retaking the fortress. The whole of the province would pass to the French by treaty in 1659, by which time both the French and Spanish had been exhausted by war.

This copperplate engraving bears the imprint of Jean-Etienne Lasne (1596 - 1645), and is unlikely to have been engraved later than 1639 - there is no reference to the Spanish recapture the following year. We have identified no other example of this separate map in institutional collections and we see no record of it having appeared at auction or on the market. We have been unable to identify any text containing the work, and it is possible that this represents the sole surviving example.

Jean-Etienne Lasne (1596-1645) was a French engraver and illustrator; brother of the better-known and more prolific Michel Lasne (1594-1667), who became official engraver for King Louis XIII in 1633. The brothers were sons of a goldsmith. Two maps are known to bear Jean-Etienne's imprint: a 1628 plan of Rochelle, and a c. 1640 map of the region around Salses-le-Château depicting the 1639 siege. He appears mainly to have engraved illustrations and portraits; most of his known, signed output bears dates between 1622 and 1629. Learn More...

Good. Two areas of restoration at junctures of folds, with manuscript reinstatement of portion of Royal Arms. Else a bold strike with generous margins.
Looking for a high-resolution scan of this?