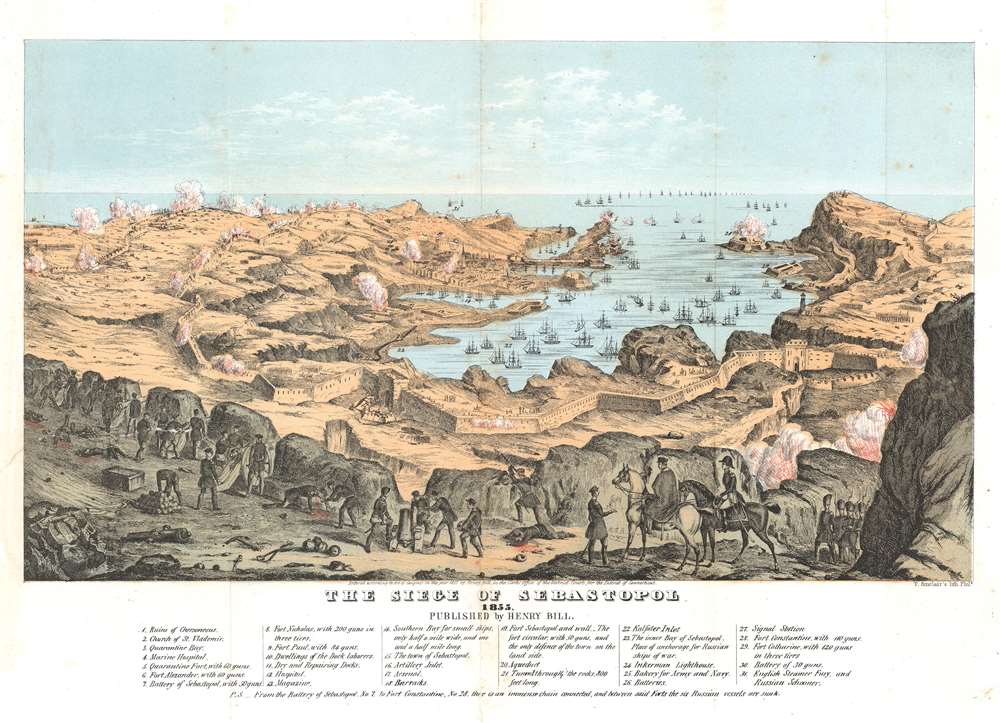 This is an 1855 Henry Bill view of the siege of Sevastopol (Sebastopol) during the Crimean War. Overlooking the city from the east. The defensive walls are apparent, along with the siege works constructed by French, British, Sardinian, and Ottoman armies (the Allies). Allied troops appear in the foreground lobbing artillery shells at the besieged Russians. The Russians, from the walls, return the fire. Russia's Black Sea Fleet engages the allied navies in the bay. Two wounded soldiers spill blood in the foreground. Thirty-four locations, including several forts, batteries, a signal station, a hospital, and magazine, are numerically identified and correspond with an index included below the view.

The Siege of Sevastopol

The siege of Sebastopol, the final battle of the Crimean War, took place from October 1854 until September 1855. Sevastopol is remembered as one of the great sieges. The city housed Russia's Black Sea Fleet, which posed a threat to the entire Mediterranean. The great author Leo Tolstoy was then a 26-year-old artillery officer in the Russian army and survived the 11-month siege. He later immortalized the events in his Sebastopol Sketches.

The Crimean War, fought from October 1853 to February 1856, was an armed conflict between the Russian Empire and an alliance of the Ottoman, British, French, and Sardinian forces. The root cause of the war has never been fully understood, but the stated impetus was to defend the rights of Christians in the Holy Land, with the Catholic interests supported by the French and the Greek Orthodox Church by the Russians. The more likely root was British and French concerns about Russian expansion into the Bosporus and Mediterranean at the cost of the declining Ottoman empire.

Hostilities erupted in July 1853 when Russia invaded two Ottoman suzerainties known collectively as the Danubian Principalities, labeled here as Wallachia and Moldavia. The Ottomans immediately responded, fighting a defensive campaign that halted the Russian advance at Silistra, which the Russians besieged. Alarmed by the possibility of an Ottoman collapse, the British and French entered the war, sending troops and supplies to Gallipoli. They did not arrive at Silistra until after the Russians had withdrawn.

By this time, public opinion in Britain and France, where discontent at the seemingly wasted effort and expense of sending armies to the Balkans, turned against the war. Hoping to finish the war quickly, the allies invaded the Crimean Peninsula in September, hoping to seize the Russian naval port of Sevastopol, thereby limiting Russian ability to wage war in the Black Sea arena. The supposedly 'quick and easy' siege lasted for eleven months. Russia finally sued for peace in March 1856 and in the subsequent Treaty of Paris, Russia lost its Black Sea ports, Wallachia and Moldavia gained a modicum of independence, and Christians in the Holy Land were given a degree of equality.

This view was lithographed by Thomas Sinclair and published by Henry Bill in 1855. We have identified examples in the institutional collections at Dartmouth College and Brown University.


Thomas S. Sinclair (c. 1805 - 1881) was an American lithographer. Born in the Orkney Islands, Scotland, Sinclair studied lithography in Edinburgh and other European cities before moving to the United States sometime before 1833. He was established in Philadelphia by 1833, when he drew a dancing scene for the firm of Kennedy and Lucas, which went out of business that same year. In 1838, Sinclair acquired the press of John Collins and opened his own lithography firm. He was among the first lithographers in Philadelphia to experiment with color lithography, beginning in 1843. By 1848, his skills ad advanced to such a degree that he won a silver medal for color lithography at the Franklin Institute's exhibition. Sinclair's brother, William B. Sinclair, joined the firm in 1854, and from that year until 1859 the establishment was known as Thomas Sinclair and Company. His son joined the company at one point also, and then the firm's name changed to Thomas Sinclair and Son. Sinclair died in Philadelphia in 1881. Learn More...

Very good. Exhibits light wear along original fold lines. Exhibits some foxing. Blank on verso.
Looking for a high-resolution scan of this?