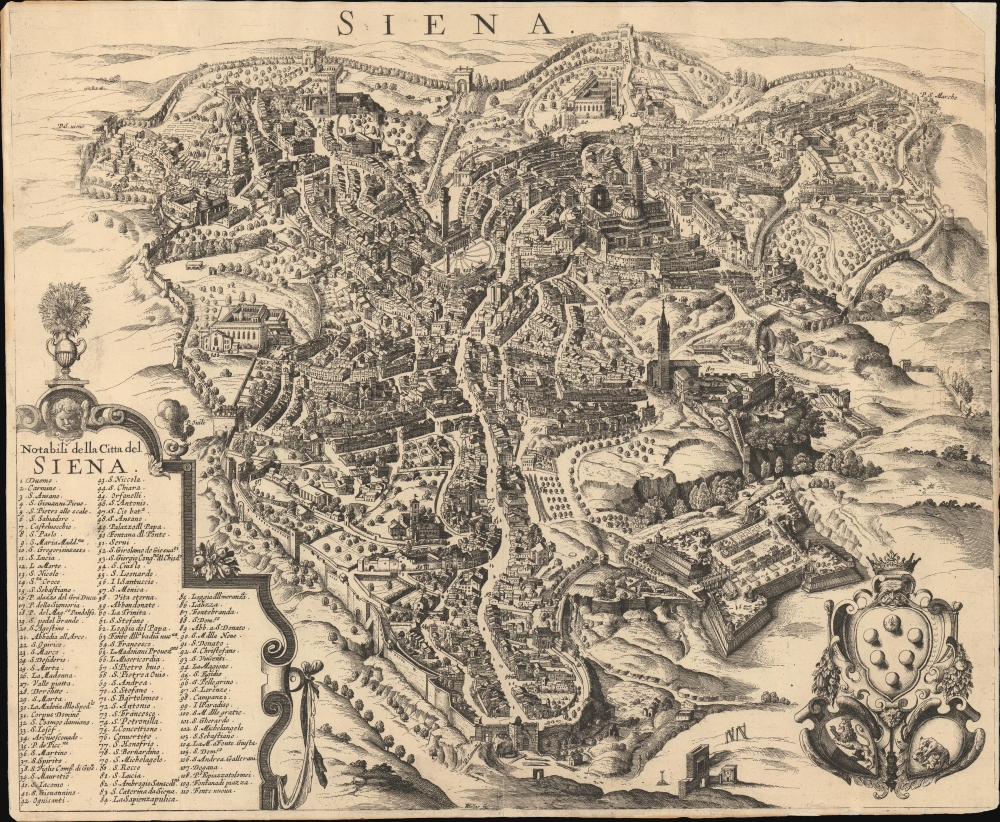 A striking c. 1636 first edition view and map of Siena, Italy, by the Czech master engraver Wenceslaus Hollar. The view is oriented with southeast at the top - so the distinctive Duomo di Siena appears in the upper right quadrant. The famous Via Banchi di Sopra, the city's main artery, winds through the center of the view - with tiny pedestrians recognizable. The city's impressive curtain wall, constructed around 1416, and the Fortezza Medicea, built from 1561 to 1563, present a prosperous and highly defensible town. The armorial crest of Grand Duke of Tuscany Cosimo I de' Medici (1519 - 1574), appears in the lower right, and in the lower left, a numerical key identifies some 110 significant locations.

Cartographically, this map is based upon a 1595 map drawn by the Italian mannerist painter Francesco Vanni (1563 - 1610) and engraved by Pieter de Jode (1570 - 1634). This map is nonetheless quite different stylistically, benefiting from Hollar's masterful engraving and personal flourish.

The map was likely engraved in Cologne between 1634 and 1636, when Hollar was a resident there. It was intended for Abraham Hogenberg's continuation of the Braun and Hogenberg town view series. The plate was subsequently passed first to Jan Jansson (c. 1657), then to Frederick de Wit (c. 1694), then to Pieter van der Aa (Leiden, c. 1715). We are unaware of plate changes between the first issue and the Van der Aa issue, so it can be difficult to distinguish editions, particularly between the Hogenberg and De Wit. The main difference between the Hogenberg and De Wit issues will be in the paper, as paper making changed somewhat between the early and late 17th century. The current example's paper is thicker than De Wit paper, more akin to Hogenberg paper. Early examples from the first issue, as here, lack verso text, first added by Jansson in 1657. Van der Aa retitled the plate, 'Sena Urbs Hetruriae'. Rare.

Wenceslaus Hollar (July 23, 1607 - March 25, 1677) was a Czech / Bohemian artist, etcher and engraver, much of whose life was spent in England. He is known primarily for his engravings and etchings, of which nearly 2800 plates are known. These include a number of excellent maps and city views. He was born in Prague where he initially studied law. The 1620 Sack of Prague during the Thirty Years' War (1618 - 1648) ruined his family's fortunes. Hollar came out of the disruption on the path to becoming an artist. His earliest known works are small engravings, one of which was a copy of a Dürer 'Virgin and Child' and the other is very likely a 1625 outline map of Europe. By 1627 he was in Frankfurt, apprenticed to engraver Matthias Merian (1593 - 1650). Following his apprenticeship, he traveled throughout the Rhineland producing views of towns, castles, and landscapes. His work eventually attracted the notice and patronage of nobleman and art collector Thomas Howard, 21st Earl of Arundel (1585 - 1646). Hollar traveled with Howard from 1636 as a draftsman for the Earl's diplomatic mission to the court of Holy Roman Emperor Ferdinand II (1578 - 1637), as well as to Vienna and Prague. He also accompanied Arundel to England in 1637, where he remained for many years attached to the earl's household. He was not exclusively in the Earl's employ, producing work for many authors and publishers. He produced some very famous views of London following the Great Fire, and was sent in 1668 by the King to Tangier in order to produce views of the towns and forts there. He produced a number of maps for Richard Blome's subscription atlas, the first English atlas actually engraved in England. Unfortunately, his ties with the loyalists during the English Civil War (1642 - 1651) sharply affected his sales, and his patronage declined. He appears not to have been a particularly apt businessman: a friend is recorded as having said of him that he was, 'a very friendly good-natured man as could be, but shiftlesse to the world.' It cannot have helped matters that he only charged a shilling an hour for his labors. Despite the quality of his work, he would die in poverty. Learn More...

Good. Some corner repairs. Even overall toning. A few minor edge tears reinforced on verso. Strong early strike off the plate.
Looking for a high-resolution scan of this?