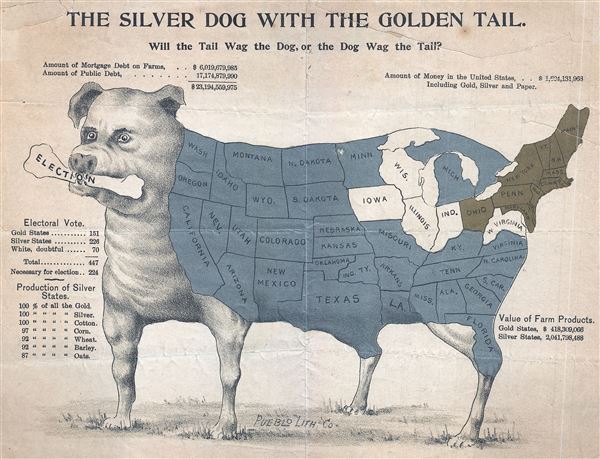 An exceptionally rare 1896 broadside political cartoon, probably by Myron A. Root, depicting a porcine dog embraced within the framework of a United States map and the title 'The Silver Dog with the Golden Tale.' Arguably the first edition. The map askes the question, 'Will the Tail wag the Dog, or the Dog Wag the Tail?' This caricature, created by the Myron A. Root, humorously illustrates the major political debate driving the 1896 presidential runoff between Republican William McKinley and Democrat William Jennings Bryan.

The election's primary issue was the replacement of the gold standard for a silver standard. Previously, the United States operated on a bi-metallic system, wherein both gold and silver coins were minted, representing high and low value currency denominations, respectively. This system was only effective as long as the value of both coins remained consistent.

Before 1873, anyone with gold or silver bullion could go to the federal mint and have it struck into coinage. The explosion of silver from the Comstock Lode and the Colorado Silver Boom dramatically lowered the value of silver. In response to silver's instability, the Federal Government demonetized silver currency following the Panic of 1873, in an act of Congress that become known as the Crime of '73. Mine owners and other silver bullion holders - mostly living in the west, could no longer have their silver struck into coin. This led a decrease in circulating currency that was advantageous to creditors at the expense of debtors. A major political issue pitting those who valued the deflationary gold standard against those who believed free coinage of silver to be necessary for economic prosperity.

The 1878 Bland-Allison Act and the 1890 Sherman Silver Purchase Act, partially reversed the Crime of '73. The Acts required the Fed to purchase set amount of silver annually. The effect led to a sharp drop in gold reserves at the U.S. Treasury, precipitating the Panic of 1893. Congress responded by repealing the Sherman Act, again limiting the minting of silver coinage from bullion. Wealthy banks and creditors in New England approved of the act, which stabilized the U.S. dollar. In the west, particularly in Colorado, around Denver, where silver mining was the primary source of wealth, the act prevented people from turning their bullion into funds. Moreover, those who need regular loans from banks and merchants in order to plant cash crops - the rural west - found that the available money supply had nearly dried up.

Free Silver vs. the Gold Standard

The solution, as embraced by the populist Bryan, was derived from a c. 1894 booklet entitled Coin's Financial School by 'Professor Coin' who advocated for free minting of silver coins, a.k.a Free Silver, and an abandonment of the gold standard. Most larger businesses, all of which were centered in the small but populous and powerful New England and Middle Atlantic States, were opposed to such a transition, believing it would disrupt the American economy. The American political scene was thus divided between rural areas, represented by Democrat William Jennings Bryan, who supported the unrestricted minting of silver coins, and the more industrial northeastern states, represented by William McKinley, who advocated for retaining the status quo gold standard.

Thus, the cartoonist asks 'Will the Tail Wag the Dog, or the Dog Wag the Dog' with the implication that the interests of the gold northeastern states, who were comprised of an economic and business elite, would come to dominate the silver states. The 'silver dog with the golden tail' is essentially an electoral map with Democrats representing by the 'silver states' and Republicans by the 'gold states', doubtful states are left uncolored. Ultimately, the economic superiority of the Republican Campaign, which appealed to big business to dramatically outspend their Democratic rival, resulted in a victory for McKinley. The gold standard was kept until 1933.

The common wisdom is that his cartoon first appeared in the September 13, 1896 issue of the Boston Globe, however, we can find no justification for this assumption and believe it to be false. Instead, we argue that the cartoon was first drawn and issued Colorado by Myron Root, where it would have been most poignant and represented western values and interests. We are aware of another example to bearing a copyright (of sorts) and signed by Denver cartoonist, Myron A. Root. Of the known examples, two were issued in Colorado: this example by Pueblo Lithography, and said another copyrighted by Myron Root. The Boston Globe issue is less refined but closely copies the Root example - suggesting imitation. Subsequently, the 'silver dog' became a popular electioneering trope and was re-printed by several lithographers, including Pueblo Lithography and the Gillin Print Co. of New York, among, presumably, others.

All examples of this map are extremely rare. We are aware of one Pueblo Lithographic example at the P J. Mode Persuasive Cartography collection at Cornell. The Museum of the City of New York owns a larger format example issued by Gillin Print Company of New York for the Kings County Regular Democratic Campaign Committee. Not present in the OCLC.

Average. Backed with archival tissue. Some repairs splits and cracks.
Looking for a high-resolution scan of this?