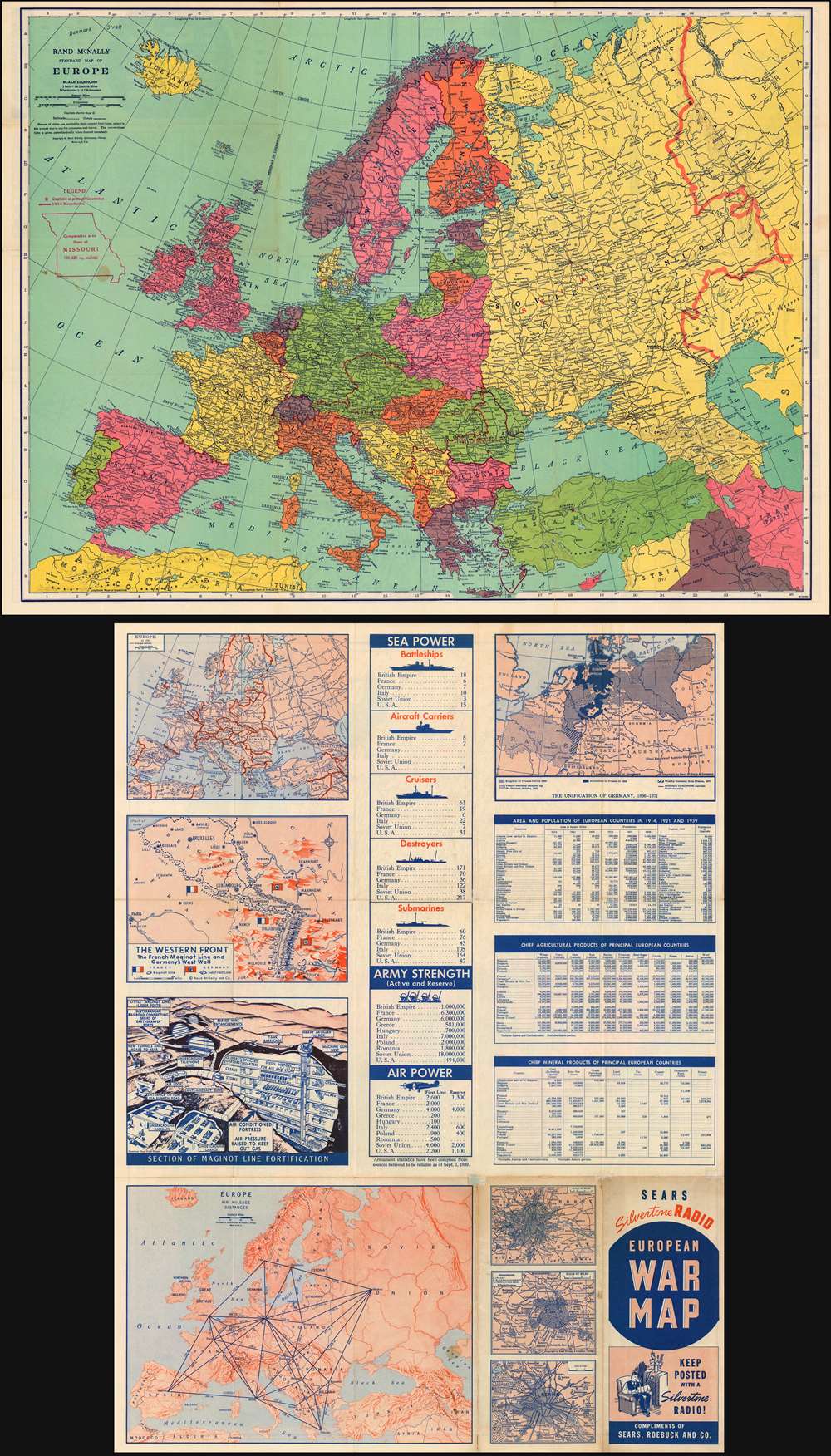 This is a 1940 Rand McNally Map of Europe, published for Sears and Roebuck as a promotion for their Silvertone line of electronics - 'Keep Posted with a Silvertone Radio!' The recto map displays what was, for the American audience, the expected theatre of what would undoubtably be a simple re-play of the first World War: the continent of Europe. The brightly-colored map shows the 1939 national boundaries, with pre-World War borders marked in red for reference. (Thus, the borders of Austria-Hungary and the Balkans can be seen, as can the pre-Soviet Russia.) To provide a sense of scale for the American reader, an outline of the State of Missouri has been added - suggesting that any one of the players in the upcoming conflict was barely the size of just one small part of the United States.

This is a compendium of recent European history, and contemporary statistics. There are four maps: one shows the post-Versailles borders of Europe as of 1921; another details the process of the 19th century unification of Germany - reinforcing the idea that the upcoming war was just another in an inevitable series with a historical foe. In keeping with this retrospective view, a detailed map of the Western Front marks the heavily fortified border between France and Germany: the Siegfried Line and the Maginot Line, both shown pictorially with pillboxes facing off against each other toe-to-toe - until the lines separate at Belgium and Luxembourg. (A fourth map marks the distances, by air, between major European cities - one of the few acknowledgements here that the next war might be different from the last.) There is a detailed, largely imaginary, and tragically optimistic cut-away diagram of the apparently impregnable fortifications of the Maginot line, linked by subways and offering its soldiery all the comforts of a modern city while they defend France against any German foe willing to make a frontal assault against its emplacements. There are city plans of London, Paris and Berlin - again, suggesting that no other major players might exist in the coming war.

Statistics of national arms and populations compare sea power, army strength, and air power - with the United States trailing in most categories. Three tables compare land mass, population changes since 1914, and chief mineral productions among the European nations. The implication throughout is that the United States - though able to protect itself with a strong navy and air force - would be well advised to avoid committing land forces to what would surely be a European affair. Japan, of course, is mentioned nowhere.

We have identified only a single state of this map, and it appears to have been produced in a single edition. It is neglected by institutional collections: OCLC has a single copy at UCLA. The vigilant collector will find examples of this map, but it has evaded dealers' catalogues and it does not appear in auction records.