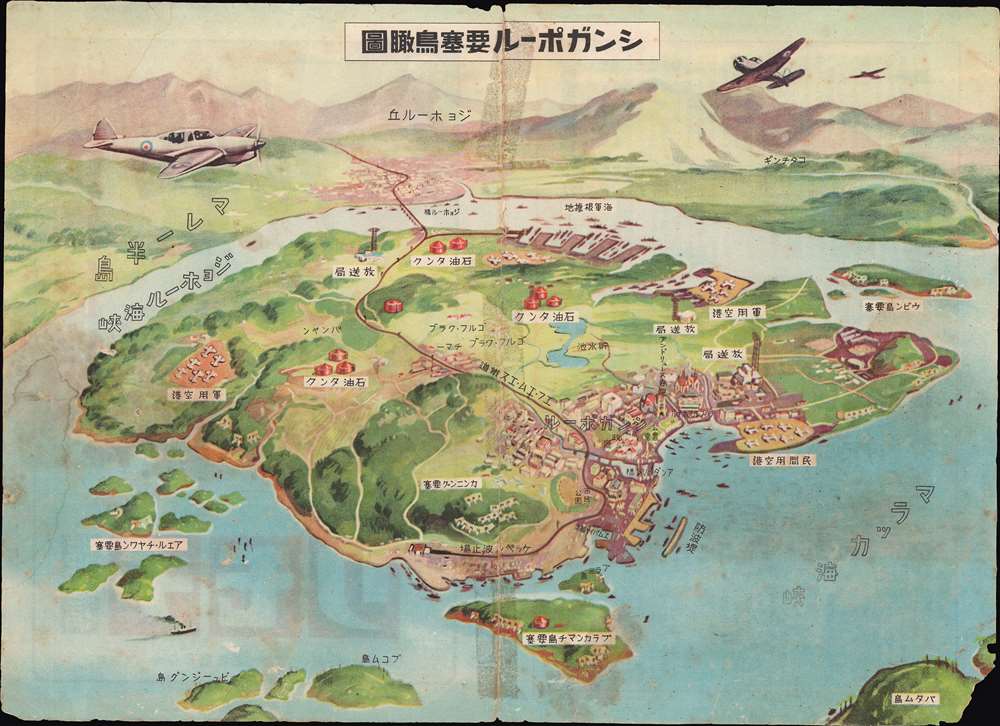 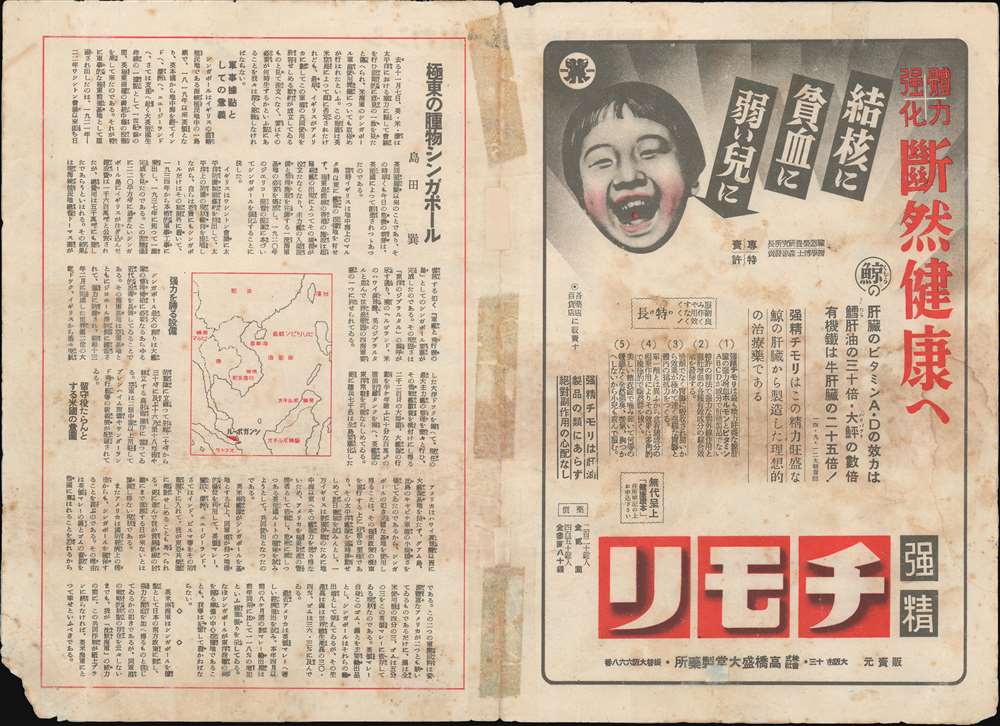 Planning for an attack on Fortress Singapore.
$450.00

This is an extremely rare c. 1941 Japanese-issued bird's-eye view of Singapore, emphasizing fortifications, oil facilities, and airfields. Soon after its publication, Singapore fell to Japanese forces in a single day. The defeat was considered by Winston Churchill, 'the worst disaster and largest capitulation in British history...'

Although somewhat cartoonish in appearance, this view is squarely focused on military installations and resources that would be critical in any battle for the island. Fortifications on the outlying islands of Ayer Merbau (at left, now part of Jurong Island after land reclamation), Belakang Mati (at bottom-center, now Sentosa), and Ubin (at right, towards top), as well as on Singapore Island are visible. At top-center is the Johor-Singapore Causeway, opened in 1924 and still in use today, though it was damaged by the British to slow the Japanese advance in early 1942. Three airfields are noted, one civilian and two military, although a fourth airfield is visible next to the naval yard.

On the verso (back) of the view is, at right, an advertisement for Tsuyo sei chimori(強精チモリ), a supplement meant to improve blood and liver health, made by the Takahashi Seidaido Pharmacy (高橋盛大堂製藥所) in Osaka. The left side is an article titled 'Singapore - the Tumor of East Asia' by Shimada Tatsumi (島田巽), the Chief of the British-American Bureau and Deputy Chief Editor for the Asahi Shimbun (朝日新聞). The article examines the strategic importance of Singapore as threat to Japan in Southeast Asia, focusing in particular on the British, American, and Australian navies' use of the port.

Japan's invasion of British Malaya is famous in military history for its unexpected rapidity. Only one railway and one or two major roads, depending on the area, ran north to south through the peninsula. The British tried to slow the Japanese advance by blowing bridges and adopting scorched earth tactics, but Japanese preparations (such as pontoon bridges) and speed were difficult for the British to counteract. Memorably, many Japanese troops had been provided bicycles and were able to move down the Malay Peninsula at a considerable pace. The British, long fearing an attack by Japan or other contenders in Asia, built dozens of fortresses in Singapore, leading to its nicknames as 'fortress Singapore' and the 'Gibraltar of the East.' However, they were far less prepared for an invasion from the direction of the Malay Peninsula, across the Straits of Johor, which they considered nearly impossible given the dense jungle that covered much of the Malaya.

The Fall of Singapore

The rapid Japanese advance through Malaya, the war in Europe drawing the bulk of British attention, and the sinking of the best British ships in Asia (the Repulse and Prince of Wales) left Singapore ill-prepared for a defense. Despite a three-to-one advantage in troops and the benefit of being the defenders, the British were demoralized, and the British leadership (especially Gen. Arthur Percival) committed a series of blunders, providing the Japanese opportunities for victory despite a weak hand. For their part, the Japanese had effective commanders and were in high spirits from their rapid capture of Malaya. With limited supplies and no clean drinking water, having lost most of the island, Percival surrendered unconditionally on February 15, 1942, not realizing that his enemy was also extremely low on supplies and would have been unlikely to prevail in a battle for the urban center. It remains one of the worst disasters in British military history.

This birds eye view is not dated and provides no publication information. Inferring from the article on the verso, this map likely appeared in 1940 or 1941 when tensions between Japan and Western powers were high, but before the outbreak of the Pacific War. As the author of the article Shimada Tatsumi (島田巽) was a prominent journalist with the Asahi Shimbun (朝日新聞), it is likely that this map appeared in the Asahi Shimbun flagship newspaper or one of the various other periodicals and publications put out by the Asahi Shinbunsha (朝日新聞社). This map is not known to exist in any institutional holdings and is very scarce to the market.

﻿Shimada Tatsumi (島田巽; January 25, 1905 – March 8, 1994) was a journalist, author, and civil servant who served as the Chief of the British-American Bureau and Deputy Chief Editor for the Asahi Shimbun (朝日新聞). He later took a leadership position with the National Personnel Authority (人事院), a civil service management agency. An expert on British and European politics, he published a number of works on those topics and later in life developed a keen interest in mountaineering and nature. He also published article and book length translations in the fields of European politics, journalism, and mountain climbing. Learn More...

Average. Wear and previous repairs along fold line in middle. Some loss along margins, especially at bottom-right. Dampstaining at left margin.
Looking for a high-resolution scan of this?