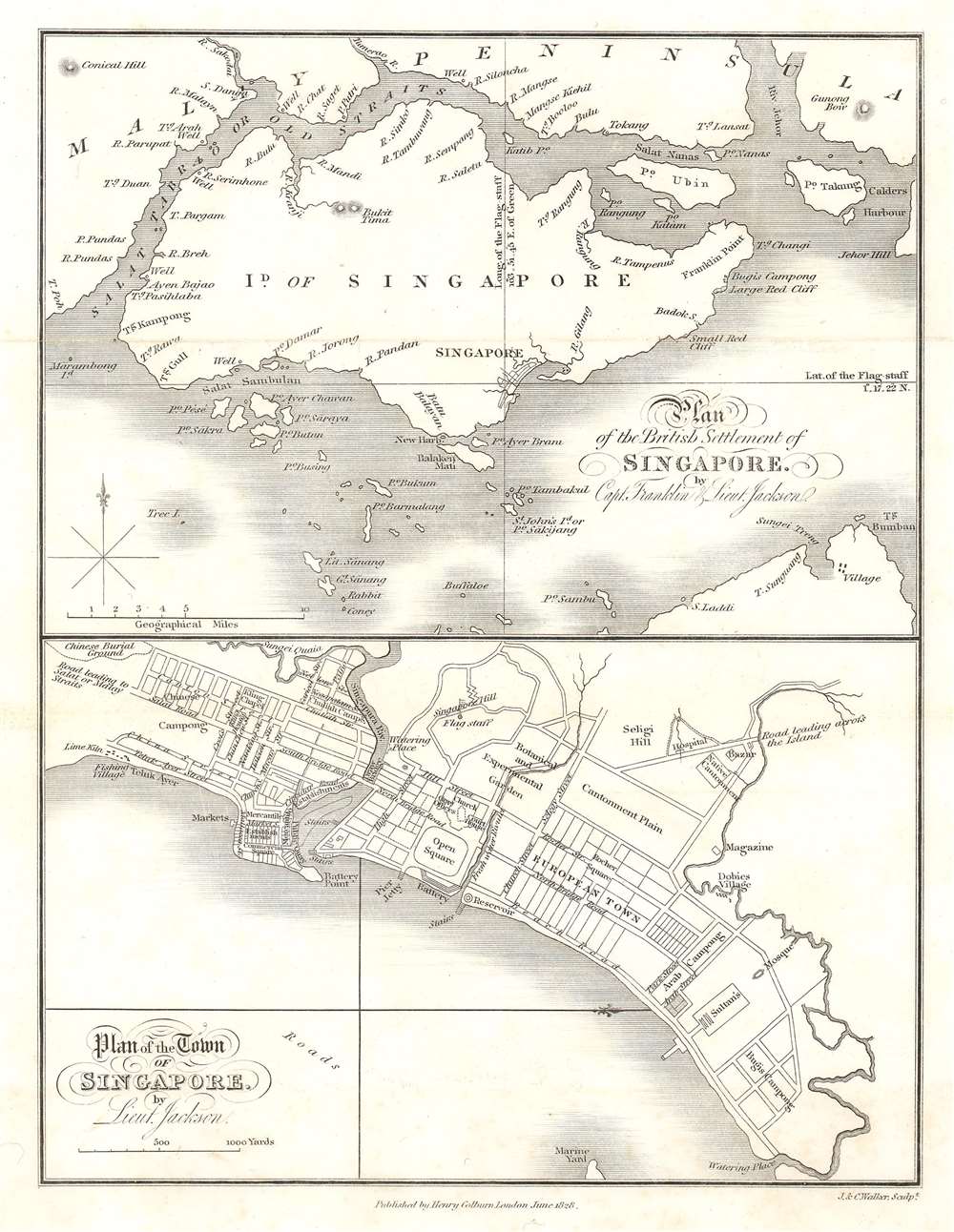 The first published map of Singapore!

Called the Jackson Plan or Raffles Plan, this is the first published map of Singapore. Published in 1828, the map was drawn by Lieutenant Philip Jackson at the request of Singapore founder Sir Stamford Raffles. The map is divided into two sections, a map of the island of Singapore, and a close up of the town of Singapore. The city plan presents an idealized version of Singapore following the Raffles vision and, while not fully implemented, was influential in the early development of the colony.

Stamford Raffles founded Singapore as a British colony in 1819 and promptly returned to England, leaving William Farquhar to manage the colony. From the beginning, Singapore witnessed rapid growth and a high volume as a port. With limited funds, Farquhar could not fully control the urban development of Singapore town and allowed for haphazard organic growth. When Raffles returned in October of 1822, he was displeased by the chaotic development of the city and commissioned Lieutenant Philip Jackson, who himself had just arrived in Singapore, to create a new development plan outlining his ambitious urban vision.

Raffles' plan for Singapore called for structured centrally planned development with racial and social segregation. He created a Town Committee to layout Singapore along six points:Jackson incorporated all of Raffles' suggestions on this map. Although not exactly considered a master plan for the development of Singapore, Jackson's map had a strong influence on subsequent settlement and development of the colonial town.

The map was drawn in late 1822 or early 1823, but was not printed until John Crawfurd included it in the 1828 publication of his Journal of an Embassy from the Governor-General of India to the courts of Siam and Cochin-China: exhibiting a view of the actual state of those kingdoms. The plan was engraved in London by the firm of J. and C. Walker and was published by Henry Colburn. The map was included in all editions of Crawfurd's work, but is rarely found separately and is scarce to the market. The OCLC cites 3 separate examples at the British Library, the National Library Board of Singapore, and the BNF.

Philip Jackson (September 24, 1802 - 1879) was a British naval officer, surveyor, and engineer active in the early settlement and planning of Singapore. Jackson was born in Durham and joined the East India Company army at 16. He traveled to India with the Bengal Artillery Regiment and was subsequently posted to Singapore in January of 1822. Leveraging Jacksons experience as a surveyor and engineer, Singapore founder Stamford Raffles appointed him Assistant Engineer on October 29 of 1922. Jackson was tasked with realizing Raffles vision for the design and layout of Singapore and is credited with the first map of Singapore, published in 1828. Jackson was appointed surveyor of Singapore's public lands in February of 1826. Learn More...