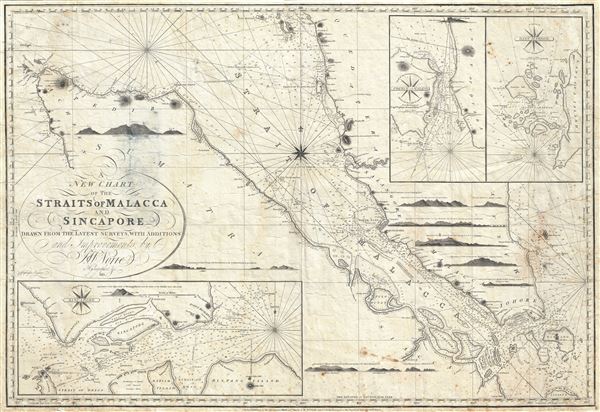 An extremely scarce 1815 map of the Strait of Malacca and Singapore (Sincapore) by John William Norie. This map covers from Aceh in northwestern Sumatra (Acheen) to Singapore Island and Pulu Bintang. This map first appeared in 1803 when it was issued by William Heather. Only one known example of the Heather edition exists and this is held in the archives of the British Library. The present example was issued and updated by Heather's heir John William Noire. Norie published at least two editions, the present example, 1815, and another example dated 1831. Since Noire took over Heather's business in 1812, it is a safe assumption that this is the first Norie edition of this map. It is the only known example.

Very good. Some verso repairs. Slight discoloration near title. Edge wear.
Looking for a high-resolution scan of this?