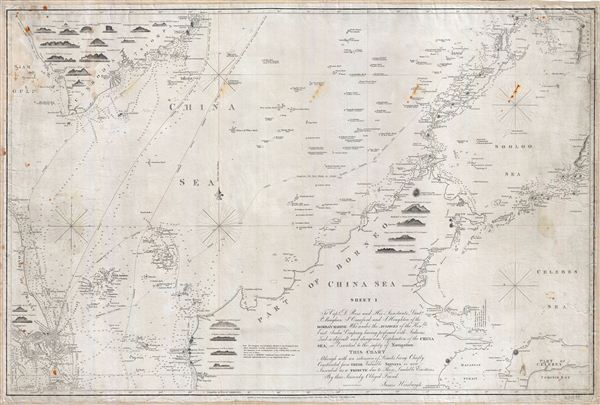 China Sea Sheet 1. To Capt. D. Ross and His Assistants Lieut. P. Maugham, J. Crawford, and J. Houghton, of the Bombay Marine; Who under the auspices of the Honble East India Company, having performed with Arduous Zeal a difficult and dangerous Exploration of the China Sea, so Essential to the safety of Navigation, This Chart Although with an extension of Limits being Chiefly Construction from Their Valuable Surveys, is now Inscribed as a Tribute due to Those Laudable Exertions By their Sincerely Obliged Friend, James Horsburgh.
1842 (dated)     27 x 39.75 in (68.58 x 100.965 cm)

An extremely scarce 1842 James Horsburgh nautical chart of parts of the east Indies and Southeast Asia, including Singapore, Malay, Borneo and Cambodia. Centered on northern Borneo, this chart covers from Malay and Singapore to the Celebes and from the Gulf of Siam to the eastern top of Sumatra. There are numerous coastal profile views within Cambodia, Malay, and Borneo. The map features countless depth soundings in fathoms as well as a number of unfathomable sailing instructions, such as 'Best Route to China for Leaky Crazy Ships,' as well as more practical routes for various seasons. This map identifies both the island and city of Singapore. This chart was originally published by Horsburgh in 1821 though the present example bears updates to 1842. All Horsburgh charts are extremely scarce and this is among the rarest and most valuable of the group.

Very good. Some minor discolorations in the upper left quadrant. There are also a few minor pencil markings associated with navigational use - can be removed but we felt they added character. Silk edging.
Looking for a high-resolution scan of this?