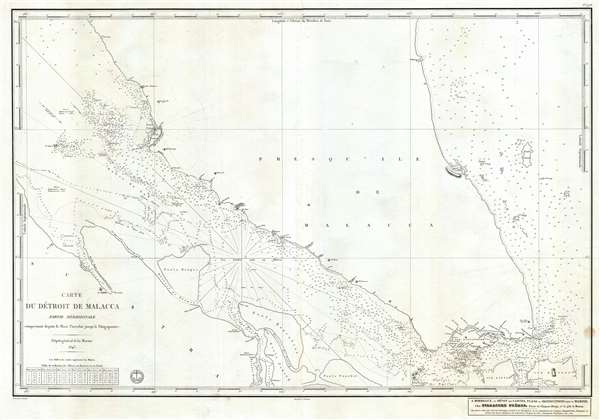 A rare French Dépôt Général de la Marine nautical chart or maritime map of Singapore and the southern part of the Strait of Malacca. The map covers from the Malay Peninsula roughly near Kuala Lumpur south to the islands of Bantan and Bintan, just south of Singapore. It extends west to Sumatra and east to Bintan (Bintang). The map offers a wealth of superb detail throughout, particularly in the vicinity of Singapore and along the treacherous western coast of the Malay peninsula. In the lower right corner a pastedown advertises the reseller, Fillasture Freres, a nautical supply firm based in Bordeaux. This map was engraved by Jacobs in Paris on behalf of the Dépôt Général de la Marine. Cartographically this chart is most likely based upon the work of Horsburgh and the British Admiralty. The chart appears to be quite rare with the OCLC identifying no intuitional examples.