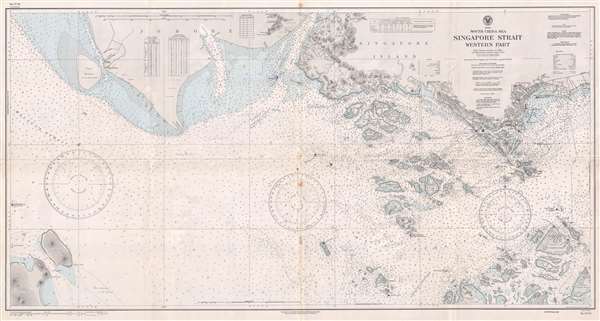 A U.S. Navy chart dating from two months before the end of World War II in the Pacific.

This is a 1945 U.S. Navy Hydrographic Office nautical chart or maritime map of the Singapore Strait. The map depicts the region from the Malacca Strait to the city of Singapore and from Johore and Singapore Island to Great Karimon Island and several smaller islands south of Singapore. A detailed city plan of the city of Singapore is included, with numerous locations labeled within the city, including the aerodrome, the clock tower, and Fort Canning. Myriad depth soundings, measured in fathoms, are present throughout. Topographical features are illustrated on Singapore Island, along with several rivers and other physical features. Numerous regional islands are illustrated and labeled. Tables containing tidal information, the direction and rate of tidal currents, and conversions from fathoms to meters are situated along the top border.

Created from British and Dutch surveys and charts, this chart was originally published by the U.S. Navy Hydrographic Office in May 1935. This example bears numerous small updates and corrections, made almost exclusively after the beginning of World War II. The last update dates from July 1945, two months before the end of World War II in the Pacific. At that time the Japanese still occupied Singapore and would until the end of the war in September.