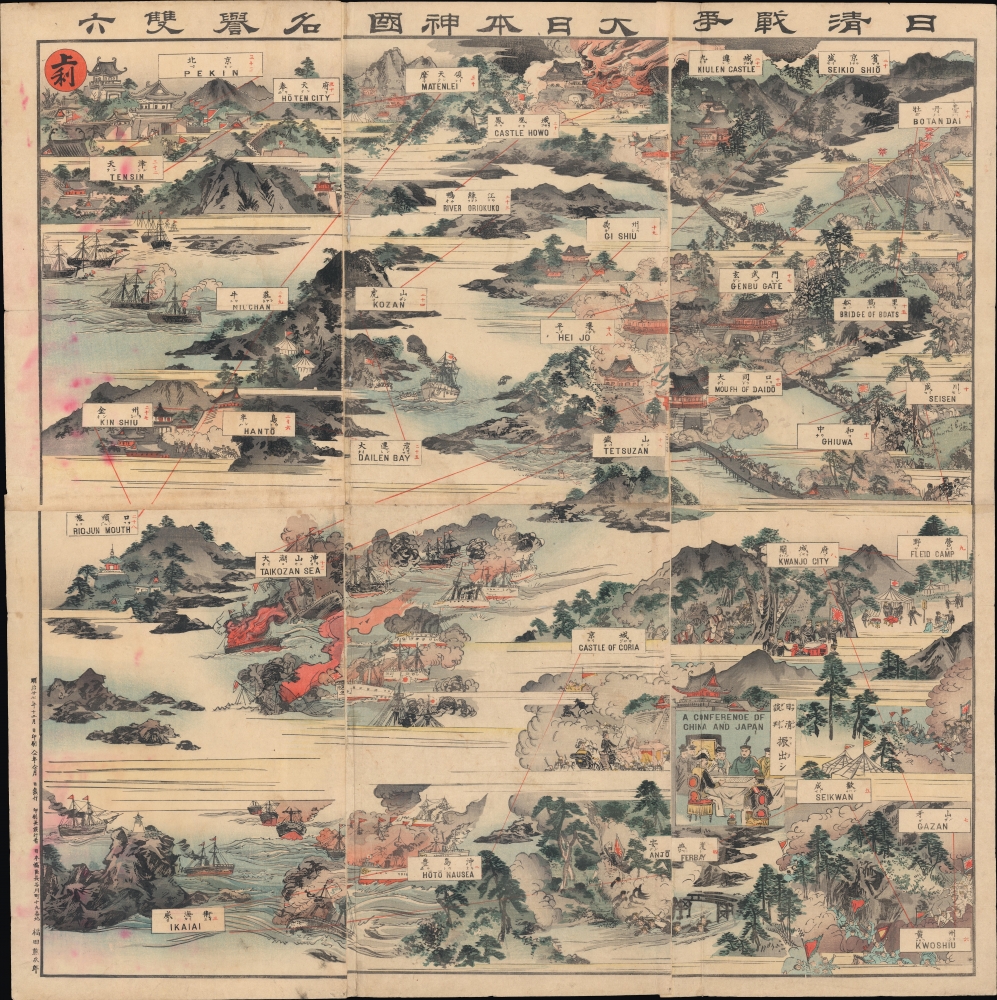 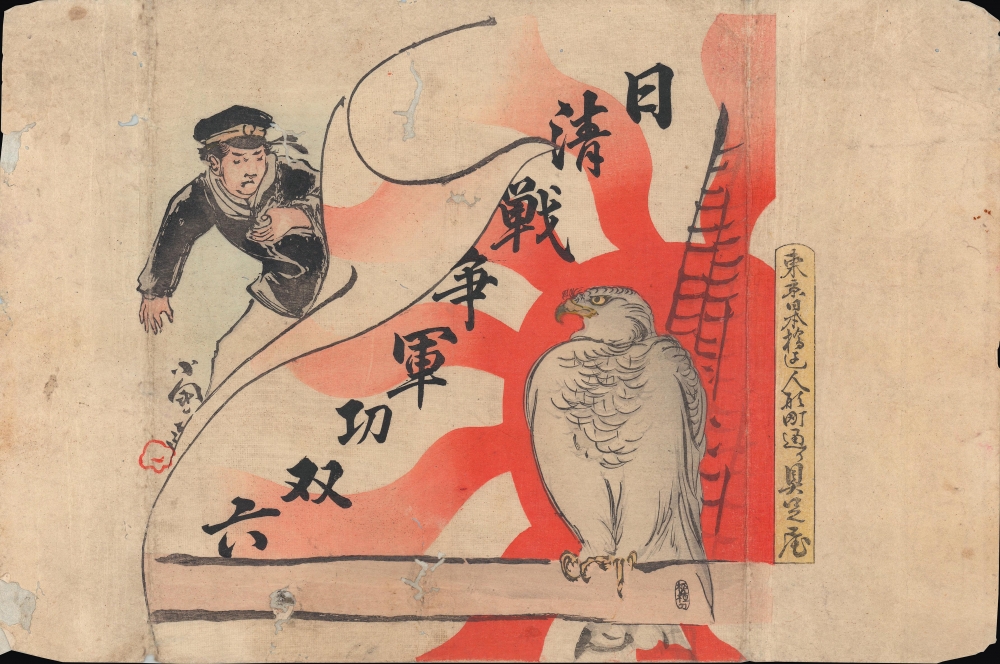 A fascinating relic of Japanese popular culture during the First Sino-Japanese War, this is an 1894 sugoroku game produced by Fukuda Kumajirō. Illustrating a birds-eye view of the Korean Peninsula and northeastern China, it paints a background of naval and land battle scenes for players to progress across to reach the finish-line (agari) at Beijing (Pekin).

This view is oriented towards the west-northwest, with the central and northern portion of the Korean Peninsula in the foreground, the Yellow Sea at center, and Beijing and Manchuria in the background. The perspective of the map is also interesting in that it distorts the distance between locations for the sake of fitting them all on the game board. For instance, the strategic port and naval base of Weihaiwei at one tip of the Shandong Peninsula, located to the left in the foreground, is much farther from the Korean Peninsula than suggested here.

Some of the sites highlighted are recognizable such as Pyongyang (平壤 'Heijo') and Seoul (京城, 'Castle of Coria'). Other locations are less well-known, but were the site of important battles. Interestingly, both Japanese kana and English transliterations appear, perhaps a reflection of growing Japanese interest in English.

This view was published in December (the exact date is unspecified), by which time Japan had already destroyed the Beiyang Navy in the Yellow Sea, invaded Manchuria, and captured Port Arthur near Dalian Bay (here as 'Dailen'). By February, Japan captured Weihaiwei, then in March Yingkou, and began preparing an occupation of Taiwan by seizing the Penghu Islands. The Treaty of Shimonoseki ending the conflict was signed in April 1895, resulting from long deliberations, which are alluded to in the illustration 'Conferenoe [sic] of China and Japan.'

The map is intended for sugoroku, more specifically e-sugoroku (繪双六). Historically there are two variants of sugoroku, one that is similar to backgammon, and the presently offered 'snakes and ladders' variant. This version of the game appeared as early as the 13th century, and was popularized by the rise of printing technology, especially in the Edo and Meiji periods, leading to the production of high-quality visually-arresting gameboards. A standard sugoroku board has a starting point, the furi-dashi, and a winding or spiral path terminating at the agari (here as 上利) or finish-line. The gameplay itself, not unlike 'snakes and ladders,' is a race to the finish. Many sugoroku had an educational or didactic purpose and were geared towards inculcating patriotism and good morals in children, especially in the Meiji period.

Tokugawa Japan and Qing China faced similar problems in the mid-19th century: overpopulation, domestic unrest, ineffective governance, weak leaders, and finally, foreign threats from Western powers. Both countries were on the receiving end of 'gunboat diplomacy,' which forced them to open ports for foreign trade, allow foreigners to reside there, and tolerate a degree of foreign cultural influence, such as Christian missionaries. The combination of pent-up discontent and sudden shock from outside the system caused both countries to undergo a period of upheaval and crisis.

Their fortunes diverged, however, in that the Qing managed to hold on to power (just barely) while the Tokugawa fell and were replaced by a new regime led by the Meiji Emperor. The new government came to power promising to expel foreign influences, but then turned around to embrace them, recognizing that Japan's best hope for survival was to imitate the Western imperial powers (a realization the Tokugawa had also come to, albeit too late to save themselves).

From the Meiji Restoration in 1868 onwards, drastic changes were implemented, often against public opposition, to the extent that this agenda has been dubbed a 'revolution from above.' Within a few years, Japan was already eyeing the Ryukyu Islands and looking to expand influence in Korea. The latter goal was greatly aided by the 1876 Treaty of Ganghwa, Japan's own 'unequal treaty' imposed on Korea.

These moves were anathema to the traditional order in East Asia, where China was clearly on top and other countries were secondary powers. Joseon Korea was effectively a protectorate of China, so increasing Japanese influence there was highly disturbing to the Qing rulers of China, and they dispatched capable officials like Yuan Shikai (1859 - 1916) to oversee the situation. From the late 1870s through the mid-1890s, a complex game of influence played out at the Korean Court, with different factions aligning with Japan, China, or other outside powers, especially Russia. By the 1890s, Japan was clearly in the ascendant while the Qing was beset by problems and could not afford another war.

The ultimate catalyst for a war over Korea came with the Donghak Peasant Uprising that began in January 1894 and gained rapid momentum (one of their main grievances was growing Japanese influence in Korea). In reaction, nominally to protect Japanese citizens and property, Japanese troops were dispatched to Korea in violation of China's protectorate over the peninsula. As a result, the two countries went to war.

The Qing had attempted to modernize their military in the late 19th century, but the resulting 'Self-Strengthening Movement' was only a partial success. Its limitations were on clear display as Japan's thoroughly modernized military sprang from one victory to another on land and sea. The Qing had no choice but to sign a humiliating treaty, surrendering Taiwan and their influence in Korea to Japan. Japan's victory was shocking to many in the West and signaled its rise as a proper regional if not a world power. At home, it led to a surge of popular nationalism that would carry Japan to further wars and expansionism in East Asia. In China, the war resulted in calls for more drastic reform, which were stymied, and spelled even greater troubles for the Qing Dynasty, which would collapse within twenty years of the war.

This map was printed and published in December 1894 (Meiji 27) by Fukuda Kumajirō (福田熊次郎). It is not included in the known holdings of any institution and is very scarce to the market.

Fukuda Kumajirō (福田熊次郎; ? - 1898), also known as Gusokuya (具足屋) was a publisher of woodblock prints, especially ukiyo-e, in Tokyo during the Meiji period. He inherited the business from his father Fukuda (Gusokuya) Kahei (具足屋嘉兵衛), who himself was the son of late Edo period woodblock artist Utagawa Kuniharu (歌川国春), born with the surname Fukuda but like other disciples of Utagawa Toyoharu (the Utagawa School) adopted the surname of the innovative artist (Kuniharu also developed his own pen name, Gusokuya, adopted by his son and grandson). Through the 19th century, the family firm published many of the leading woodblock artists of the day, including other members of the Utagawa School. After Kumajirō, the business passed to an adopted son named Hatsujiro (福田初次郎), but appears to have stopped publishing in the early 20th century, around the time of the Russo-Japanese War. Learn More...

Good. Wear and some loss along fold lines. Offsetting at left. Accompanied by original cover.
Looking for a high-resolution scan of this?