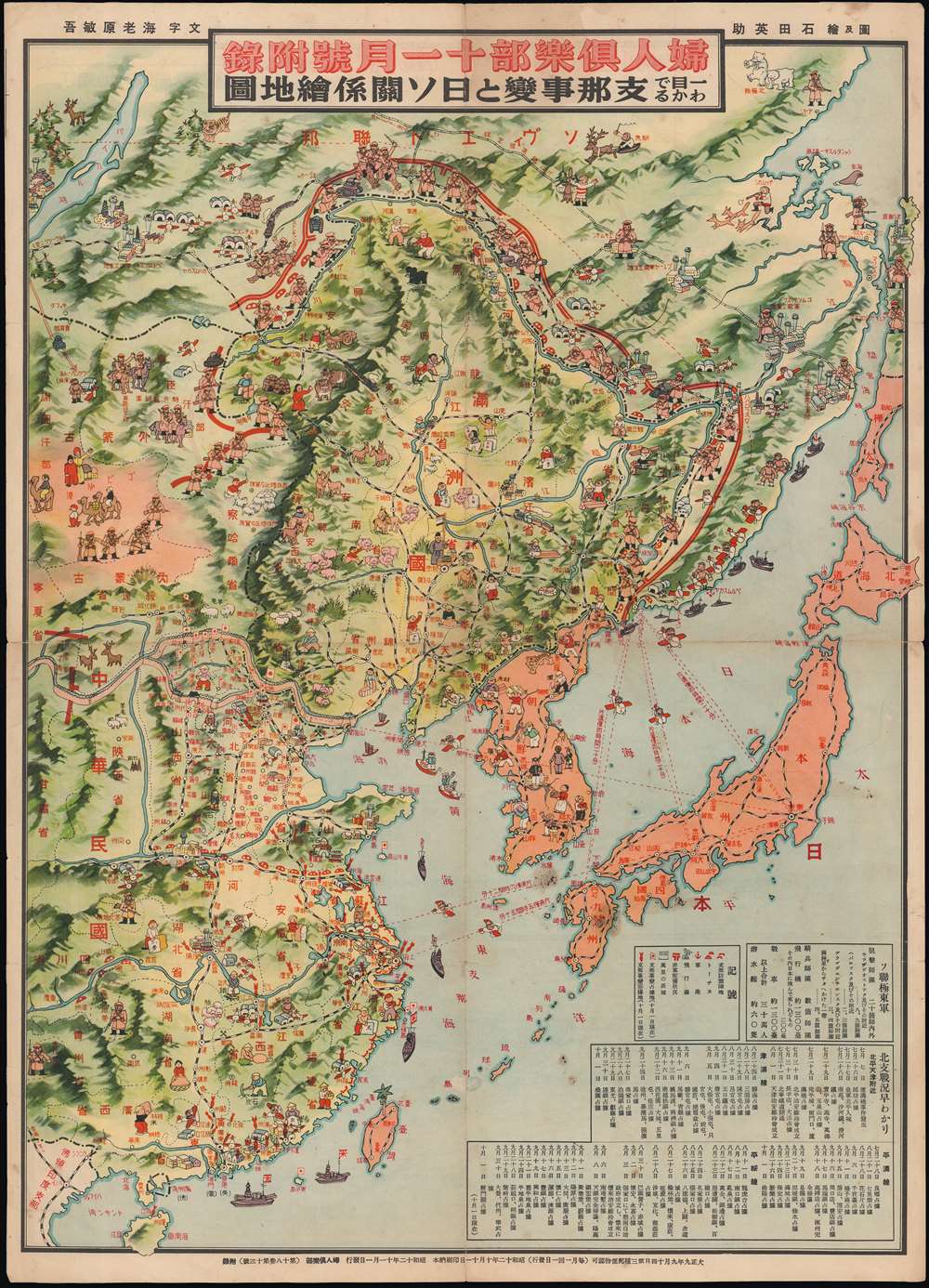 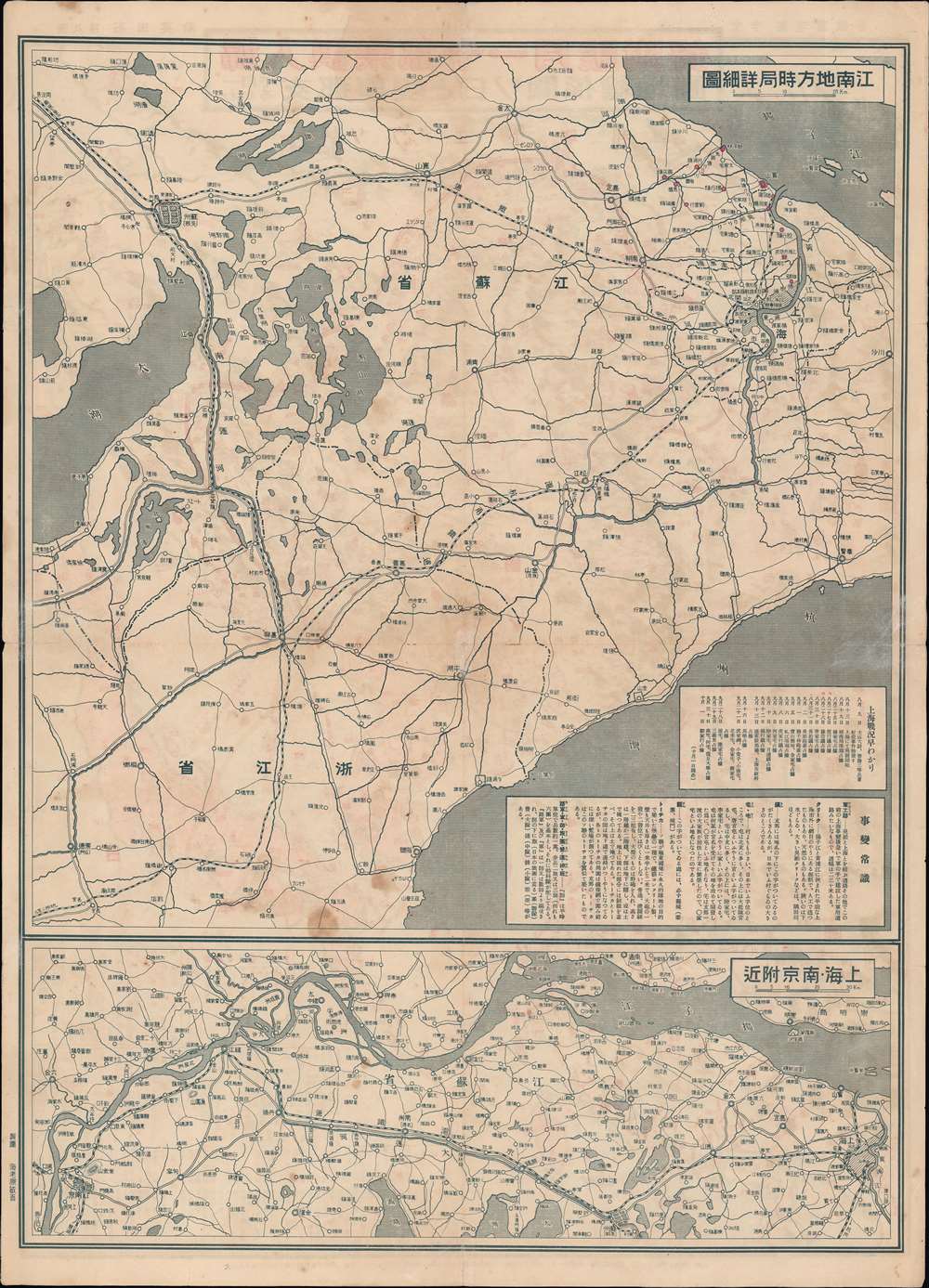 The Sino-Japanese War situation in 1937 in cartoonish detail. Issued for Japanese women – suggestive of the social changes to traditional gender roles brought about by the war.
$850.00

This is a colorful, richly illustrated November 1, 1937 (Showa 12) Ishida Eisuke propaganda manga map of China, Korea, Manchuria, and Japan in the early months of the Second Sino-Japanese War (1937 - 1945). Despite the cartoonish figures, the topic was deadly serious and Ishida was able to include or allude to a great deal of information on military affairs and geopolitics while also conveying the Japanese, or at least the Japanese government's, views on the war.

The map indicates major rail and air routes in East Asia and the resources provided by different areas, along with the location of Chinese fortifications, ‘red areas' (赤軍配備狀況, the red T shapes), Japanese-occupied areas, and areas under Japanese arial bombardment. As was common with Japanese wartime propaganda, Chinese civilians appear to eagerly welcome Japan's invasion, as do Mongols, including one soldier of the Mongolian People's Republic. The largest inset at bottom gives a day-to-day chronicle of the progression of the war in China on several fronts. The verso contains maps of the situation in Jiangnan (the Lower Yangzi region) and in Shanghai, with insets explaining recent developments as well as political and military terminology.

This map was issued as an appendix for the November 1937 issue of Women's Club (婦人倶樂部), a fashion and home life magazine that focused on children's fashion, cooking, and interior design. As militarism in Japan and the conflict in China intensified, there was a backlash against the 'modern girl' trend of the 1920s, and the ideology of 'good wife, wise mother' (良妻賢母) predominated. But this map hints at the dramatic changes in gender roles that the war would bring about. Much as in the West, the war effort pulled Japanese women out of the home and into offices and factories. These trends continued after Japan's surrender and occupation in 1945, aided by the elimination of wartime social controls and weakening of nationalist-patriarchal ideology.

Although anime and manga are usually associated with postwar Japanese popular culture, these forms of cultural production have a deeper history and manga was already the object of popular consumption when the war in China began. As in the United States and other countries, comics and animation were utilized as a form of propaganda during the war. In Japan, two films (Momotarō's Sea Eagles, 1942 and Momotarō: Sacred Sailors, 1945) using the popular Momotarō character and other figures from Japanese folklore were important not only for their propaganda effect, but also because they were the earliest animated films in Japanese history and among the earliest in Asia. Outside of animation, popular magazines like Women's Club and Boys' Club(少年倶樂部) were enlisted in promoting militarist nationalism, as when the former publication appeared to celebrate the killing of Chinese prisoners of war in Nanjing.

Starting with the Japanese invasion of Manchuria (the 'Mukden Incident') in September 1931, Chinese and Japanese troops fought on-again, off-again battles in northern China for several years. One of these many skirmishes took place on July 7, 1937, at the 'Marco Polo Bridge' (Lugouwiao; 盧溝橋), just to the southwest of Beijing. Chiang Kai-Shek was reluctant to throw his armies into a full-scale war against the better trained and equipped Japanese forces but was forced to bow to public pressure and launch the long-expected war. Chiang decided to throw the bulk of his forces into a battle for Shanghai, which was raging when this map was distributed. This effort proved unsuccessful after several months of bitter fighting. Severely weakened by the fighting in Shanghai and with many units in disarray, Chiang planned a retreat to Chongqing (重慶), deep in the Chinese interior, and prepared for a long-term war of attrition. From 1937 onwards, the Japanese referred to the fighting in China as the China Incident (支那事件), since war had not been declared, whereas the Chinese referred to the conflict as the 'War of Resistance against Japanese Aggression' (抗日戰爭) or simply 'War of Resistance' (抗戰). In any event, it was a bitter and violent conflict that has defined both countries' subsequent histories.

The Role of the Soviet Union

Although produced in the first phase of the Second Sino-Japanese War as a critical battle for Shanghai was being waged, this map emphasizes the perceived threat of the Soviet Union to Japan's empire, particularly in Manchuria (Manchukuo), which is ringed by Soviet troops pointing guns towards the territory. An inset at right lists the Soviet units stationed in the Russian Far East and their approximate strength.

The complex relationship between Japan and Russia had been combative dating back to the late nineteenth century, when they tussled for influence in Korea and Manchuria. Japan's Siberian intervention in the Russian Civil War (1917 - 1922) made the new Soviet Union even more suspicious towards Japan, which only worsened with territorial disputes over Sakhalin and the Kuril Islands, Japan's invasion of Manchuria in 1931, and the establishment of puppet regimes in Manchuria, Inner Mongolia, and northern China during the 1930s.

As Japan drifted towards militarist nationalism in the 1930s, anti-Communism became a guiding principle in foreign relations, and Japan sided with Nazi Germany in the 1936 Anti-Comintern Pact and the 1940 Tripartite Pact. Moreover, Japan justified its actions in China in terms of anti-Communism. Although Chiang Kai-Shek had spent much of the 1930s trying to eliminate the Chinese Communist Party, Japanese propaganda was able to play up his difficulties doing so as a sign that Communism would inevitably sweep China without outside intervention. Soviet plots were seen everywhere, especially after Chiang was forced to sign an agreement with the Communists at Xi'an in December 1936. The signing of a Sino-Soviet Non-Aggression Pact and Soviet aid to Chiang soon after the Marco Polo Bridge Incident in July 1937 lent further credence to these views.

This map was made by Ishida Eisuke and Ebihara Satoshi, and distributed on November 1, 1937 as an addendum to the November issue of the publication Women's Club (婦人倶樂部). Ishida handled the map and illustrations while Ebihara wrote the text and made the two verso maps. It is held by the International Research Center for Japanese Studies (Nichibunken), the National Museum of Taiwan History, and the Chinese University of Hong Kong. It is scarce on the market.

﻿Ishida Eisuke (石田英助; 1914 - 2010) was a Japanese artist who made several maps during the Second Sino-Japanese War, but is best known for his drawings in the publication Boys' Club (少年倶樂部) during the war and publishing manga in a variety of formats in the postwar period (late 1940s – 1960s). Learn More...


﻿Ebihara Satoshi (海老原敏吾; fl. c. 1936 - 1938) was a Japanese cartographer who was involved with the production of a map of status of the Second Sino-Japanese War for the Japanese publication Women's Club in 1937. Learn More...