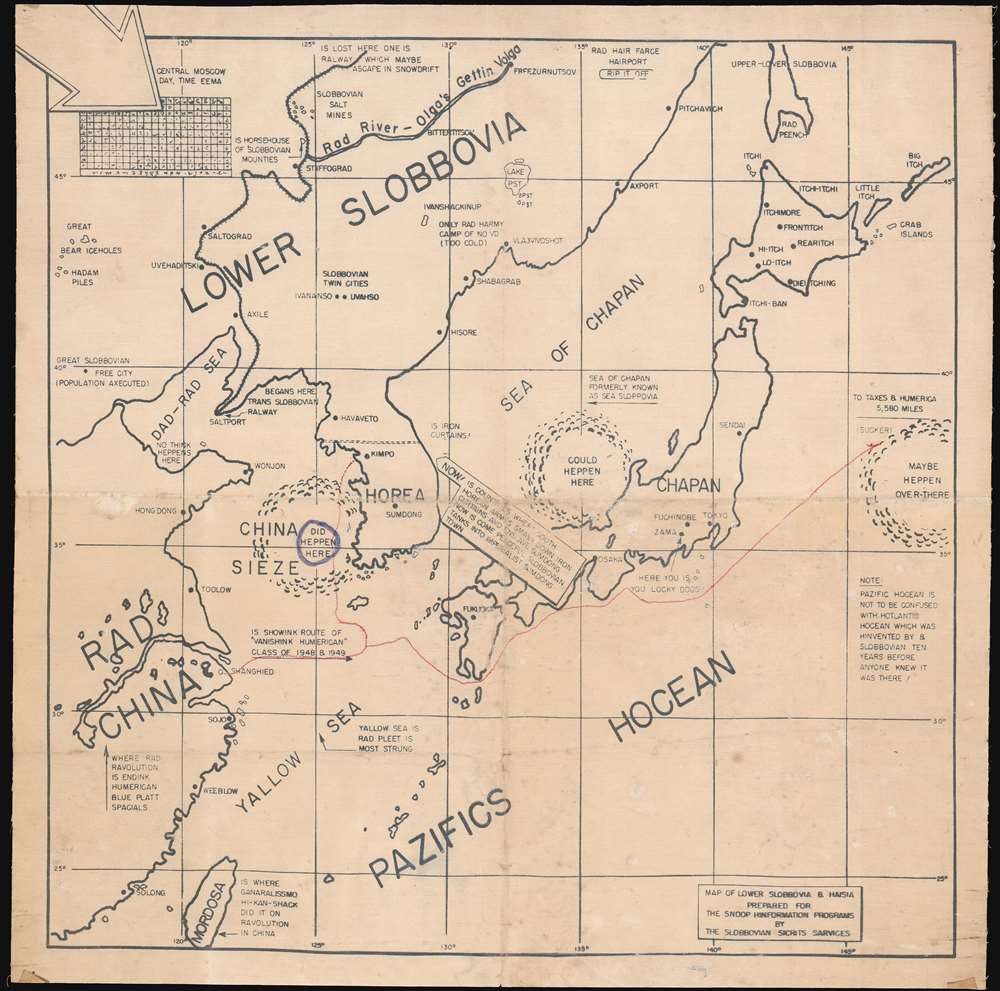 Capp inspired satirical look at East Asian situation at the outbreak of the Korean War.
$2,500.00

The only known example of a c. 1950 Al Capp inspired map of Korea, China, and Japan, satirizing the Communist Revolution in China and the outbreak of the Korean War. The map illustrates much of east Asia, including all of Japan and Korea, as well as Manchuria, Taiwan, and the eastern parts of communist 'Rad' China. Although it is unclear if Capp himself had anything to do with this map, it certainly employs Capp's satirical kingdom of misfortunates, Lower Slobbovia, to illustrate the degenerating political situation following the Communist Revolution (1949) and more specifically the North Korean invasion of South Korea (1950).

The maps uses Capp's satirical 'Slobbovian' language to illustrate the East Asian political situation c. 1950. An arrow points to Korea - the focus of the map, then enmeshed in the complicated back-and-forth Korean War, with powerful allies supporting both sides (China and Russia supported North Korea, and the United Nations supported South Korea). In the Yellow Sea a hot spot is identified as 'Did Heppen Here', referring to Communist expansion. Another similar zone appears in the East Sea (Sea of Chapan), suggesting that Japan too might fall to the Red Wave. Similarly, another zone, in the Pacific, labored 'Maybe Heppen Ove r-There', underscoring boundless ambition of the Communist leaders. Red trails leading from Seoul and Shanghai trace the retreating of Americans across the Pacific. In Taiwan (Mordosa) the presence of 'Ganaralissimo Hi-Kan-Shack' (Chiang Kai-shek) and his anti-Communist KMT revolutionaries are noted.

'Slobbovia' was first introduced four years earlier, on April 4, 1946 by Li'l Abner comic artist Al Capp. The term in general is thought to have been inspired by Russian Siberia, particularly the Jewish Autonomous Oblast of Birobidzhan, which would appear on this map roughly where the large arrow points to an inexplicable table. Slobbovia is traditionally divided into Upper and Lower Slobbovia, but in most cases the focus is on Lower Slobbovia. In Li'l Abner, the unfortunate residents of Lower Slobbovia were perpetually waist-deep in snow, plagued by polar bears, with icicles hanging from every nose. Lower Slobbovians spoke with burlesque pidgin-Russian that abounded in incongruous Yiddish humor. Capp's caricatures of ruthless and corrupt business and political interests were often pitted against those of the pathetic Lower Slobbovians in a classic haves versus have-nots plot lines. Since that time, 'Lower Slobbovia' entered common parlance to refer to an underdeveloped, socially backward, remote, and impoverished nation-state.

With the support of Communist allies in China and Russia, North Korea invaded South Korea on June 25, 1950. The United Nations, particularly the United States, immediately denounced the action and sent forces to assist South Korea. Nonetheless, within the first two months of the conflict, North Korean forces pushed south, seizing control over most of the peninsula. A series of counter-offenses nonetheless reversed the war, and pushed the North Koreans north. Things changed again when China sent in troops. Control of the Korean peninsula continued to seesaw throughout the war, with Seoul captured and liberated four times. Ultimately, on July 27, 1953, the Korean Armistice Agreement was signed, creating the Korean Demilitarized Zone (DMZ). Technically, the two Koreas are still at war, as no peace treaty was ever signed.

The author of this piece is unknown. Stylistically, it bears some semblance to other maps of Slobbovia drawn by Al Capp, particularly in the toponymy and typography, but it is unclear whether or not Capp was involved with this piece. The map may never have been published and appears here as the only known surviving example. A once in a lifetime collecting opportunity.