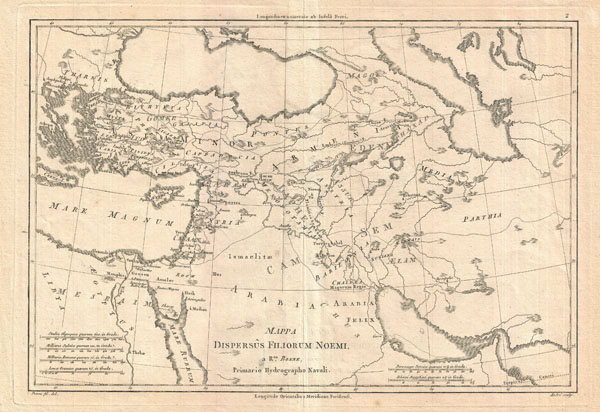 This is a 1787 Rigobert Bonne map of the Dispersal Sons of Noah. The map covers the area between Arabia, the Black Sea and Caspian Sea. Focuses on the territory occupied by modern day Libya, Eygpt, Arabia, Turkey, Iraq and Iran. Shows the dispersal, following the Biblical Flood, of the three sons Shem, Ham and Japeth, and their descendents: Elam, Ashur, Aram, Arpachshad (Arphaxad) and Lud from Shem; Cush, Mizraim (Mesraim), Phut, and Canaan from the Ham; and the sons of Japeth: Gomer, Magog, Madai (Media), Javan, Tubal, Meshech and Tiras. Includes four scales in the bottom left quadrant and two scales in the lower right quadrant. Minor topographical detail shown in profile.