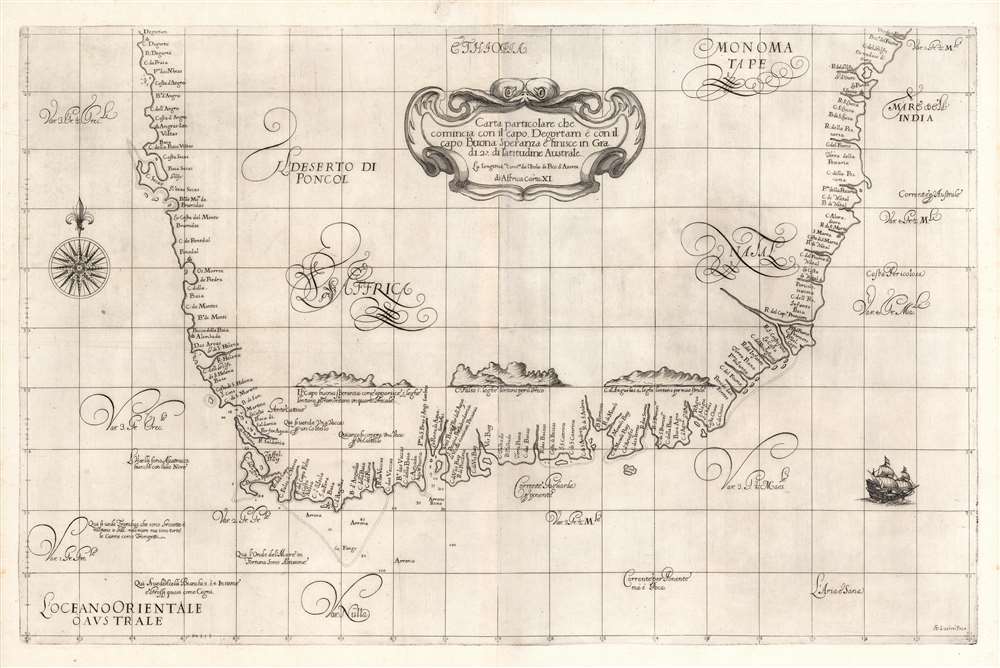 This is a superb example of Robert Dudley's 1647 coastal chart of South Africa. It was included in Dudley's Arcano del Mare, hailed by Tooley as

At least in principle, these navigational notes and the adherence to the Mercator projection would make Dudley's charts the first to be of any use at sea. The present chart exhibits all of these qualities.

The inclusion of coastal recognition views of the Cape of Good Hope, Cape Hangklip and Cape Agulhas on this particular chart suggests that Dudley, or his source for this chart, had benefited from actually having seen these shores. All of these views were landmarks of note for mariners rounding the Cape.

Dudley was fortunate in having at his disposal the master engraver Antonio Francesco Lucini, whose art is evident on all of the plates in the Arcano del Mare. Dudley's charts are prized for their superb, distinctive engraving and masterful calligraphy. This chart is also embellished with a fine compass rose, an elegant cartouche, and a neatly-engraved sailing ship.

This map was completed by Sir Robert Dudley in manuscript form c. 1636. It was engraved Lucini and printed in Florence in 1647. The present example is the first-state, first-edition. The Arcano del Mare is catalogued in about thirty institutional collections. The separate chart is catalogued only in the Stanford University Library.

Dudley, R., Dell'Arcano del Mare, (Florence) 1647.     Dell’Arcano del Mare (Secrets of the Sea) is a six volume 17th century maritime encyclopedia by English nobleman Sir Robert Dudley (1573 - 1649). It is considered to be one of the most important maritime atlases of all time, the first of its kind in print: the first sea atlas to treat the entire world (not just Europe), the first by an Englishman, the first to illustrate prevailing winds and currents, and the first to universally employ a Mercator projection. The charts themselves are notable for being all new works, created by Dudley based upon a lifetime of collecting maritime data. All of the roughly 130 known charts in the Dell’Arcano del Mare were engraved in the Italian baroque ethic by Antonio Francesco Lucini, a Florentine master engraver. It is said that the work took Lucini 12 years and consumed more than 5000lbs of copper. It was published in Florence between 1645 and 1646 in six folio volumes. Another edition was issued in 1661 but contained fewer charts.

Very good. Printed to two sheets and joined as issued. Few very unobtrusive spots, else a fine example with a superb, sharp strike.