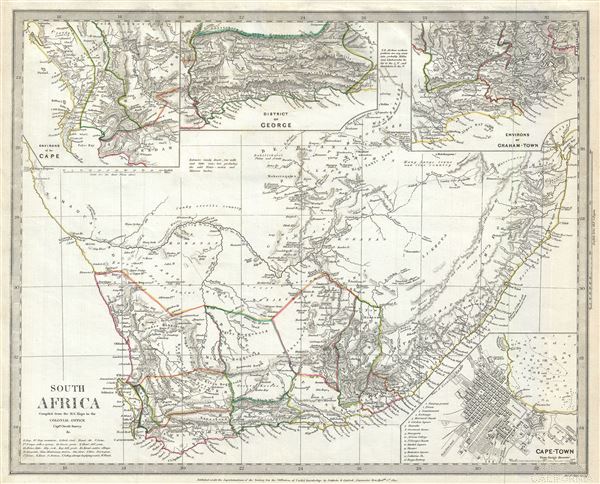 This is a scarce 1834 map of South Africa by the Society for the Diffusion of Useful Knowledge or S.D.U.K. It covers modern day South Africa from Delagoa Bay (modern day Maputo Bay) to Luderitz Bay, originally named Angra Pequena by Bartolomeu Dias, who discovered it in 1486. It includes the districts of Swellendam, Beaufort, Cape Town, Stellenbosch, Albany, Worchester and George. Further north the map notes the 'Countries inhabited by various tribes of the Hottentot race called Bosjemans or Bushmen and marks countless Bushmen tribes. The map includes numerous annotations throughout noting the vegetation and terrain. Four insets of the Environs of the Cape, the District of George, Environs of Graham-Town and a plan of Cape Town are included.

Southern Africa, a more pleasing climate to the Europeans, was at the time actively and aggressively being colonized by the English. Here, the region is divided into various provinces including the British Cape District and Swellendam, and the Dutch / Afrikaans Territories of Stellenbosch. Around the time this map was made the Boers or Voortrekkers were leaving Cape Colony by the thousands, making their way away from British control eastward and north-eastward. They would eventually create settlements in the many Boers Republics including the Transvaal and the Orange Free State.

This map was compiled by the M.S. Maps in the Colonial Office, Capt. Owen's survey etc. and was originally copyrighted in 1834, but was issued in Volume two of Chapman and Hall's 1844 edition of Maps of the Society for the Diffusion of Useful Knowledge. It was engraved by John Walker of J. and C. Walker.