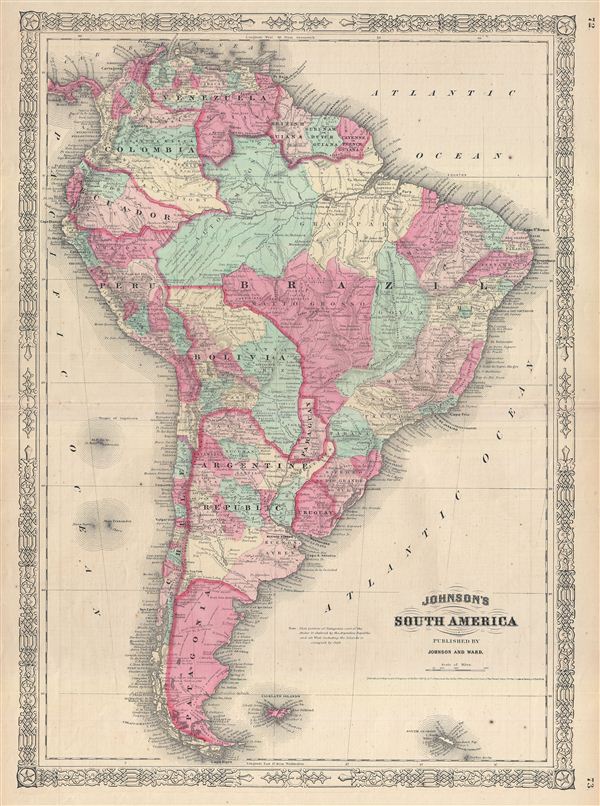 This is a beautiful example of Johnson and Ward's 1866 map of South America. It covers the entire continent from the Caribbean to Tierra del Fuego and from the Pacific to the Atlantic, including the Falkland and South Georgia island groups. Features the continent in considerable detail - especially the Amazon interior, which at the time was largely unknown. Various towns, cities, rivers and several other topographical features are noted with relief shown by hachures. It features the fretwork style border common to Johnson's atlas work from 1864 to 1869. Published by A. J. Johnson and Ward as plate nos. 72 and 73 in the 1866 edition of Johnson's New Illustrated Family Atlas. This is the first edition of the Johnson Atlas to be attributed to Johnson exclusively. Map is dated and copyrighted, 'Entered according to Act of Congress in the Year of 1863 by A. J. Johnson in the Clerk's Office of the District Court of the United States for the Southern District of New York.'

Johnson, A. J., Johnson's New Illustrated Family Atlas of The World with Physical Geography, and with Descriptions Geographical, Statistical, and Historic including The Latest Federal Census, A Geographical Index, and a Chronological History of the Civil War in America, (New York: Johnson and Ward) 1865. 404 Not Found