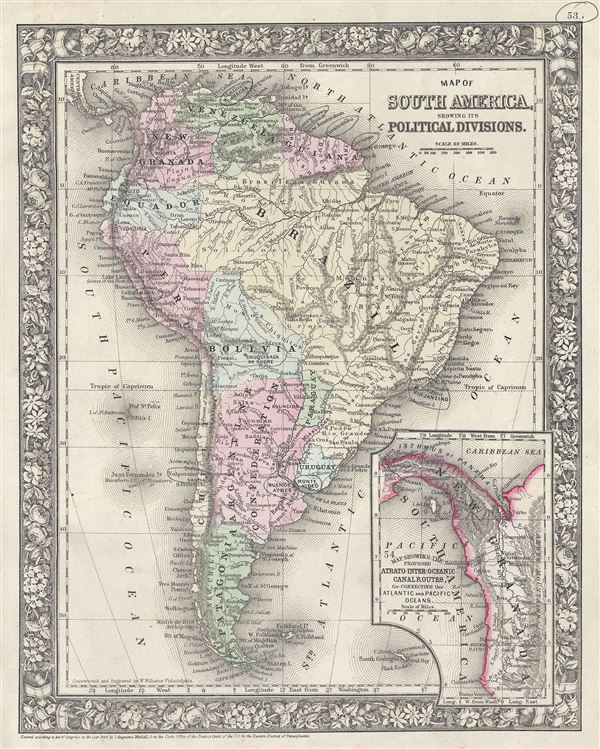 This is a fine example of the legendary American map publisher Samuel Augustus Mitchell Jr.'s 1866 map of South America. It depicts the whole continent from Panama to Cape Horn, it includes the Falkland and South Georgia island groups in considerable detail. Mitchell offers limited but surprisingly accurate detail of the interior of Brazil and the Amazon Basin. An inset map in the lower right quadrant depicts the Isthmus of Panama entitled 'Map Showing the Proposed Atrato-Inter-Oceanic Canal Routes, for Connecting the Atlantic and Pacific Oceans.' Work on the Panama Canal would begin in 1880 and be completed in 1914.

This map also identifies various cities, towns, rivers and an assortment of additional topographical details. Color coded according to political boundaries with elevation rendered by hachure. One of the more attractive American atlas maps of this region to appear in the mid-19th century. Prepared by S. A. Mitchell Jr. for inclusion as plate 53 in the 1866 issue of Mitchell's New General Atlas. Like many American map publishers of this period, Mitchell did not regularly update his copyright, consequently this map is dated and copyrighted to 1860: 'Entered according to Act of Congress in the Year 1860 by S. Augustus Mitchell Jr. in the Clerks Office of the District Court of the U.S. for the Eastern District of Pennsylvania.'

Very good. Minor spotting. Pencil marks over some cities, can be erased.