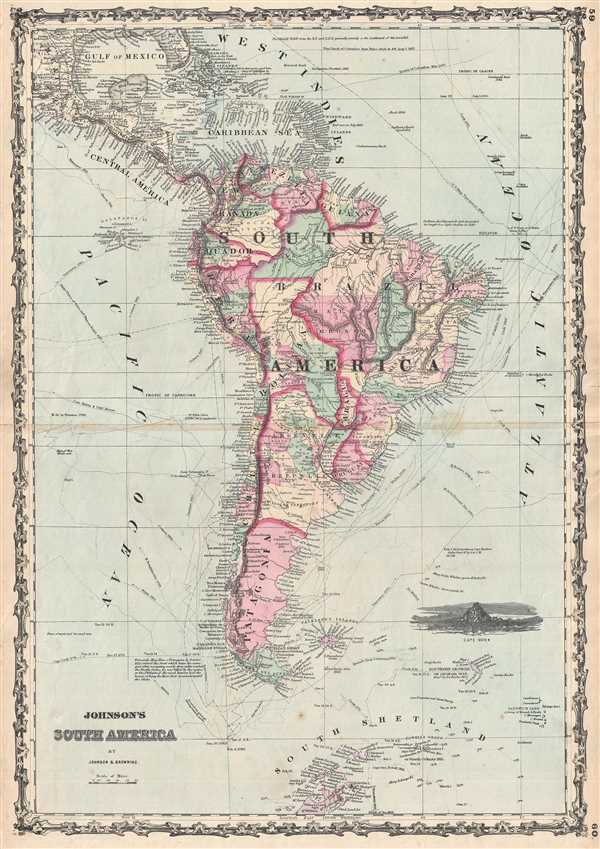 This is a magnificent 1861 hand colored map of South America. This map shows the region in incredible detail with notations of geographical and political features and other information such as telegraph cables, roads, and nautical facts. It also traces the routes of the important explorers, Byron, Wallis, Anson, Cook, Bouvet, Perouse, Bougainville, Colnett, Carteret, Halley, and Vancouver. This is a rare variant on the Johnson South America map that appeared only in the first three editions (1860, 1861 and 1862) of Johnson's Family Atlas. It differs from later editions both in style and form. In this edition the oceans are colored, there is a small decorative shore profile of Cape Horn, and the area covered extends as far north as Mexico and Florida.

Much of South America was, at this time, embroiled in or about to become embroiled in, severe civil strife. The new nations, freed from Spanish dominance though various wars of liberation in the previous decades, were struggling in their newfound independence to create stable governments. Most of these countries dissolved into civil war between 1858 and 1864.

This map features the strapwork style border common to Johnson’s atlas work from 1860 to 1863. Published by A. J. Johnson and Browning as plate numbers 59-60 in the 1861 edition of Johnson’s New Illustrated Family Atlas. This is the last edition of the Johnson Atlas to bear the 'Johnson and Browning' imprint. Subsequent editions reflect Ward's 1862 acquisition of Ross C. Browning's shares in the firm.