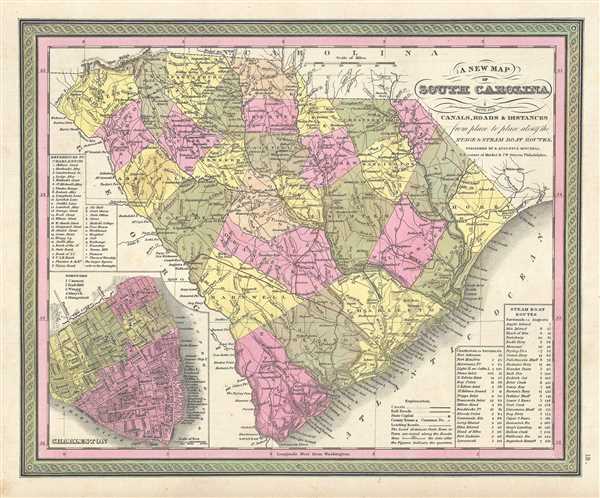 This is a beautiful example of Samuel Augustus Mitchell's important 1849 map of South Carolina. This map shows cities, topographical features, railways, ferries and roads with color coding at the county level. In addition to cartographic information this map is full of practical data for the traveler including notes on steam boat and ferry routes. The lower left quadrant bears a detailed inset of Charleston divided into its five boroughs: Cannon, Radcliffe, Wragg, Mazyck, and Hampstead. Important buildings, streets, wharves, and piers are also noted.

Cartographically this map is based on the earlier work of Tanner though it has been updated with new information as well as Mitchell's distinctive decorative border and color scheme. Mitchell published this chart in his atlas from 1846 to the late 1850s before discontinuing the series and selling his map plates to DeSilver. This map was issued in the 1849 edition of the New Universal Atlas. It was the last edition of that atlas to be published by Mitchell prior to selling the plates and rights to the atlas to Thomas Cowperthwait in 1850.