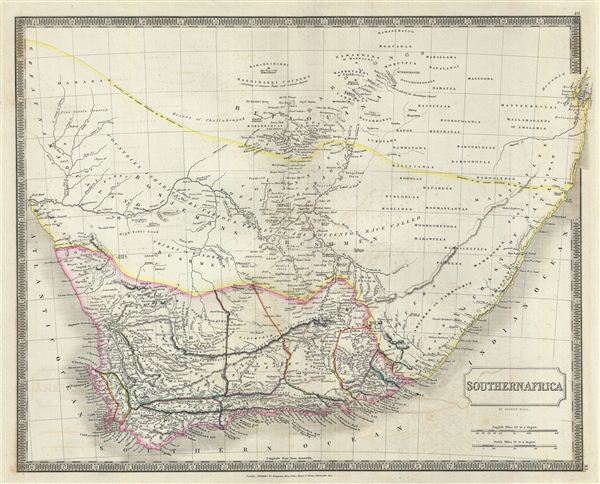 This is a beautiful map of southern Africa from Sidney Hall's extremely scarce 1835 New General Atlas. It covers modern day South Africa from Cape Voltas to Cape St. Lucia and includes the cities and towns of Tulbagh, Graaf Reynet, George, Somerset, Zwellendam, Albany, Beaufort, Cape Town, and Stellenbosch. Further north the map notes the 'Countries inhabited by various tribes of the Hottentot race called Bosjemans or Bushmen' and marks countless Bushmen tribes, some of which include the Mahawpees, Amtimbe or Tambookie, Boholas, Corannas, Koras or Koraquas, etc. It also marks the boundary of the country inhabited by the Hottentot race. North beyond this boundary, Hall notes the region of the Barolongs and the Betjoana. The Karrikarri country consisting of immense plains and extensive forests is also identified. Southern Africa, a more pleasing climate to the Europeans, was at the time actively and aggressively being colonized by both the Dutch and the English. Here, the region is divided into various provinces including the British Cape District and Zwellendam, and the Dutch / Afrikaans Territories of Stellenbosch and Graaf Reynet.