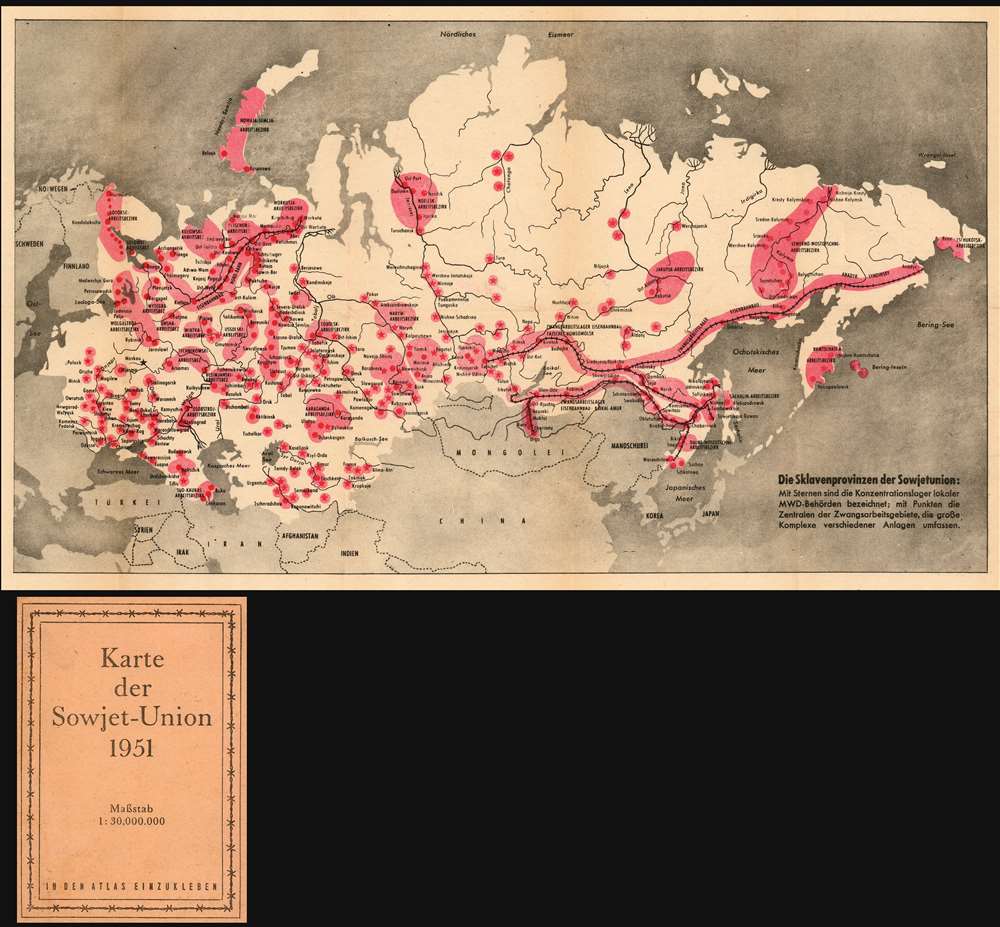 This is a rare Cold War artifact: a U.S. Information Service persuasive map published in Vienna showing what Russian writer and historian Aleksandr Solzhenitsyn would later call The Gulag Archipelago. This folding, two-color map shows the Soviet Union from the Baltic Sea to the Bering Strait, highlighting in red 'the location and extent of the Soviet Russian forced labor camps...' The German text on the inside cover explains, 'Taken together, these areas would make up a space the size of Western Europe.' Though the first 'corrective labor camps' were established as early as 1918, the full extent of the Gulag's massive prison and forced labor system - as displayed here on the map - was not realized until Stalin's rise to power. The map marks with stars the locations of concentration camps run by the MWD (Ministry of the Interior.) Broader forced labor regions are shaded a light red, with their headquarters locations marked with points. Several such 'forced labor areas' are shown to be linked together by railways, reflecting a high degree of organization and mechanization.

American Propaganda on the Frontier of the East Bloc

The U.S. Information Service - a propaganda organization established in 1934, but after 1948 an arm of the Central Intelligence Agency - distributed this map in Austria in order to influence the citizens of neutral Austria against the Soviets. As a neutral country geographically situated well into Eastern Europe, Austria was a vital ideological target for both the East and the West. Occupied by the Allies following the Second World War, Austria was able to escaped Germany's partition by its pledge to remain neutral in the Cold War. Official neutrality notwithstanding, the United States worked through its information services to present a clear picture of the authoritarian horror of the Soviet state. The paper cover of the folding map juxtaposes a studiously neutral title Karte Der Sowjet-Union 1951 with an alarming barbed-wire motif border. The text of the inside cover goes on to explain:blockquote 'the American Federation of Labor compiled the map based on fourteen thousand affidavits from former labor slaves. The number of prisoners is estimated at 14 million people. The average mortality rate in the camps is 12 percent per year.The text refers to a widely-reported effort to embarrass Soviet diplomats with the map:

The deputy Soviet foreign minister Andrej Gromyko does not want to know anything about this map. When it was to be handed over to him at the Japanese Peace Conference in San Francisco, a Soviet representative sitting next to Gromyko seized the map and threw it to the ground'

This was not the first map to show a western audience the Gulag - The Polish soldiers Sylvester Mora and Pierre Zwierniak produced one to accompany their 1945 book Sprawiedliwość Sowiecka [Soviet Justice]. The present map, however, does far outstrips the 1945 work. Produced for the AFL-CIO by journalist Don Levine (with backing from the CIA and the State Department) it shows the installations of the Gulag with a much higher degree of granularity and precision, presenting a potent visual argument. The map was widely disseminated on both sides of the Iron Curtain. P.J. Mode, in Persuasive Maps reports:

In October 1951, 500,000 German-language copies of the map printed for an Austrian newspaper were seized by Soviet military police when the Austrian printer sent them for finishing to a shop in the Soviet sector of Vienna.

This and other efforts appear to have paid off: Austria regained its independence in 1955 and remained neutral to the letter of the agreement - but did so in the form of a western-model capitalist democracy.

This map was reproduced widely in many languages but appears to be scarce now on the market. Not in the Mode collection. OCLC shows copies only at the Deutsche Nationalbibliothek and the ZBW Deutsche Zenralibibliothek.

Isaac Don Levine (January 19, 1892 – February 15, 1981) was an American journalist. Born in Russia, Levine came to the United States in 1911. After finishing high school in Missouri, he began working for The Kansas City Star and then The New York Herald Tribune. He covered the Russian Revolution of 1917 for the Tribune and the Russian Civil War in the 1920s for The Chicago Daily News. He was a columnist for the papers of Hearst papers during the 1920s and 1930s. In 1939, Levine collaborated with famed defector Walter Krivitsky, a chief of military intelligence. Levine was the ghostwriter for a series of articles penned by Krivitsky about Stalinist Russia and his escape. Levine served the editor of Plain Talk, an anti-Communist magazine, from 1945-1950. He also played a role in the case against Alger Hiss, a State Department employee, who stood accused of being a Communist courier.

Excellent condition. No mends or blemishes.