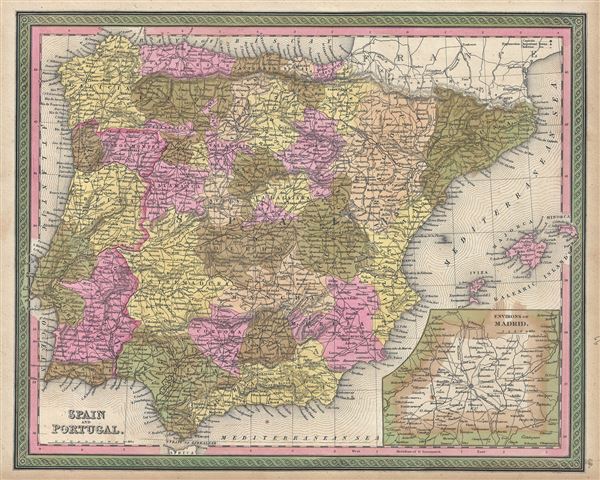 This is a fine example of Thomas Cowperthwait and S. A. Mitchell's 1849 map of Spain and Portugal. The whole is engraved and colored in Mitchell's distinctive style with green border work and vivid pastels. Political and topographical features are noted and color coded with elevation rendered by hachure. An inset map of the Environs of Madrid is featured in the map's lower right quadrant. Includes the Balearic Islands: Ibiza, Majorca and Minorca.

As this map was printed liberal sentiments within Spain were gaining popularity. This eventually led to the Progressive Biennium, in which the Progressive Party tried to replace the conservative liberalism of the Moderate Party with more radical liberalism. This map was prepared by S. A. Mitchell for publication by the Philadelphia firm of Thomas Cowperthwait & Co. as plate no. 49 in the 1849 edition of Mitchell's New General Atlas.