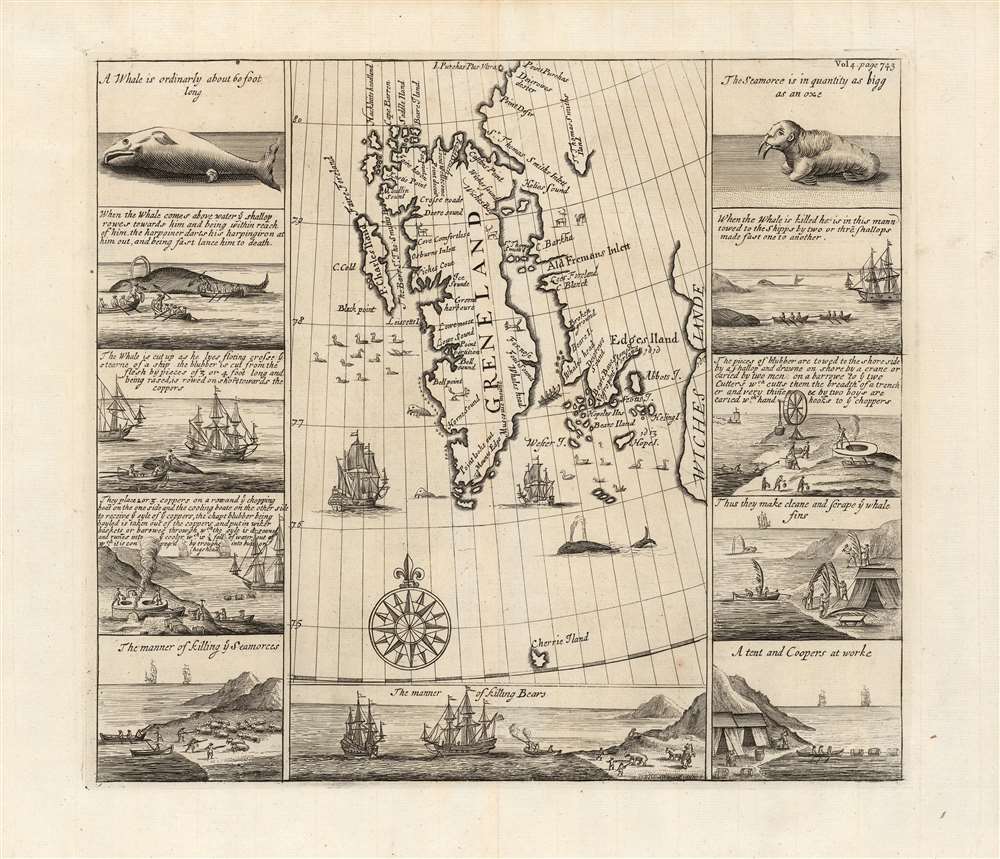 This is a superb, scarce map of Svalbard, printed in 1744. The mapping of the western portions of the archipelago - formerly known as Spitzbergen - is here very accurate, despite being erroneously labelled 'Greneland.' In its earliest version, printed by Samuel Purchas, it was attributed to Thomas Edge, an English whaler and seal-hunter who made a number of voyages to the region, and after whom several features on the map are named. For more than a century, this was the most detailed map of the Arctic archipelago.

The map is untitled, and the most prominent place name on the map is that for 'Greneland,' which was the English term for the islands the Dutch then called Spitzbergen, here referring to Svalbard island itself. To the west of it is Prince Charles' Island, now known as Foreland. The coastline of the aptly-named Nordaustlandet is confused: Edge, if indeed he composed the map, could not say whether it was another island or part of Svalbard itself, and he passes this bafflement on to the reader. Only the west coasts of Barents' Island and Edge Island are shown, and the passage dividing them - Freemansundet - is here referred to as Ald Fremans Inlett, suggesting that Edge suspected the two islands to be connected. At the eastern extreme of the map lies Wiches lande, which is either a representation of an insufficiently-distant Nova Zembla, or entirely imaginary, there being no corresponding land mass actually occupying the spot. In his account in Purchas, Edge only says of it that an English ship 'discoverd to the eastwards of Greenland (Svalbard) as farre to the North-Wards as seventie nine degreez, and an iland which he named Witches Iland, and divers other ilands as by the map appeareth.' By the description, this might refer to the Kong Karls Land islands, which the large coastline of the map's 'Wiches Lande' does not at all resemble.

The eleven scenes bordering the map, also informed by Edges' voyages to the islands, depict the whaling, walrus and bear-hunting which drew seventeenth century European sailors. Whaling, in particular, is shown in detail, including the means by which the whales were processed for their oil and blubber.

Thomas Edge and the Muscovy Company

The Muscovy Company was a joint-stock company initially chartered in 1555 to exploit a monopoly of trade between England and Russia. In 1577, Queen Elizabeth I extended the Company's charter to include a monopoly on whaling. The most profitable whaling grounds in the beginning of the seventeenth century were centered around Spitsbergen. In 1611, the company gave Captain Thomas Edge command of two ships for a whaling voyage. He wrote of the journey in his A Brief Discovery of the Northern Discoveries, published posthumously Purchas His Pilgrimes where it was accompanied by the first version of the present map. The details on the map, as well as the vignettes, were not intended as generalized descriptions of whaling, walrusing, and so on, but were depictions of specific events in Edge's journeys to which he referred in his text. Later publications of the map by the Churchill brothers would accompany accounts other than Edge's, a testament to its longevity.

This map was printed on at least two plates; the first appeared in Samuel Purchas' 1625 Purchas His Pilrimes; the second appeared in the fourth volume of Awnsham and John Chuchill's 1704 Collection of Voyages and Travels. A further edition of that work, printed in 1744, included this map as well, either printed from a much-reworked second or third plate. This example corresponds to the 1744 issue of the map. Churchill's Voyages and Travels, are well represented in institutional collections. Separate examples - possibly of the 1704 issue - are listed in the Danish National Library and the Royal Danish Library.

Awnsham Churchill (1658–1728) was an English bookseller; he was also a radical Whig politician who sat in the House of Commons from 1705 to 1710. He was the son of William Churchill and Elizabeth Awnsham, and brother of members of Parliament Joshua and William Churchill. Apprenticed to George Sawbridge, Awnsham became a Freeman of the Stationers' Company in 1681. He, with another brother, John, entered business as booksellers and stationers. They were politically engaged, and took part in opposition to James II of England, going so far as to consort with those supporting Monmouth's Rebellion in Amsterdam. Awnsham was arrested in 1687 for printing letters promoting William of Orange's policies of religious toleration. With the rise of William III, however, Churchill would flourish: he became stationer to the King, and a leading bookseller. He became a Whig Member of Parliament for Dorchester in 1705 and 1708. His radicalism led to his defeat in 1710, and a failed 1713 election attempt spelled the end of his political ambitions. Awnsham was friendly with John Locke, served as his publisher, and managed Locke's money and business - becoming his trustee after his death. Learn More...


Thomas Edge (1587/88 - December 29, 1624) was an English merchant, whaler, and seal hunter who worked for the English Muscovy Company in the first quarter of the 17th century. He went on seal-hunting voyages to Bear Island in 1609 and 1610, and commanded whaling voyages to Svalbard between 1611 and 1619. He recorded the events of his travels in A Brief Discovery of the Northern Discoveries, which would be published posthumously in the 1625 Purchas His Pilgrimes. In large part thanks to the map he produced to accompany his tale, his name survives in the toponymy of the islands. Edgeøya (Edge Island) takes its name from him as did Edge's Point, prior to its renaming as Lægerneset. Learn More...

Churchill, A. and J., A Collection of Voyages and Travels, Volume Four (London) 1744.