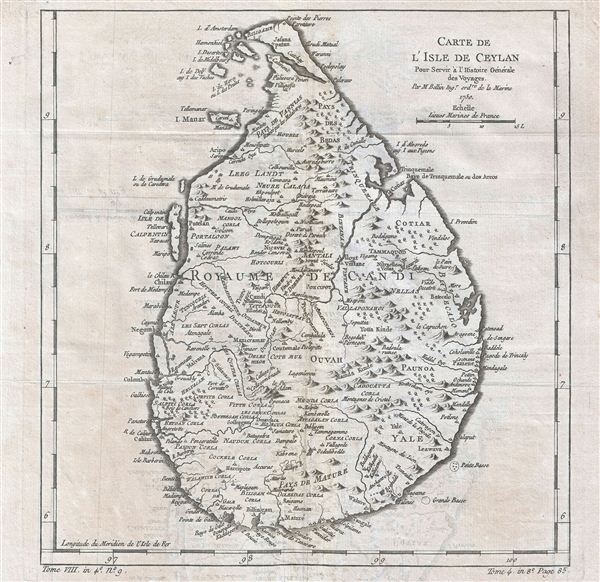 This is a 1750 Jacques-Nicolas Bellin map of Ceylon or Sri Lanka. The map depicts the entire island of from north to south, inclusive of the Isle de Calpetin, Isle Manar, and a group of small islands on the northwest shore. The well-defined coastlines detail capes, bays, and points as well as noting harbors including Colombo, Trinquemale, Chilaw, Negambo, Pamene. Also shows many small towns and villages throughout the island. During this period, control of Ceylon and the rich spice and tea trade that the island represented was hotly contested between the Dutch East India Company and the British East India Company. In 1782, the British captured the port and Fort Trincomalee, establishing a firm foothold on the island that would eventually lead to British sovereignty from 1796 to 1948.

This map was created by Jacques-Nicolas Bellin in 1750 for inclusion in Abbé Prévost's Histoire Générale des Voyages.

Very good. Blank on verso. Original platemark visible. Even overall toning. Some transference.
Looking for a high-resolution scan of this?