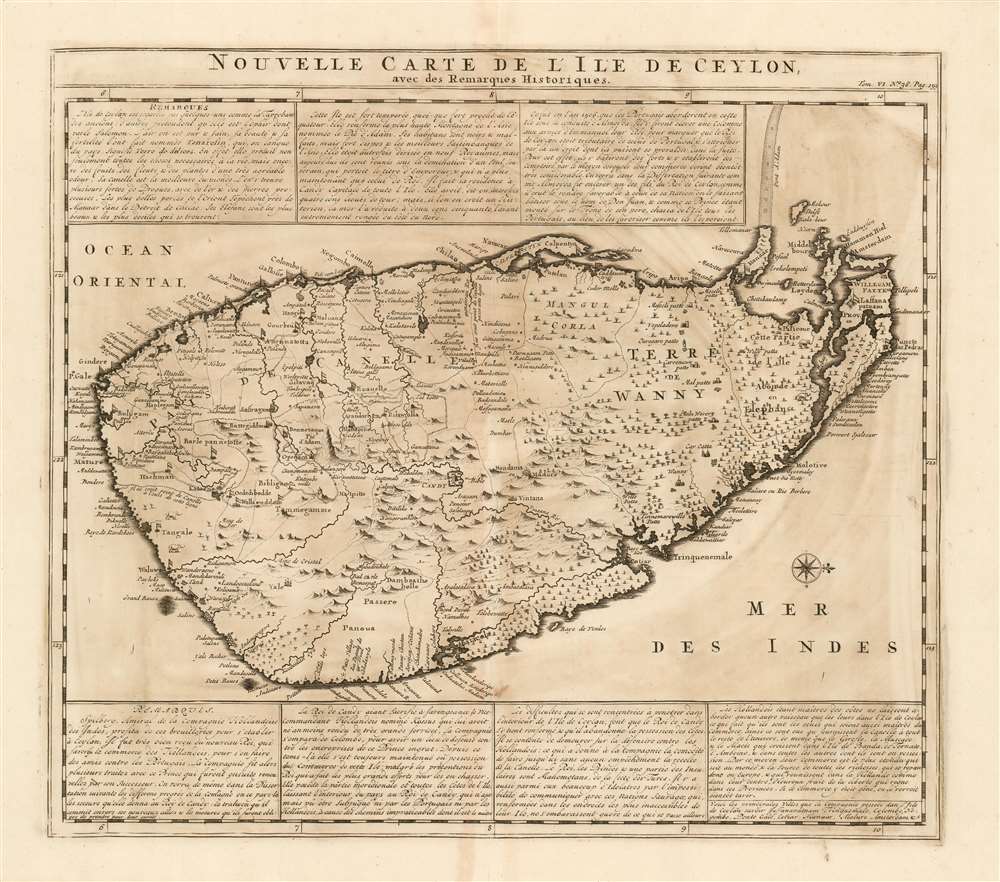 Sri Lanka, as a Dutch Entrepôt.

A superbly engraved 1719 Chatelain map of Sri Lanka, presenting to Chatelain's Francophone audience the distant island during the period after the Dutch wrested control of its trade from the Portuguese. The map is accompanied by seven boxes of French text describing the island's history and government, with a particular focus on the current state of affairs:

The Dutch, being masters of the coasts, do not allow any vessel other than theirs to dock on the island of Ceylon, which means that they are the only ones who are also masters of trade. Thus they are the ones who provide cinnamon to the rest of the universe, as well as cloves, nutmeg and mace which grow in the islands of Bantam, Ternate, and Amboyna...

This western-oriented map is a sharp improvement on the Dutch maps of the mid-17th century which show clear detail of the west coast, but little detail of the north and east coast. Nicolas Visscher's c.1680 Insula Ceilon olim Taprobana - which the Chatelain is either drawn from, or shares the same source with - illustrated significantly improved detail along coasts neglected in earlier maps. Jaffna and its peninsula are named (albeit 'Laffana', and shown as an island.) The chain of shoals connecting Sri Lanka to the Indian Peninsula, 'Adam's Bridge' is clearly defined. At the center of the island is the city of Kandy (Candy on the map) which was the capital of the last ancient kingdom of Sri Lanka.

Both this map and the Visscher share the same orientation, virtually identical toponymy, and roughly the same delineations of rivers and pictorial presentation of mountains and hills. The Chatelain omits notation from the Visscher that appears on the body of the latter map (in favor of the more expansive text that does appear.)

Chatelain’s Atlas Historique was published between 1705 and 1720; this map appeared in volume six, published in 1719. The Atlas Historique is well represented in OCLC, although this separate map is catalogued in only six institutional collections. The map appears in dealers' catalogues from time to time.