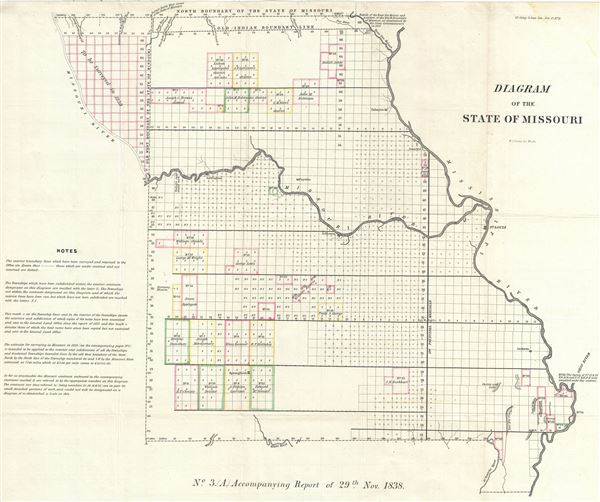 This is an impressive example of the 1838 public survey map of Missouri W. J. Stone. It covers the entire state of Missouri from the Mississippi River to the Missouri River. The map was prepared to illustrate the progress of the land survey work in Missouri, noted via a series of blocks representing the survey grid. Notes in the bottom left quadrant describe the various markings on the map. The towns of Fayette, Jefferson, Jackson, St. Louis, Springfield, Lexington and Palmyra are identified. The Indian boundary line as well as the north boundary of Missouri as determined by the State Commissioners in 1837 is noted. The map also notes important rivers, lakes, towns, swamps and other topography throughout. This map was issued by the General Land Office as No. 3 (A) accompanying the report of 29th Nov. 1838.

Report of the Surveyor General, (1838 issue)

Very good. Minor wear and toning along original fold lines. Minor spotting. Professionally flattened and backed with archival tissue.
Looking for a high-resolution scan of this?