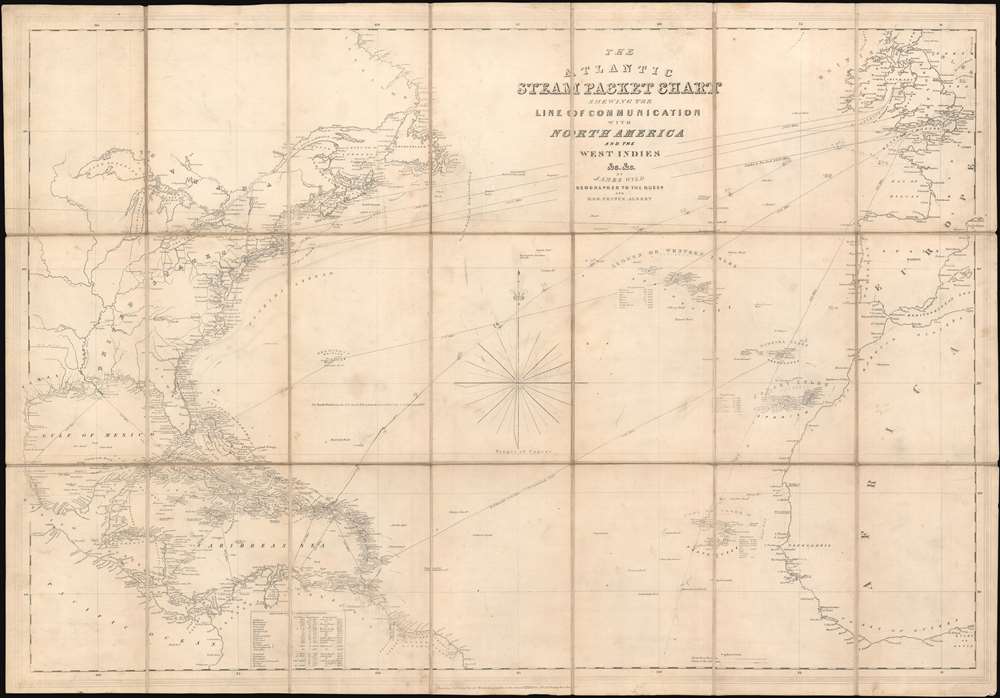 This is a c.1851 James Wyld map of transatlantic steam packet (steamships delivering mail) routes. The map depicts the region from Mexico to the North Sea and from Scotland to French Guyana and the Bight of Benin. Several routes are illustrated, with distances marked on each. Some routes are explicitly labeled, such as the London to New York route (3480 miles), while others have only distances between waypoints indicated. Two manuscript routes, one from Portsmouth to the Virgin Islands and another from the Lisbon to the Madeira Islands to the Cape Verde Islands and then further south, are also present. Tables provide census data for the Atlantic archipelagos, including the Azores, Canary Islands, Cape Verde Islands, and the British possessions in the West Indies.

Steam Packets in the mid-19th century

Letters that crossed the Atlantic would be sent to the port city and then forwarded from the port city's post office to the ship on the day of departure, typically Saturday in New York City. Since the arrival of steam packets was a major event at the time, their expected arrival and departure dates would be printed in local newspapers. Thus, senders would know which steamers would be arriving on what date and would even write the name of their intended ship on the letter, essentially providing routing instructions to postal workers. Once the mail arrived in its destination port, it would be delivered to the local post office, or, depending on the line carrying the mail, could be picked up dockside at the line's offices.

This map was created by James Wyld and published c. 1851. We dated this map based on our research of the transatlantic steam packet industry and the presence of entries in the OCLC. The British Library holds examples of a map bearing this title which it has dated to 1842 and 1851, respectively. We believe, based on our research, that the present example dates from 1851. The only example catalogued in the OCLC is the aforementioned at the British Library.