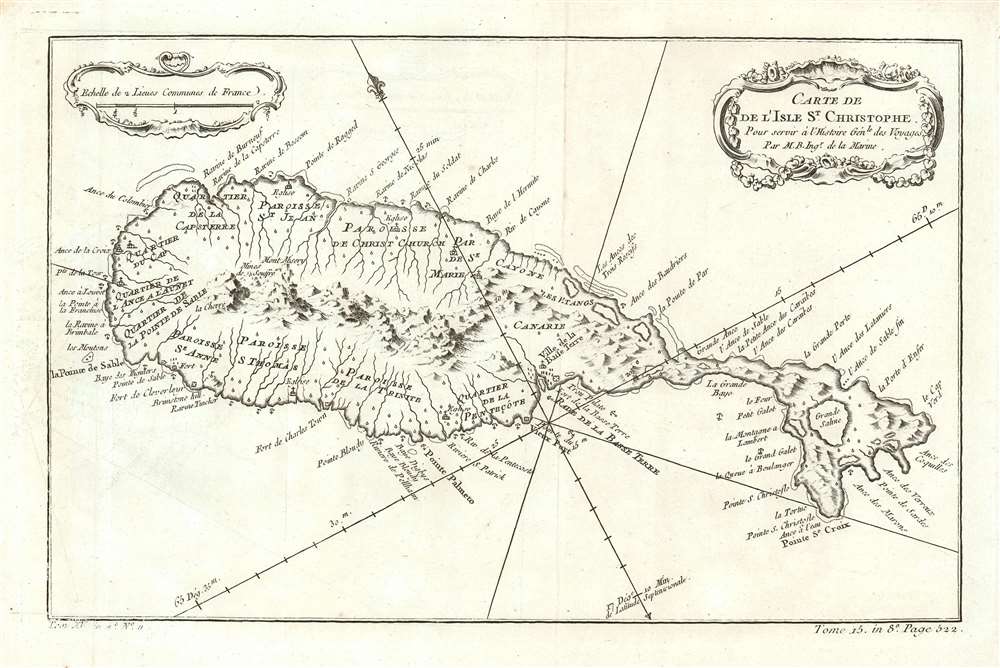 This is an attractive 1780 Bellin map of the Caribbean island of St. Christopher/ St. Kitts. The map is based on the surveys of Andrew Norwood, who died nearly a century prior in 1685. Norwood's survey also served as source material the maps of Moll, Bowen, and Mount and Page. During the course of the 17th century, the island saw the establishment of colonies by the English (1623) and the French (1625). The two colonial powers vied for dominance, cooperating only in the massacre of the indigenous Kalinago population, and interrupted only for a year by the 1629 Spanish occupation. Thereafter, the English and French partitioned the island, and it changed hands several times by both military action and treaty. By the time this map was printed, rule of the island passed to the British according to the terms of the Peace of Utrecht - although the place names reflect the French tenure on the eastern part of the island.

The map was executed in 1757 for inclusion in Prévost's Histoire générale des voyages, and was again printed in 1780 for Harpe's abridged edition of that work, one perhaps better known for its imaginative flourish than for its factuality. This map appears on the market from time to time, although OCLC only lists four or five copies of the separate map in this edition, though inconsistencies in cataloguing mean this number may be higher. Prévost's Histoire and Harpe's abridged version of it are well represented in institutional collections.