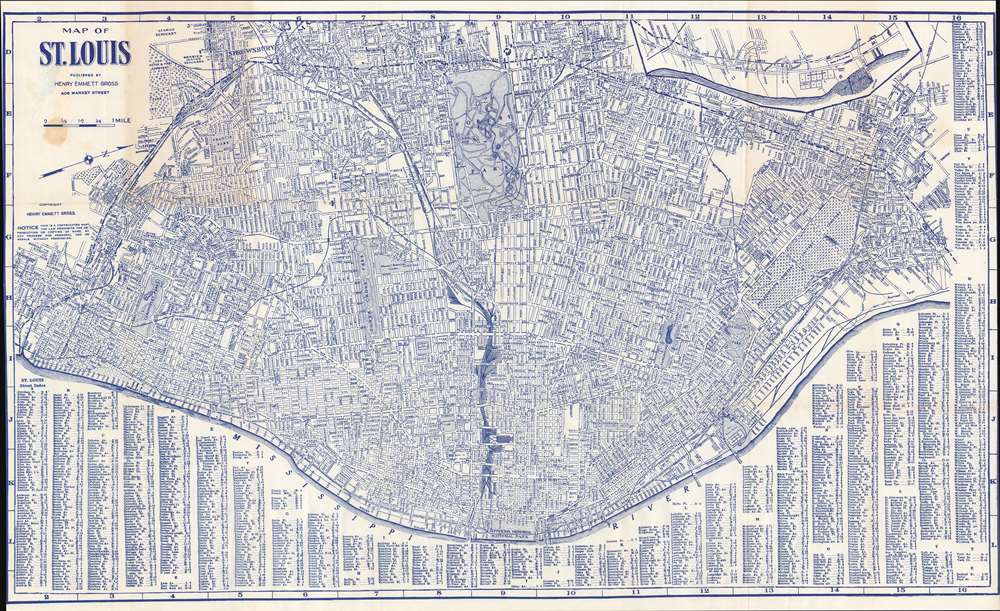 This is a 1959 Henry Emmett Gross city plan or map of St. Louis, Missouri, covering from Shrewsbury to the Mississippi River. Innumerable streets are identified throughout, as are city parks, including Forest Park and Francis Park. St. Louis was then and still is a railroad hub, numerous railroad lines run into town. An alphabetic street index appears along the bottom border.

This map was published by Henry Emmett Gross in 1959. While other editions of Gross's maps of St. Louis are cataloged in OCLC, the 1959 edition is not present in that database.

Henry Emmett Gross (August 8, 1906 - April 3, 1982) was an American engineer and map publisher. Born in Glendale, Missouri, in 1928 Gross received a bachelor's degree in engineering from the Missouri School of Mines and then went on to receive a master's degree in engineering from the University of Illinois. From 1936 until 1938, Gross taught petroleum engineering at the University of Oklahoma and then taught the same subject at Texas A and M from 1938 until 1942. During World War II, Gross lived in Chicago and directed the district engineering office of the federal government's Petroleum Administration for War. In 1945, Gross became the chief production engineer of the Kingwood Oil Company in Effingham, Illinois. However, he left a year later to take over the Gross Map Company in St. Louis. He owned and operated the Gross Map Company (which published maps of the St. Louis area) from 1946 until 1973 when he retired. The map company closed upon his retirement. Gross patented several inventions during his life, including a marine foundation for deep-water oil drilling and deep-sea salvage equipment for raising sunken ships, for which he became an honorary member of the Explorers Club. He married his wife, the former Margrete Brauer, in 1941 in Norman, Oklahoma. Learn More...

Very good. Verso reinforcement where originally attached to guidebook. Exhibits light toning. Exhibits light soiling below title over scale. Left and right sides trimmed to neatline as issued.
Looking for a high-resolution scan of this?