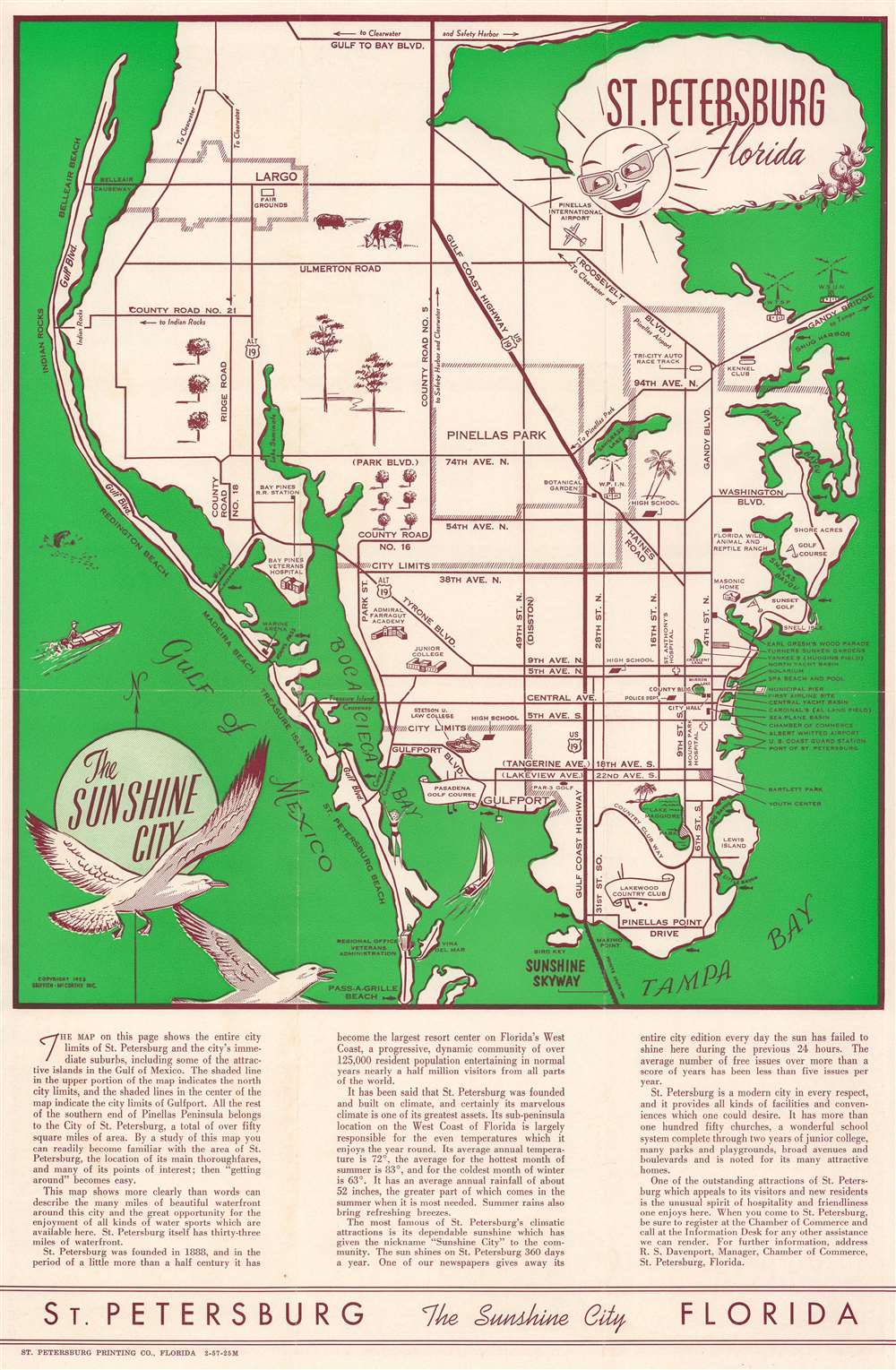 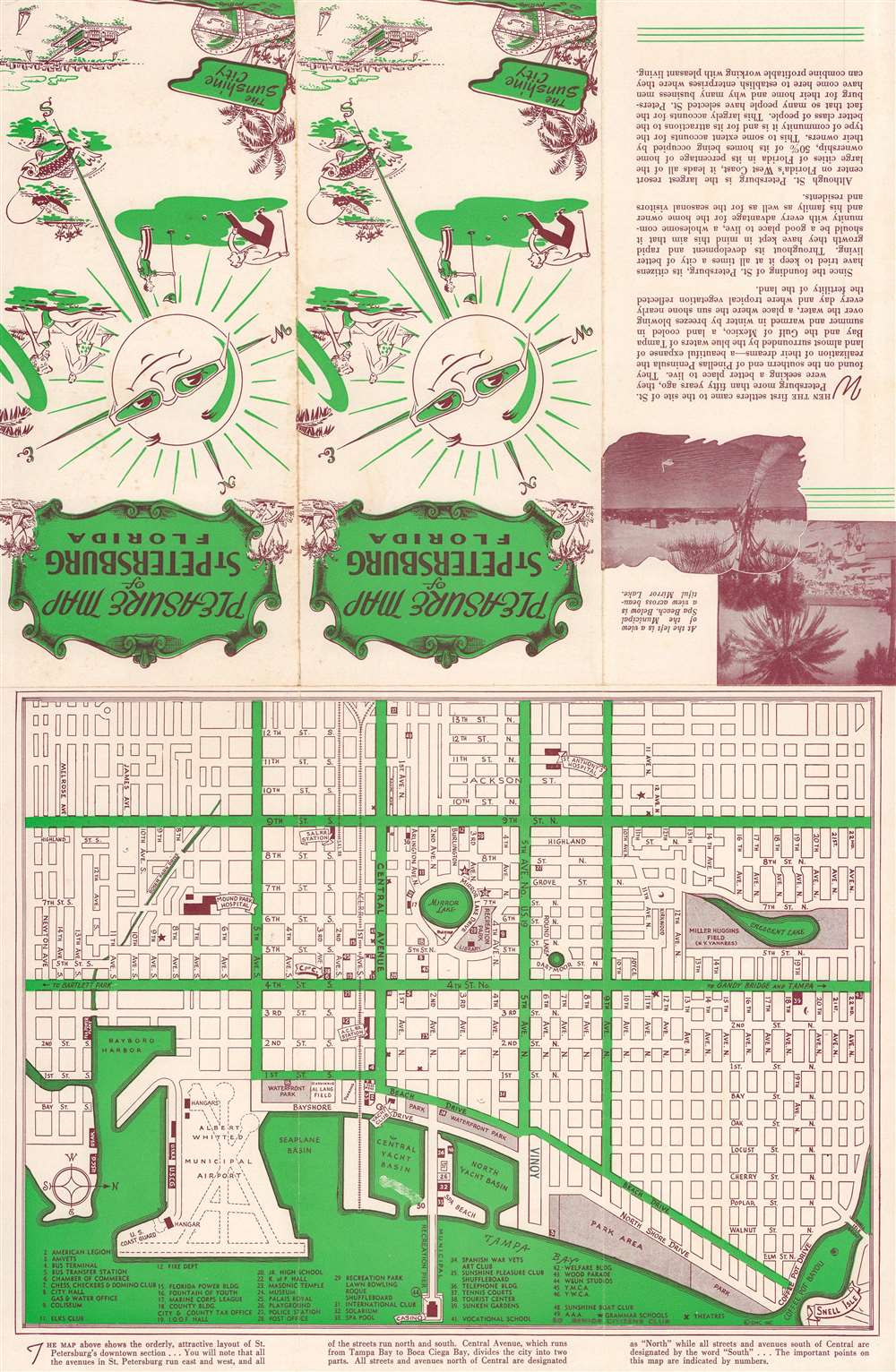 This is a 1953 Thomas Griffith and Robert McCarthy tourist map of St. Petersburg, Florida. Depicting the entirety of St. Petersburg, the map highlights the main thoroughfares and many points of interest around the city. Among these are the botanical garden, Lakewood Country Club, and the Florida Wild Animal and Reptile Ranch. According to the text along the bottom, studying this piece makes getting around St. Petersburg 'easy'.

On the verso, a detailed map of downtown St. Petersburg covers from 13th Street N. to Tampa Bay and from 22nd Avenue N. to Newton Avenue. Forty-nine locations are numerically identified and correspond with an index along the bottom border. The Mound Park Hospital, St. Anthony's Hospital, Mirror Lake, Crescent Lake, and Albert Whitted Municipal Airport are labeled directly.

Thomas Morris Griffith (November 4, 1895 - September 23, 1954) was an American advertising executive best. Remembered for creating St. Petersburg's mascot 'Mr. Sunshine'. Born in Montpelier, Ohio, Griffith graduated from Hillsdale College in Michigan and received a Master's degree from the University of Michigan in 1918. He served in the Navy during World War I and found a job in Detroit, Michigan working for an advertising agency after the war. Griffith worked for this ad agency for three years before deciding to open his own firm. In 1924, Griffith closed his agency in Detroit and moved his family to St. Petersburg, Florida, where his parents lived. He found a job with the C.C. Carr Advertising Agency soon after arriving in Florida. Griffith took over the C.C. Carr firm in 1930 and renamed it the Griffith Advertising Agency. Griffith's firm survived the Great Depression and then weathered World War II. Before World War II, Griffith had focused almost entirely on travel accounts, but diversified during the war to include commercial and industrial accounts. Griffith merged his firm with the Tampa-based R.E. McCarthy Advertising Agency in 1950 and was renamed Griffith-McCarthy Inc. Griffith-McCarthy grew into one of Florida's largest advertising agencies and had more than 100 clients at the time of Griffith's death in 1954. The partnership between Griffith and McCarthy ended after Thomas Griffith's death and Griffith's sons, Donald and. Joe Griffith, took over the firm. Donald and Joe continued to run the firm until 1968 when Joe Griffith left the firm and became the general manager of a dental chair manufacturing firm in St. Petersburg. W.M. Zemp and Associates bought the advertising firm in 1969 and Donald Griffith, who was the president of the Griffith Advertising Agency at the time of the sale, joined the Zemp staff. Learn More...


Robert Emmett McCarthy (May 22, 1892 - June 11, 1961) was an American advertising executive. Born in Washington, D.C., McCarthy spent his youth working in heavy construction, including a stint with the Foundation Company of New York where he worked on large bridge construction. He moved to Tampa in 1933 and opened the R.E. McCarthy Advertising Agency. McCarthy's firm merged with the Griffith Advertising Agency in 1950 and McCarthy became the executive vice president of the new firm, known as Griffith-McCarthy Inc. After Thomas Griffith's death in 1954, the partnership between Griffith and McCarthy dissolved. McCarthy created a new firm, R.E. McCarthy and Associates Inc. in Tampa, which he operated until February 1961. Learn More...