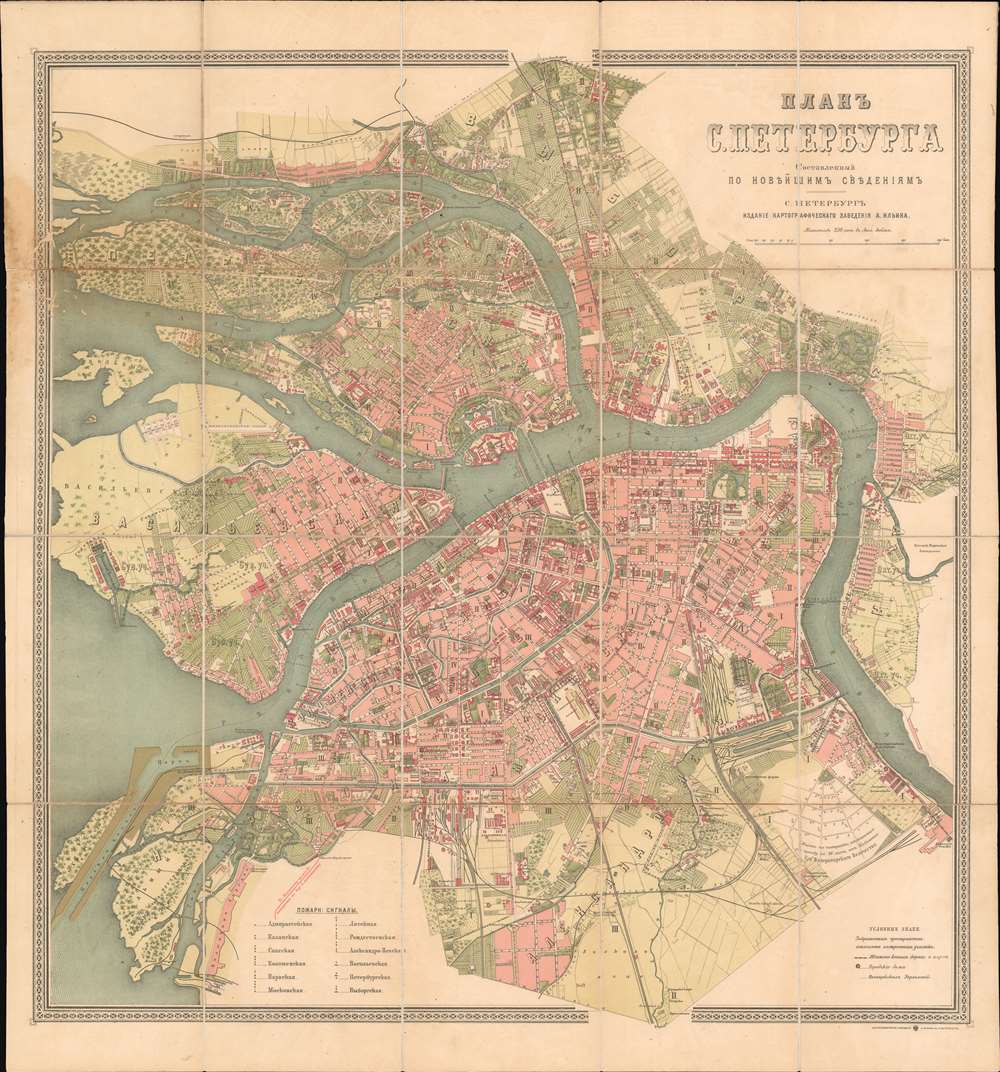 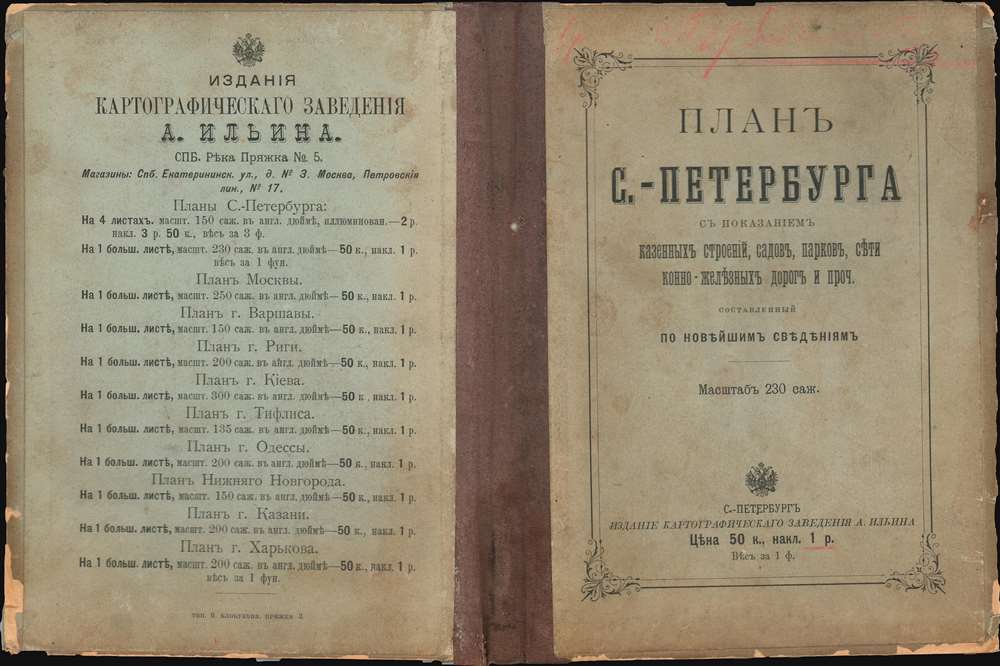 A rare and wonderfully colored city plan or map of St. Petersburg in Cyrillic.
$1,200.00

This is a beautiful c. 1887 Alexey Ilyin city plan or map of St. Petersburg, Russia. Brilliant red and green hues shade urban and open spaces, wonderfully blending the two. With all text in Cyrillic, St. Petersburg's streets, canals, bridges, and other structures are labeled. The Peter and Paul Fortress, the Mikhailovskoy Palace, St. Petersburg State University, and the Winter Palace (today home to the Hermitage Museum) are all identifiable. Railways and railway stations, industrial sites, horse-drawn trams, and special lands leased by the imperial crown to private individuals add even more detail to this fantastic piece.

This map was created and published by A. Ilyin's Cartographic Establishment c. 1887. We believe this map to have been published in at least two editions. We have been unable to verify which editions are held in these institutions, but we have traced six institutional examples. These are part of the collections at the Library of Congress, the University of California Berkeley, the National Library of Sweden, the University of Amsterdam, the National Library of Russia, and the University of Central Asia. We are also aware of one example of the earlier edition in private hands.

Alexey Afinogenovich Ilyin (Алексей Афиногенович Ильин; April 11, 1834 - December 4, 1889) was a Russian General Staff officer and map publisher. He was born in Shlisselburg, Leningrad Oblast, Russia. Ilyin founded the publishing firm 'Chromolithography of Poltoratsky, Ilyin, and Co.', with Vladimir Poltoratsky (1830 - 1886) in 1859 in St. Petersburg. Poltoratsky left St. Petersburg and the firm in 1864, and Ilyin changed the firm's name to 'A. Ilyin's Cartographic Establishment'. Ilyin became a lifelong map maker and printer and served as cartographer for the Military Topographic Depot of the General Staff. By the end of his life, Ilyin had risen to the rank of lieutenant-general. Following Ilyin's death, his son Alexey Alexeevich Ilyin (1857 - 1942) took over the business with the help of Ilyin other son, Afinogen Alexeevich Ilyin (1857 - 1904). The company reached its zenith in the 1880s, producing 6 million maps in 1882 alone, which accounted for nearly 90 percent of all civilian maps published in Russia that year. Aside from maps and atlases, A. Ilyin's Cartographic Establishment also published books about geography, Russian Geographical Society publications, and the proceedings of the Geological and Statistical committees and other government agencies. They also published textbooks on mathematics, chemistry, physics, astronomy, and foreign languages, among many other disciplines. A Ilyin's Cartographic Establishment was nationalized following the 1918 Russian Revolution and became the First State Cartographic Enterprise. The factory was transferred to the Ministry of Defense during World War II, known as the Great Patriotic War of 1941 - 1945 in Russia. It was renamed the 444th Military Cartographic Factory in the 1990s. Learn More...