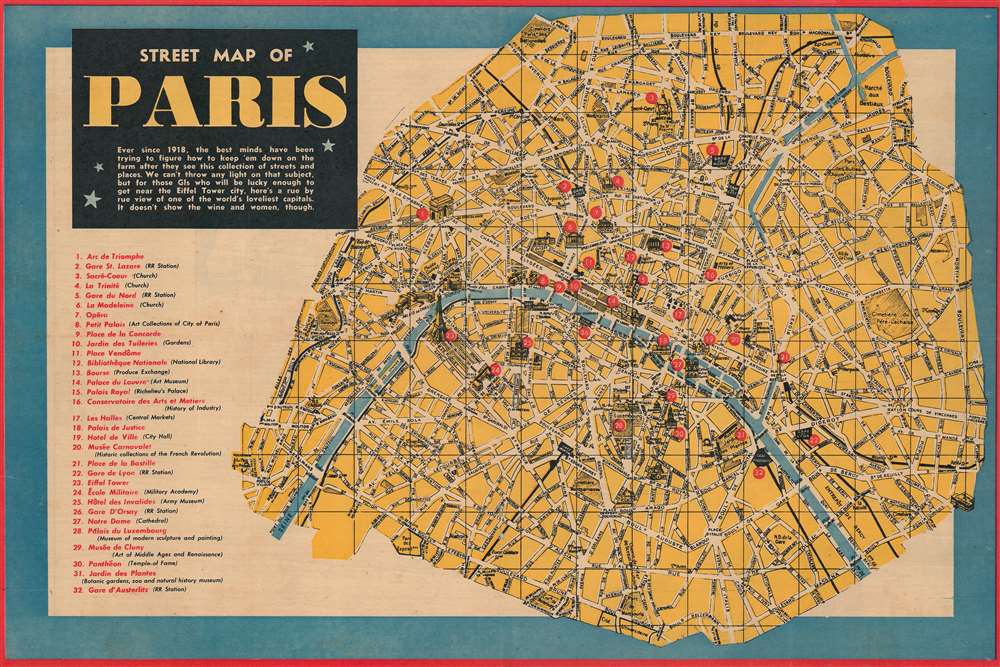 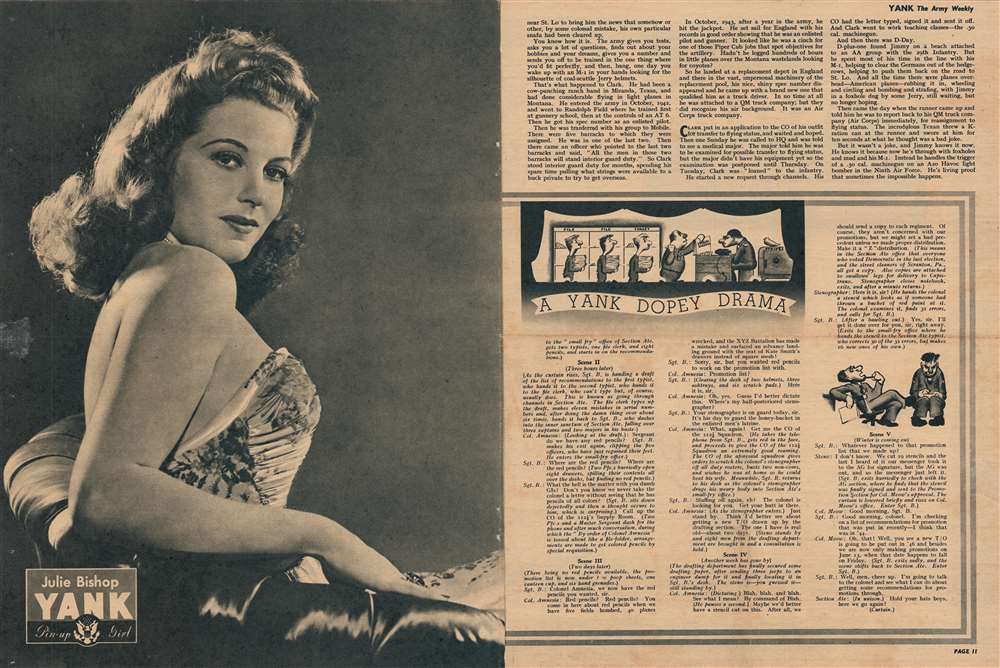 Created by U.S. Army soldiers for U.S. Army soldiers during World War II, this fantastic 1944 pictorial map of Paris published in Yank magazine highlights the fascination U.S. military personnel had with the City of Light. The map proclaims this desire to see Paris just below the title. The text reads:

Ever since 1918, the best minds have been trying to figure out how to keep 'em down on the farm after they see this collection of streets and places. We can't throw any light on that subject, but for those GIs who will be lucky enough to get near the Eiffel Tower city, here's a rue by rue view of one of the world's loveliest capitals. It doesn't show the wine and women, though.

Large red dots and pictorial illustrations mark thirty-two locations across the city sure to be on any visiting GI's 'must-see' list, including the Eiffel Tower (23), the Louvre (14), and Notre Dame. All Paris's train stations are marked, likely important places for any visiting GI because they might have to take a train back to their unit.

Yank, September 1, 1944.     Yank, the Army Weekly (June 17, 1942 – December 28, 1945) was a magazine published weekly during World War II by the U.S. military. The magazine, which was first available only to U.S. Army personnel overseas, appeared on June 17, 1942. Enlisted soldiers wrote the magazine and a few officers served as managers. Soldiers serving in the United States could get copies of the magazine beginning with the fifth issue (July 15, 1942) but Yank never appeared on newsstands for purchase by the public. Its circulation exceeded 2.5 million with twenty-one editions in forty-one countries. This meant that articles and photographs printed in Yank were written and created by soldiers for their fellow service members. One such article was the first English language interview with Marshal Josip Broz Tito, the communist revolutionary leader fighting the Nazis in Yugoslavia. The magazine featured sketches by artists Howard Brodie, Robert Greenhalgh, and Victor Kalin, along with numerous cartoons, among these were the famous Sad Sack cartoons by Sgt. George Baker. Yank was also famous for its pinups, which included Ingrid Bergman and Lauren Bacall. The magazine closed its offices on New Year’s Eve 1945. Yank was revived by the 1st Stryker Brigade Combat Team, 1st Armored Division in 2014