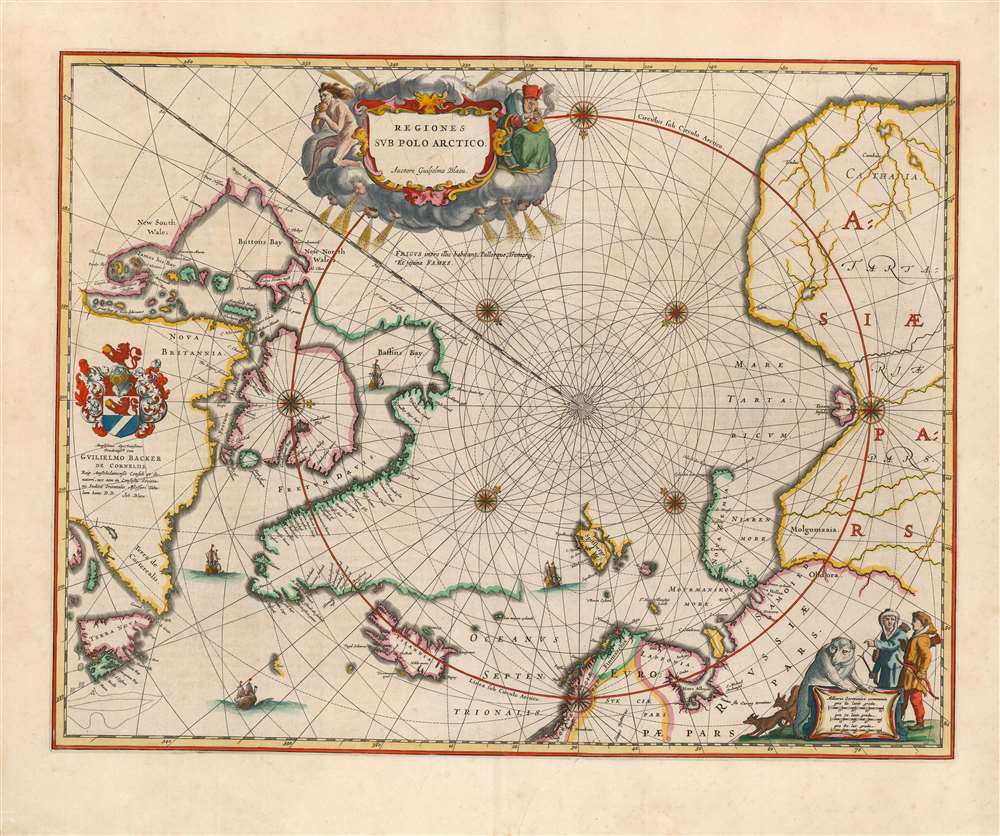 A Beautiful example of a Classic Dutch Map of the Arctic Regions.

This is Willem Blaeu's 1640 map of the Arctic, in a beautiful original-color example of the 1644 second state (with the superb dedicatory cartouche). The map covers from the North Pole south as far as Nova Scotia, James Bay, Iceland, and Norway. Blaeu has here abandoned the fanciful cartographic ideas of Mercator and Ortelius to produce an entirely new map based largely upon exploration and discovery. Those unexplored arctic lands surrounding the pole are left blank, rather than filled with the quartet of speculative land masses characterizing the maps of the 16th century; the fraudulent 'Frisland' has also been dispensed with. Greenland and the lands to the north of Baffin Bay and to the west of James Button Bay fade away. Even the eastern shores of Nova Zembla, and the northern shores of Spitzbergen, are left unmapped. By contrast, explored lands are shown in relative detail. The discoveries of James, Barentsz, Baffin, Frobisher, Hall, Davis, and others are noted. In particular, this map incorporates the discoveries of James along the southern and western shore of Hudson's Bay in 1631-32, and promotes the expectation that the Northwest Passage across northern North America did not exist.

This map first appeared without the dedicatory cartouche in the Latin and French appendices to the Blaeu atlas in 1640; as early as 1642 it was included - this time with the dedication, and with the additional imprint of the younger Blaeu - in regular issues of Blaeu's atlases, where it would continue to be published until the firm was ruined by fire in 1672. This example appeared in the 1644 Latin edition of Joan Blaeu's four-volume Theatrum Orbis Terrarum.