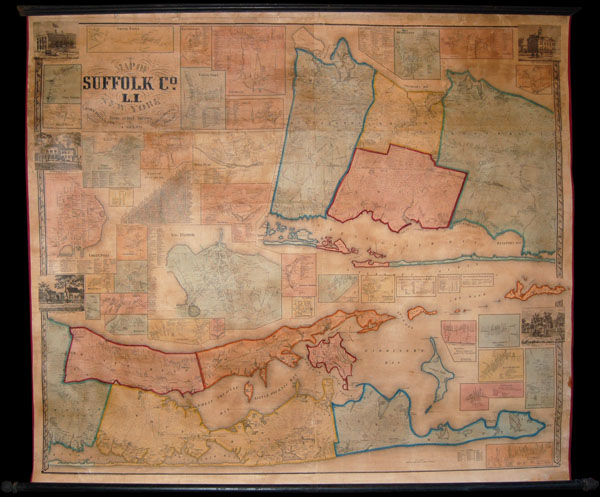 The finest wall map of western Long Island ever made.

Without a doubt, one of the finest wall maps of Suffolk County, eastern Long Island, ever made. This monumental 1858 wall map covers the eastern part of Long Island roughly from Huntington to Montauk. Divided into two main sections, upper and lower. The upper segment, mostly confined to the upper right quadrant, focuses on Huntington, Smithtown, Islip, and Brookhaven, including most of Fire Island and Oak Island. The lower section, and the primary focus of the map as a whole, covers the eastern extension of Long Island including both forks, Brookhaven, Riverhead, Southampton, Southold, and East Hampton, as well as Gardiners Island and Shelter Island. The upper left quadrants of the map as well as any empty zones in other sections are dedicated to detailed town plans. These include Cold Spring, Amityville, Smith town, East Setauket, Patchogue, North Port, Babylon, Riverhead, Penataquit, Port Jefferson, Greenport, Sag Harbor, Southold, Bridgehampton, East Moriches, Millers Place, Comac, West Huntington, Bellport, Center Moriches, Mattituck, Aquebogue, Jamesport, New Suffolk, Stony Brook, East Marion, Orient, South ort, Amagansett, East Hampton, Sayville, Southampton and Cutchoge. The detail throughout is extraordinary, with Chase's survey work being, by far, the most accurate and in depth study of the region undertaken in the first half of the 19th century. Chase notes roads, farms, bridges, and the individual family names of various properties. In addition to noting property owners and important households, chase also includes business directories for the largest and most important towns. There are additionally five engraved views including the Wyanbank House of Jeremiah Terry in Greenport, the residence of Stephen Haynes of Scuttle Hole, the Farmhouse of Elisha King of Good Ground, the Riverhead Courthouse, and the Summer Residence of C. W. and J. T. Moore of Aquebogue. The surveys for this map are the work of J. Chase Junior. The map was a joint publishing venture by Robert Pearsall Smith and John Douglass, whose adjacent offices were located at 517, 519, and 521 Minor Street, Philadelphia, PA. Dated and copyrighted, 'Entered According to Act of Congress in the Year 1858 by Robert Pearsall Smith in the Cleark's Office of the District Court of the Eastern District of Pennsylvania.'

Robert Pearsall Smith (1827-1899) was a well respected business man and religious leader in 19th century Philadelphia, PA. The son of the head librarian of the Library Company of Philadelphia, John Jay Smith, Robert Pearsall Smith was best known, in his day, for his religious devotion and essays on various aspects of the Quaker faith, especially the Holiness Movement. Pearsall Smith's most prominent work was Holiness Through Faith, published in 1879. In addition to Smith primary business as the manager of a Philadelphia Glass Factory, Pearsall Smith was an active map publisher. Smith's cartographic output, though small was significant and includes some of the first anastatic lithography in the United States. Smith's map publications are also significant in that they sponsored some of the most important and detailed regional surveys of Pennsylvania, New York, Connecticut, and New Jersey ever made. Smith's most notable maps include his wall maps of Philadelphia, PA, Suffolk County, NY, and Westchester County, NY. Smith's detailed cartographic work eventually inspired the regional maps produced by the Beers family later in the 19th century. Learn More...