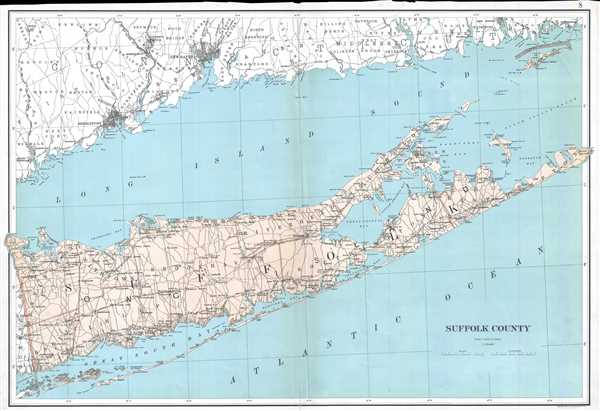 This is an 1895 Julius Bien map of Suffolk County, New York. The map depicts the region from Queens County to Fishers Island and from Connecticut to the Atlantic Ocean. Highly detailed, the map illustrates and labels all the municipalities of Suffolk County, including Southampton, East Hampton, Shelter Island, Islip, and Brookhaven. Numerous towns and villages are labeled throughout, and roads snake their way across the county in every conceivable manner. The Long Island Railroad is present. Fire Island is illustrated and labeled, along with Gardiners Island and Fishers Island.

This map was created and published by Julius Bien in 1895.

Julius (Julien) Bien (September 27, 1826 - December 21, 1909) was a German-Jewish lithographer and engraver based in New York City. Bien was born in Naumburg, Germany. He was educated at the Academy of Fine Arts, Cassell and at Städel's Institute, Frankfurt-am-Main. Following the suppression of the anti-autocratic German Revolutions of 1848, Bien, who participated in the pan-German movement, found himself out of favor in his home country and joined the mass German immigration to the United States. Bien can be found in New York as early as 1849. He established the New York Lithographing, Engraving & Printing Company in New York that focused on the emergent chromo-lithograph process - a method of printing color using lithographic plates. His work drew the attention of the U.S. Government Printing Office which contracted him to produce countless government maps and surveys, including the Pacific Railroad Surveys, the census, numerous coast surveys, and various maps relating to the American Civil War. Bien also issued several atlases both privately and in conjunction with a relation, Joseph Bien. At the height of his career Bien was elected president of the American Lithographers Association. After his death in 1909, Bien's firm was taken over by his son who promptly ran it to insolence. The firm was sold to Sheldon Franklin, who, as part of the deal, readied the right to printer under the Julius Bien imprint. In addition to his work as a printer, Bien was active in the New York German Jewish community. He was director of the New York Hebrew Technical Institute, the New York Hebrew Orphan Asylum, and president of the B'nai B'rith Order.