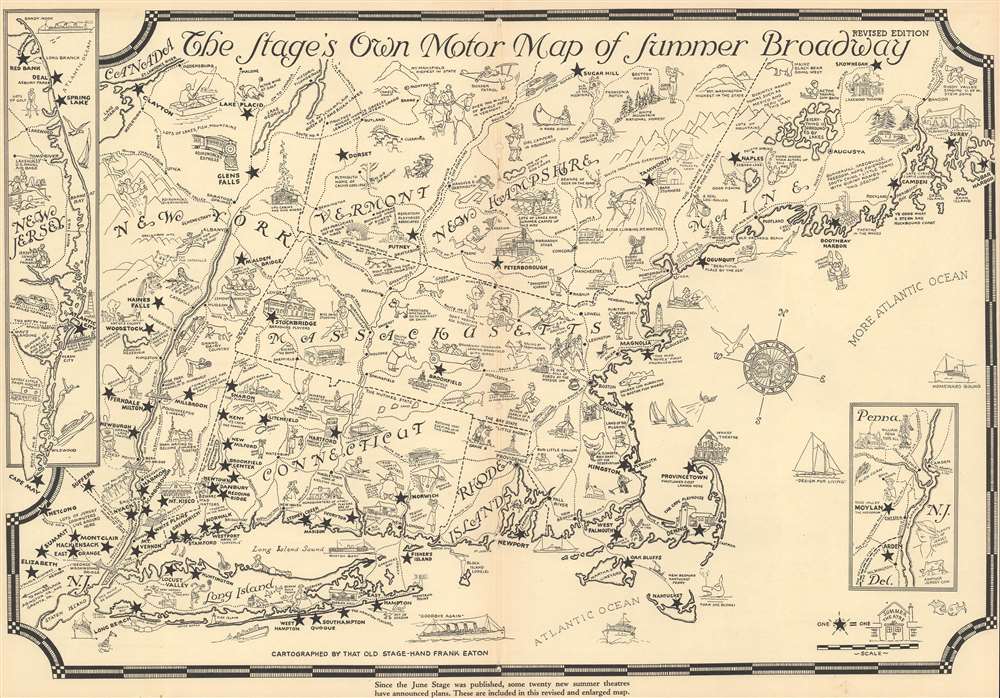 This is a 1933 Frank Eaton pictorial map of New England highlighting the region's playhouses. Black stars mark towns where playhouses host summer Broadway troupes, including Stockbridge (Berkshire Players), Dennis (The Cape Playhouse), Provincetown (Wharf Theatre), and Peterborough (Mariarden Stage). Interesting facts accompany some of these places, such as Hyde Park (home of Franklin D. Roosevelt - then President of the United States). Pictorial vignettes continue the map's charm and very from the comedic ('More Moose Than Actors This Way' in Maine) to informative ('Beware of Deer on the Roads' or 'Don't Hesitate to Ask Directions'). Dotted lines mark highways, old post roads, and even 'presumed' locations of Native American trails. An inset along the left border details the coast of New Jersey from Sandy Hook to Cape May, with illustrations of Atlantic City. A second inset in the lower right depicts from Pennsylvania to Delaware along the Delaware River and highlights Moylan and Arden.

In the American Theater world, Summer Theater (also known as Summer Stock Theater) features a stock cast that takes up residence in various 'resort' cities. They use stock scenery and perform either the previous season's hit Broadway shows or new shows being tested for Broadway. Broadway, film, and television stars regularly performed with the stock cast, and an elite social scene developed around the theaters.

This map was created by Frank Easton and published in the July 1933 issue of Stage Magazine. This is the only known cataloged example of the separate map. Surviving copies of Stage are also rare.

Frank Adair Eaton (January 23, 1887 - July 27, 1944) was a Canadian artist active in the newspaper, magazine, and advertising industry. Eaton worked as the rotogravure editor of the New York Tribune, until he left in 1924 when he became vice president of Underwood and Underwood. Then, he worked in the magazine industry from 1926 until 1942, when he was he was art director and managing editor for Stage magazine and then Art Editor at Cue magazine. He became advertising-publicity director for Pathe News in 1942. He married Helen McSweeney on February 2, 1921, with whom he had one child. Learn More...