1640 Ritter Sundial Map of the World 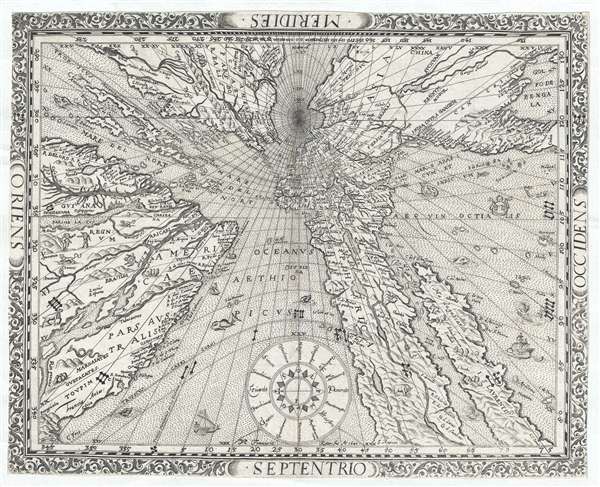 1640 Ritter Sundial Map of the World

A spectacular map of the utmost curiosity and unparalleled cartographic coolness, this is Franz Ritter's untitled 1640 map of the world on a polar gnomonic projection – often referred to as the 'Sundial Map.' Projected from the North Pole, Ritter's map covers about three fourths of the sphere, extending south as far as Patagonia and southern Madagascar, both of which run off the map. The continents appear wildly distorted by common convention due to the map's unusual projection, in which the scale adjusts according to distance from the North Pole. Consequently, the further a landmass is from the North Pole, the larger it appears. Here, the continents of the Southern Hemisphere, Africa and South America, dominate the page. Although strange to our eye, the projection is on sound mathematical footing.

This type of projection is generally referred to as a sundial or gnomonic projection, after the 'gnomon' or that part of the sundial that casts a shadow. Such maps thus inextricably link time and geography. In the words of map historian John P. Snyder,

The gnomonic projection has a direct connection with sundial design. The angles between the hour markings on a sundial designed for a particular latitude are identical with the angles between the meridians on a gnomonic projection centered at the same latitude, counting each 15 degrees of longitude from the central meridian as one more hour from noon. To allow one to read time, the gnomonic map is first rotated so that the north pole is south of the center of projection rather than north. Then the triangular gnomon of the sundial is placed with its base along the central meridian and its shadow-casting back touching the north pole on the map. The local sun time is indicated by the meridian along which the shadow of the sun then falls. (Snyder, J., 'Map Projections in the Renaissance,' The History of Cartography: Cartography in the European Renaissance, Vol III, p. 379 – 380)

Ritter's gnomonic projection is uncommon and did not attract a significant following, possibly due to the fact that he trained no apprentices to carry on his legacy. Other gnomonic maps do exist but they typically follow different models.

When studying this map most cartobibliographers focus on the map's peculiar projection to such a degree that much of its interesting geographic content is ignored. We will briefly review it here.

Only limited parts of North America are present, but the St. Lawrence is readily identifiable, as is Florida, which is labeled. Between Florida and the Appalachian Mountains (which appear miss-mapped on an east-west axis) another river, possibly the River May or a miss-mapping of the Savannah River, extends inland to the northwest. Further south in the Gulf two major river systems are evident. The larger of these two extends significantly inland from a large bay and has many branches, resembling the Mississippi River. This is the Bay of Espiritu Santu. The Bay of Espiritu Santu is something of a mystery and appeared on many early maps of the Gulf, but is difficult to associate definitively with any specific large coastal inlet. We believe it may reflect early reports of Matagorda Bay. Likewise, the great inland river system, may be based upon De Soto's reports of the Mississippi River, but predates any actual exploration of that river.

South America is large and richly illustrated with substantial content derived from Sir Walter Raleigh. Both the Orinoco River and the Amazon river are obvious. Between the two is a vast inland sea, Lake Parima (Parime Lacus). This great sea appeared on many early maps and was believed to be the site of the Legendary El Dorado, which is here illustrated as a marvelous city labeled 'Manoa.' Lake Parima was first identified by Sir Walter Raleigh in the 16th century - though he admittedly never saw the lake himself. Raleigh associated the lake with indigenous legends of Manoa and the supposed site of El Dorado. The reality of Lake Parima and the Manoans is based upon Raleigh's misinterpretation of local trade networks. The Manoas were a river trading tribe based on the Amazon. Each year during the rainy season flooding on the Orinoco and Parima Rivers would create a large flood plain in the Rupununi Savannah, opening channels of trade between the two otherwise unconnected regions. Raleigh misinterpreted these watery trade channels as a great lake and connected it to El Dorado due to the supposed richness of the Manoans.

Further south, another great inland sea appears connecting the Amazon and the Paraguay (Payana) Rivers. Although here identified as the Lacus Eupana, this is doubtless a mapping of the Lago de Xarayes, an apocryphal inland lake at the northern terminus of the Paraguay River. 'Xarayes' is a corruption of 'Xaraies' meaning 'Masters of the River.' The Xaraies were an indigenous people occupying what are today parts of Brazil's Matte Grosso and the Pantanal. When Spanish and Portuguese explorers first navigated up the Paraguay River, as always in search of El Dorado, they encountered the vast Pantanal flood plain at the height of its annual inundation. Understandably misinterpreting the flood plain as a gigantic inland sea, they named it after the local inhabitants, the Xaraies. The Laguna de los Xarayes almost immediately began to appear on early maps of the region and, at the same time, almost immediately took on a legendary aspect as the gateway to El Dorado. Later missionaries and chroniclers, particularly Diaz de Guzman, imagined an island in this lake and curiously identified it as Paradise,

...an island [of the Paraguay River] more than ten leagues [56 km] long, two or three [11-16 km] wide. A very mild land rich in a thousand types of wild fruit, among them grapes, pears and olives: the Indians created plantations throughout, and throughout the year sow and reap with no difference in winter or summer, ... the Indians of that island are of good will and are friends to the Spaniards; Oregon they call them, and they have their ears pierced with wheels of wood ... which occupy the entire hole. They live in round houses, not as a village, but each apart though keep up with each other in much peace and friendship. They called of old this island Land of Paradise for its abundance and wonderful qualities.

Africa is elongated such that it stretches the entire length of the map. In the shrunken north part of the continent, the Nile is mapped on the Ptolemaic two-lake model. Further south, another river system appears that extends from a great inland lake southward past Sofala (Cofala / Mozambique) to beyond the borders of the map. Madagascar, given its distance from the North Pole, is correspondingly enormous, covering nearly half the map in length. The Madagascar pirate haven of l'île Sainte-Marie, modern day Ambodifotatra, is identified and oversized.

The map also offers a richness of illustrations including blemmyes (men with heads in their chests) or Raleigh's Ewaipanoma, a leopard, a turtle, a large snake (possibly an anaconda), and a long-eared goat (possibly a llama) in South America. There are elephants illustrated in southern Africa. The oceans are alive with a wealth of sea creatures, including a sea dog and what appears to be a janus-finned mer-person. A labeled wind rose is situated at bottom center.

Ritter introduced this projection in the 1607 edition of his Speculum solis; das ist, Sonnenspiegel. That example was simplified, much smaller, and incorporated into sheet with ten horological diagrams. Having attracted some interest, the map was subsequently elaborated upon and enlarged to a full page for the 1610 edition of the Speculum Solis. It was engraved by P. Troeschel in Nuremberg. There are two states of the map, the 1610 first state, and this, the 1640 second states. Other than the imprint, there are no substantial differences between states.

Franz Ritter (15??-1641), also known as 'Franciscum,' was a German mathematician, cartographer, and astronomer active in Nuremberg during the first half of the 17th century. In cartographic circles Ritter is admired for his introduction of an unusual gnomonic projection. Ritter's took no apprentices and consequently many of his cartographic innovations were forgotten after his death. Learn More...

Very good. Trimmed to neatline with no evidence of loss. Blank on verso.
Looking for a high-resolution scan of this?