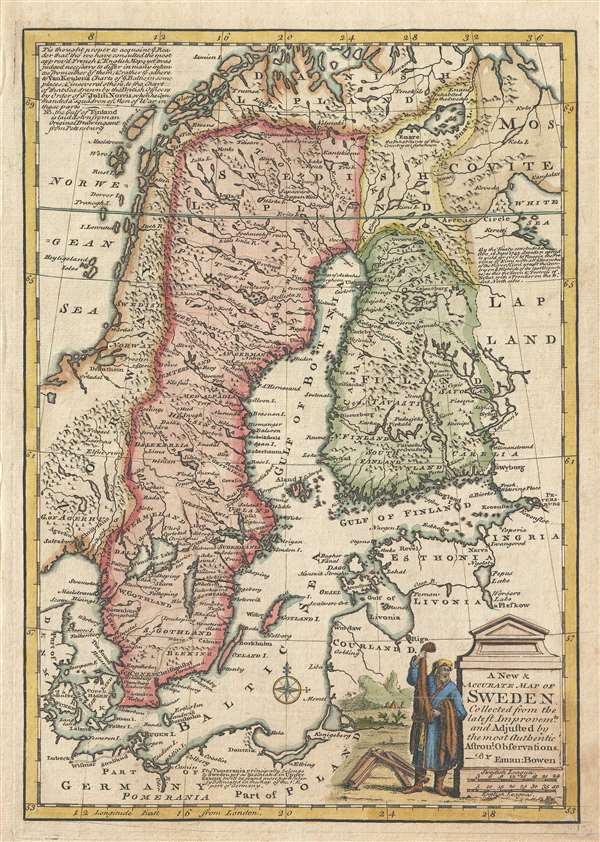 This is an attractive 1747 map of Sweden by the Welsh cartographer Emanuel Bowen. It covers Sweden and Finland (shown as part of Sweden) as well as parts of modern day Estonia, Latvia, Denmark and Poland. It notes important towns, cities, rivers, roads and other topographic features.

Of particular interest is cartographer's depiction of the legendary Lofoten Maelstrom (Maalstrom) in northwestern Norway. This legendary whirlpool was the inspiration for Edgar Allen Poe's classic short story Descent into the Maelstrom. In reality, it is a periodic and powerful current caused by tidal variations in the region.

The map makes reference to the Treaty of Abo or the Treaty of Turku, a peace treaty between Sweden and the Russian Empire following the Russo-Swedish war of 1743, in which Sweden ceded the province of Kymengard and the fortress of Nyslot to Russia.

Included is a beautifully illustrated title cartouche in the lower right quadrant. This map was prepared by Emanuel Bowen as plate no. 27 for the 1747 issue of A Complete System of Geography