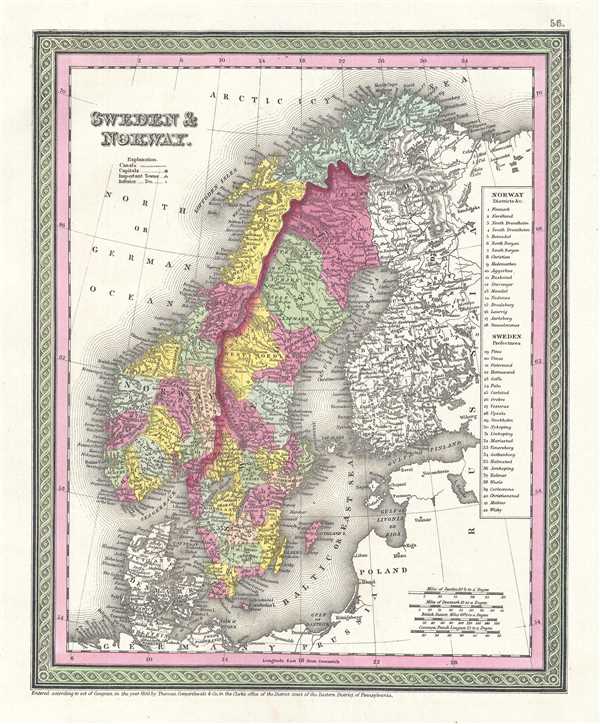 This is an 1854 Thomas, Cowperthwait and Company and Samuel Augustus Mitchell map of Sweden and Norway. The map depicts the region from the North Sea to Russia and from the Arctic Ocean to Germany and Prussia. Numerous cities and towns are labeled throughout Norway and Sweden, as well as in Finland and Denmark. Districts in Norway and Prefectures in Sweden are each colored differently, allowing for easy identification. A table along the right border lists these districts and the prefectures, which are numerically identified. Myriad rivers and lakes are also labeled, along with other physical features in the region. Engraved in Mitchell's distinctive style, the whole is surrounded by his iconic green border.

This map was prepared by S. A. Mitchell for publication by the Philadelphia firm of Thomas Cowperthwait & Co. as plate no. 56 in the 1854 edition of Mitchell's New General Atlas.

Mitchell, S. A., A New Universal Atlas Containing Maps of the various Empires, Kingdoms, States and Republics Of The World, (Philadelphia: Thomas Cowperthwait) 1854.     The New Universal Atlas is one of the great American atlases of the mid-19th century. Samuel Augustus Mitchell first issued the atlas in 1846 when he acquired the map plates and copyright for Tanner's New Universal Atlas from its publisher, Carey and Hart. The first transitional 1846 edition was published jointly with Carey and Hart, but a second edition was published in the same year with the Tanner imprint erased. This edition of the atlas also introduced the signature S. A. Mitchell green and pink color scheme. Most of the maps from the early editions of the atlas were engraved by H. N. Burroughs or C. S. Williams, often bearing their copyright. Burroughs maps also tended to have what map collector David Rumsey refers to as the 'Cary and Hart' borders, which featured a narrow vine motif. These borders were replaced, along with the Burroughs imprint, with the more traditional Mitchell strap work border used in the atlases until 1856. Mitchell published editions until late in 1850, when he sold the rights to Thomas, Cowperthwait and Company of Philadelphia. Under Cowperthwait, the atlases continued to be published and bear the Mitchell name until 1856, when it the plates were again sold, this time to Charles Desilver. Desilver reworked the plates with new border art and a revised color scheme in the style of J. H. Colton. Desilver issued editions from 1857 to 1860, when the atlas was phased out in favor of Samuel Augustus Mitchell Jr.'s New General Atlas.