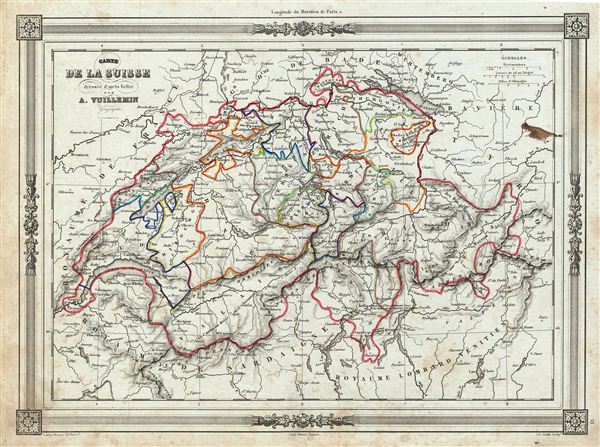 An uncommon and extremely attractive 1852 map of Switzerland. The map covers the entire country and shows the division by Cantons from Vaud to Grisons. Also shows parts of adjacent France, Germany, and Italy. Throughout, the map identifies various cities, towns, rivers and assortment of additional topographical details. Switzerland at this time was undergoing a rapid social and economic change known as the Regeneration Movement. Following the French July Revolution in 1830 the Swiss began assemble and call for fair representation and new cantonal constitutions. Many of the cantons subsequently established representative governments and instituted freedom of the press and trade. The map features a beautiful frame style border. Prepared by A. Vuillemin for publication as plate no. 15 in Maison Basset's 1852 edition of Atlas Illustre Destine a l'enseignement de la Geographie elementaire.

Very good. Blank on verso. Minor foxing throughout. Small discoloration near the right margin over Bavaria.
Looking for a high-resolution scan of this?