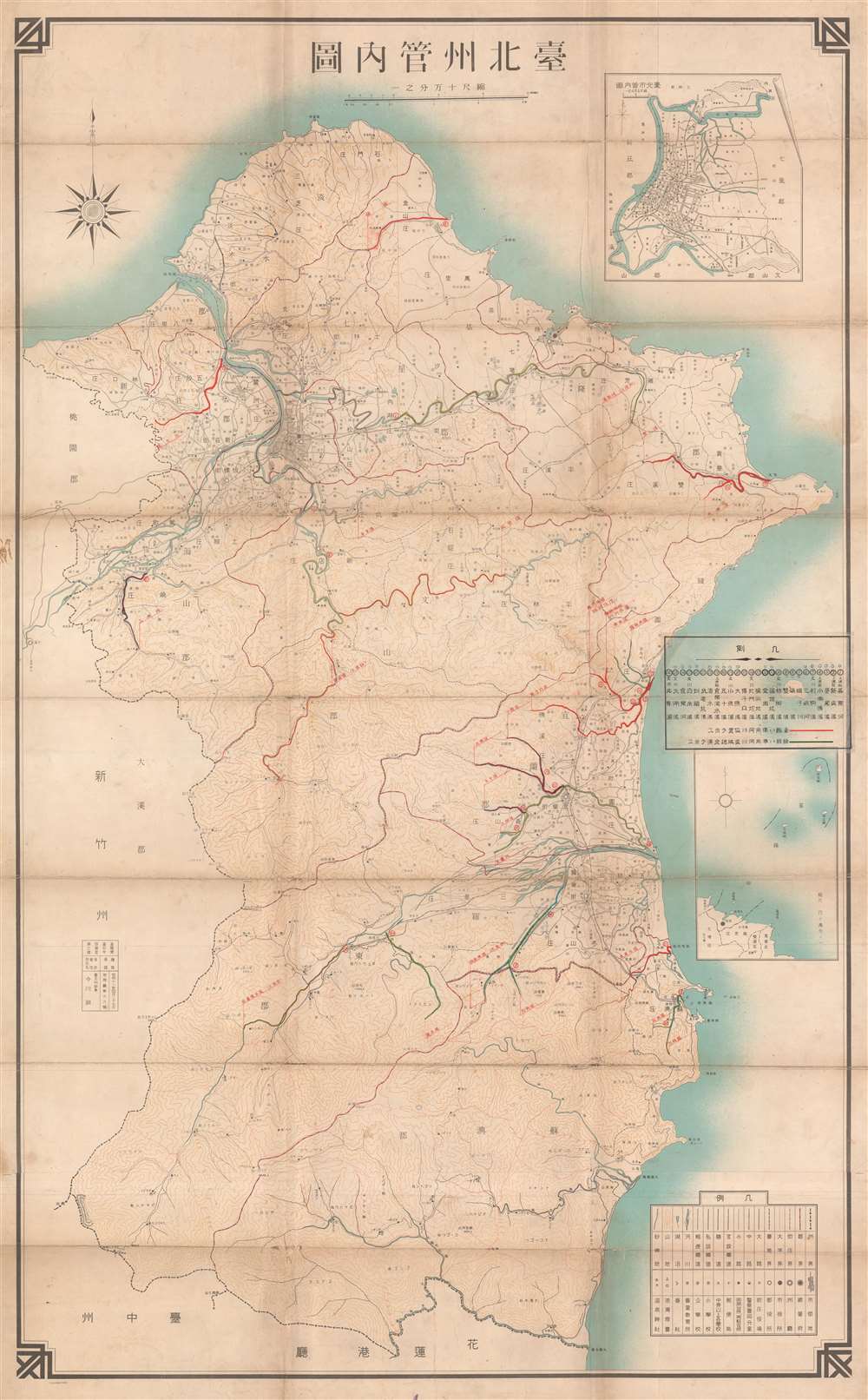 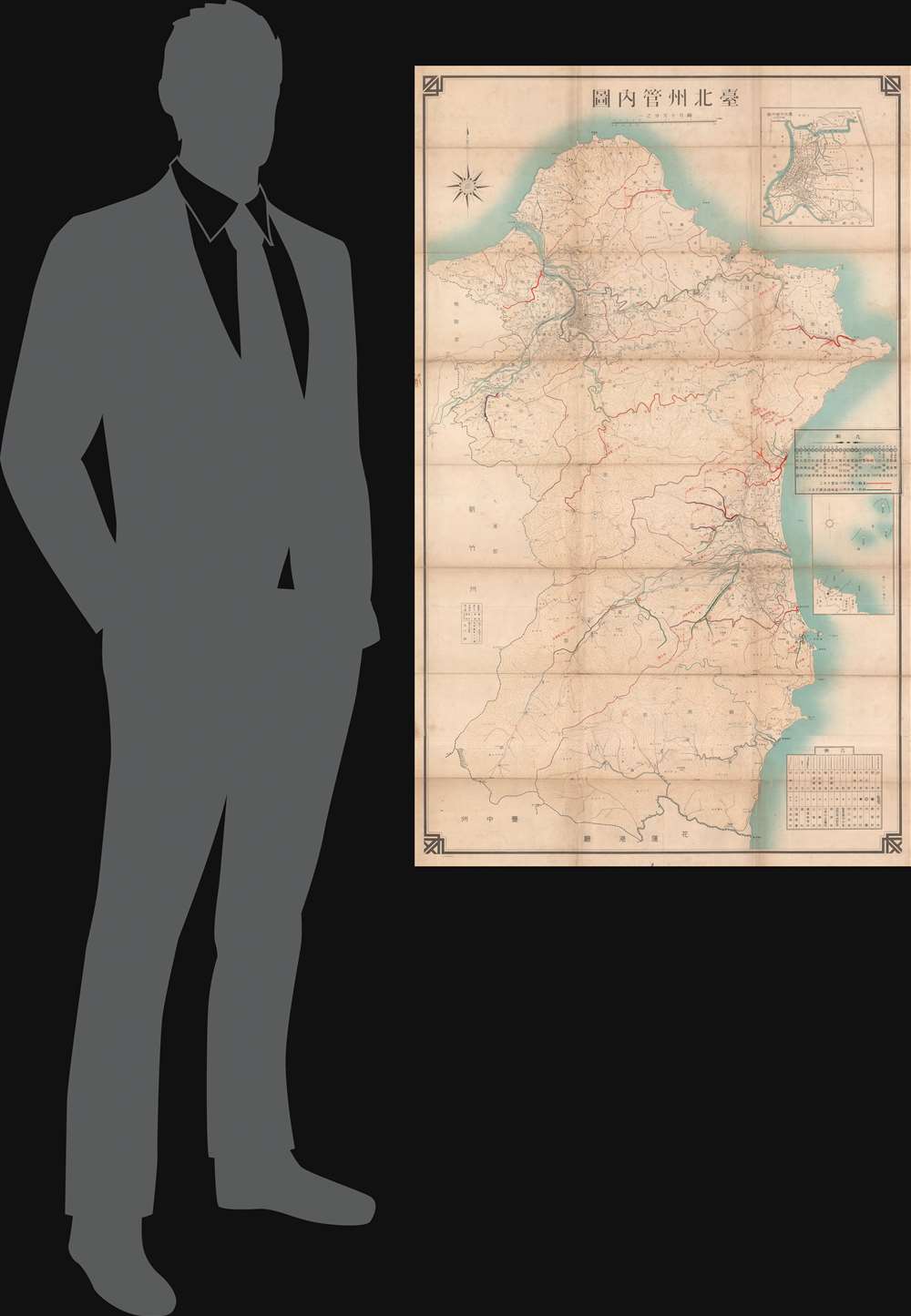 era, including inlets detailing Taipei City (1:50000 scale) and the outlying islands of Keelung (1:400000). The legend at bottom-right indicates topography, administrative boundaries, roads, railways, government offices, post offices, police stations, schools, lighthouses, aboriginal villages, areas for placer mining, and Shinto shrines. The map includes updates, annotations, and a manuscript pastedown legend at the center-right, suggesting significant, unique hands-on administrative use. The pastedown legend and printed annotations (in red) refer to creeks and rivers, while the green and red lines indicate the standards for use (urban versus non-urban), suggesting that this map was used by a water management bureaucrat in the Civil Engineering Department (臺北州內務部土木課).

The Japanese Empire gained control of Taiwan from the Qing Dynasty in the Treaty of Shimonoseki (April 17, 1895) at the end of the First Sino-Japanese War (1894 - 1895). Despite periodic unrest throughout the colonial period (1895 - 1945), Taiwan was seen as a 'model colony' because of its economic usefulness to the empire and the relative success of policies to inculcate a sense of Japanese identity among the island's population. The initial period of colonial rule saw strict military control and the suppression of uprisings, including by a nascent Taiwanese independence movement; the legacy of this violence can be seen in the prevalence of police offices and stations on the map (警察署同分室 and 同派出所 同駐在所). Approaches towards Taiwan changed throughout the colonial period depending on the Governor-General, the Prime Minister and government in Tokyo, and wider political shifts of the imperial era. Although assimilationist (同化) policies had been in place since the 1910s, these efforts intensified greatly after the start of the Second Sino-Japanese War (1937 - 1945), when Taiwanese were strongly pressured to speak, dress, worship, and otherwise live as Japanese did in the home islands, including using Japanese names and serving in the military.

This map dates from the peak of the 'colonial modernity' era. Japan's colonial venture in Taiwan can be viewed as similar to the 'civilizing mission' of Western empires in their showcase colonies, and revolved around compulsory public education, sanitation and public health, infrastructure, urban planning, changes in manners and mores, and economic development. The documentation and management of waterways, which was this map's apparent purpose, were important pieces of this wider colonial project. As the capital of colonial Taiwan, Taipei (Taihoku) was the focal point of colonial modernity in Taiwan. The Chinese-style walled city that predated Japanese rule was destroyed and the city center was rebuilt with the layout that can be seen in the inlet at the upper-right of the map.

Taiwan was also important for Japan economically, serving as a major source of agricultural goods and raw materials. The colonial government quickly moved to control irrigation canals and expand hydraulic engineering to allow for the intensive cultivation of sugarcane, rice, and pineapples, which were then largely exported to the home islands or other places in Japan's empire. Mining was also a central feature of Taiwan's colonial economy, as evidenced by the large number of railways to the east of Taipei City (on the upper-right portion of the map). Early in the colonial period, Japanese surveyors were sent into the mountainous, aboriginal regions south of Taipei, which had remained uncontrolled and unmapped by the Qing. Highland aborigines were confined to tightly-policed cordons so that the natural resources of these areas could be exploited. In particular, aboriginal areas were rich in camphor trees, which had a variety of industrial, military, and pharmaceutical applications, and which could be shipped down waterways to coastal ports. Aboriginal resistance to Japanese encroachment occurred throughout the colonial period, resulting in several extremely brutal military campaigns. These campaigns were followed by the establishment of dozens of police stations, which oversaw many administrative functions in aboriginal regions, including Japanese-language education at schools for aboriginal children (蕃童教育所, indicated on the map). Japanese attitudes towards aborigines were, at best, paternalistic, as seen in the 1943 propaganda film Sayon's Bell (サヨンの鐘), featuring the star actress Yoshiko Yamaguchi and celebrated director Hiroshi Shimizu. This film is set in Suō District (蘇澳郡), at the bottom-right of the map. Therefore, this map reflects the overlap between resource extraction, environmental management (specifically water), policing, and cultural assimilation in Japan's colonial project in Taiwan.

This map was produced on April 27, 1936 under the auspices of Taipei Prefectural Governor Imagawa Fukashi (臺北州知事 今川 淵) with the assistance of the Keelung Fortress Headquarters (基隆要塞司令部). It was drawn and executed by Sumimoto (住許) - of whom we have been able to unearth no information. There are a number of similar maps from different years (1931, 1935, 1938, 1941, 1942, 1943, and 1947) in libraries, archives, and for auction in Taiwan and Japan, suggesting that the map was updated regularly, possibly annually.

Good. Wear and toning along old fold lines. Slight loss and repair at some fold interceptions. Overall toning. Some soiling.
Looking for a high-resolution scan of this?