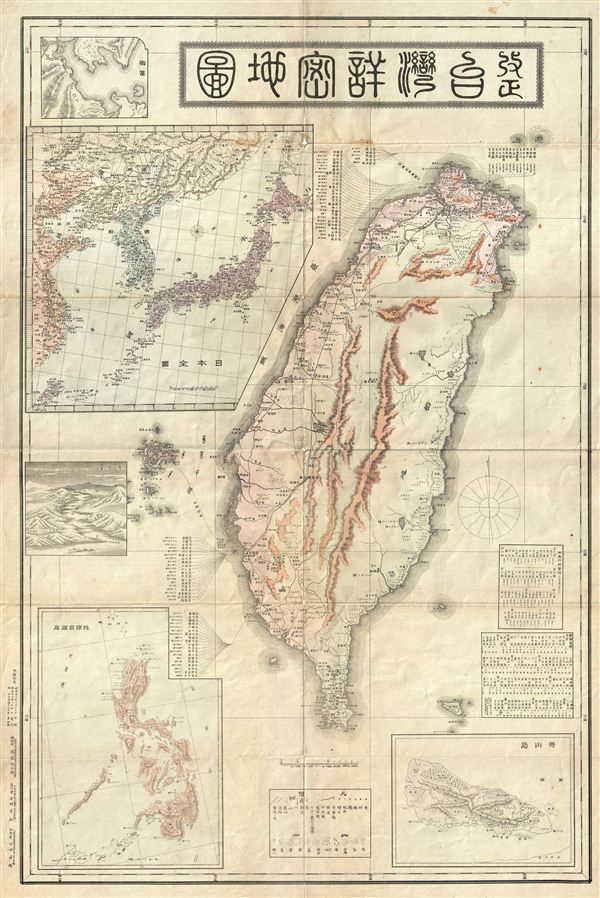 One of the earliest Japanese maps of Taiwan.

An extremely rare and early Meiji 29 or 1896 Japanese Map of Taiwan or Formosa Island. Covers the entire island in considerable detail showing cities, towns, roads, railways, and topographical features. Some nautical routes between Taiwan and the Pescadores and between Taiwan and Japan are noted. Features insets of Keelung Harbor, Dangshui Harbor, Zhoushan Island and the Philippines. A regional overview appears in the upper left quadrant.

This is one of the earliest Japanese printed maps of Taiwan that we have encountered, following, as it does, shortly on the 1895 Japanese invasion of Taiwan. The empire of Japan invaded the short-lived Republic of Formosa following the Qing China's cession off Taiwan to Japan at the end of the Sino-Japanese War. Five decades of Japanese rule would ensue. Though earlier maps of Taiwan by Chinese and european cartographers do exist, this is one of the earliest Japanese maps of Taiwan as part of the Dai Nippon Teikoku or Japanese empire

Good condition. Some verso repairs on original fold lines.
Looking for a high-resolution scan of this?