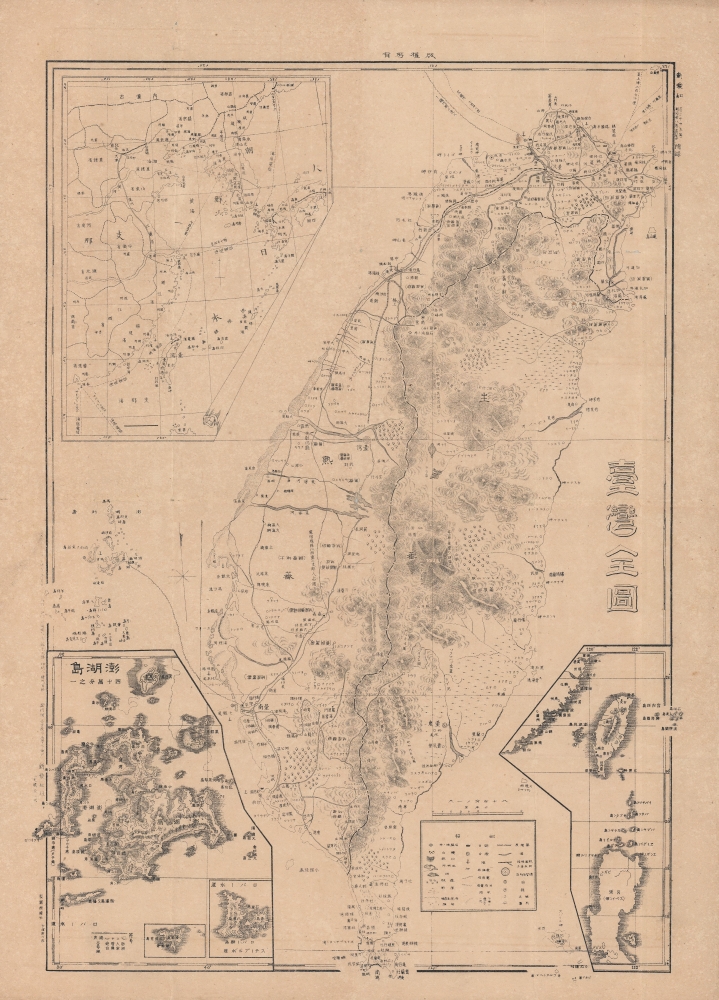 A rare 1895 Shinaichi map of Taiwan published in the early days of Imperial Japan's conquest of the island in the closing phase of the w-sj1. It was issued as a supplement to Shin Aichi, an important regional newspaper based in Nagoya.

The main island of Taiwan or Formosa is presented with detailed information on roads, railways (both extant and planned), telegraphs, waterways, elevation, mines, resources, shipping lines, ports, lighthouses, and administrative divisions. Somewhat less detail is provided on the island's southeastern half, which was home to aboriginal groups that were divided from the island's western half by a physical and cultural barrier, though this was more permeable than one might assume.

This map fits into the genre of Japanese maps published during the First Sino-Japanese War, with a surge of Taiwan maps in the wake of Japan's invasion of the island. It is distinctive compared to other maps in the genre in its use of upside down text to indicate resources. It also is especially detailed, given its extensive legend and multiple insets, which are: at top-left, the East China Sea and surrounding lands; at bottom-right, Taiwan in relation to Luzon (Philippines); at bottom-left, the Penghu Islands, itself with insets of some of the outlying Penghu Islands.

The background to Japan's occupation of Taiwan can be dated to the Meiji Restoration (1868). Recognizing that one of the common elements among all foreign powers was colonies, the leaders of the Meiji Restoration set their eyes on building up both an informal and formal empire in East Asia. As a distant and often-ignored vassal state of the Qing, the Ryukyu Kingdom was an obvious place to begin imperial expansion. Taiwan was likewise an enticing option. Though a part of the Qing empire, the Japanese rightly determined that the Qing were not especially interested in the island. By the time the Qing court recognized the problems that foreign rule of Taiwan would cause, it was already too late.

Following the Opium Wars, and especially after the Japanese established a de facto protectorate over the Ryukyu Islands in 1872 and launched a military expedition to Taiwan in 1874, the Qing realized the vulnerabilities that would be created if Taiwan were captured by foreign powers (the French also tried to invade it in 1884). They established more direct administration of the island, elevating it a province in 1887, and appointed a modernizer, Liu Mingchuan (劉銘傳), as governor. Liu oversaw the construction of schools, fortifications, and a railway, completed in 1893, seen here connecting Keelung (基隆) and Taipei (臺北), almost reaching Siangshan (香山) just south of Hsinchu (新竹). It was planned to continue to Taiwan-fu (that is, Taichung) and Tainan, but was not completed before Liu had to leave Taiwan for health reasons. Under the rule of Imperial Japan, which invested heavily in railways, the 'Taiwan Trunk Line' was completed in 1908.

Japanese forces invaded Taiwan in May 1895, after it was ceded to them by Treaty of Shimonoseki (April 17, 1895) at the end of the First Sino-Japanese War (1894 - 1895). The occupation of Taiwan fit into Imperial Japan's Nanshin-ron (南進論) or Southern Expansion Doctrine, which argued that Taiwan, Southeast Asia, and the Philippines were essential to Japan's economic survival and territorial growth. Katsura Taro (1747 - 1913), a Yamaguchi Samurai, wrote of Taiwan's significance, 'It is not only the most ideal location for expanding power to southern China, but also the islands in Southeast Asia.'

Although there were some indigenous attempts at resistance and self-governance, including the founding of the 'Republic of Formosa,' arguably Asia's first republic, the Japanese were quickly able to suppress organized opposition, though guerilla warfare would continue for several years. In less than six months, Japanese forces achieved, with the arguable exception of the tribal central highlands, full control of the island. Taiwan was Japan's first major extraterritorial holding, and Imperial Japan worked diligently to transform it into showpiece 'model colony,' lavishing resources on the island's economy, including public works and industrial development, while also pursuing cultural Japanization.

This map was published on May 27, 1895 (Meiji 28) as a supplement to Shin Aichi (新愛知), a newspaper based in Nagoya. It is only listed among the holdings of the National Museum of Taiwan History and is very scarce to the market.

Shin Aichi (新愛知; 1888 - 1942) was a newspaper and publishing house based in Nagoya. In the interwar period, it became one of the more influential newspapers in Japan after the powerhouses based in Tokyo and Osaka. During the Second World War, in the course of a government mandated consolidation of newspapers, it was merged with the Nagoya Shimbun, the predecessor to today's Chunichi Shimbun (中日新聞). Learn More...